Pablo Picasso was an innovative artist during the 20th century and used to experiment with his works. One of his most famous works; ‘Guernica’ is without a doubt one of the most powerful. Guernica is a town in Basque Country which during the Spanish Civil War in 1936 to 1939, was considered as the central point of Basque culture. This war started as Manuel Azaña, a Republican, was the president of Spain when a group of the most influential generals from the part of the Spanish army carried out a revolution led by General Francisco Franco.

Don't use plagiarized sources. Get your custom essay on
“ The Tragic Story Behind Pablo Picasso’s Guernica ”
Get custom paper
NEW! smart matching with writer

Spain, therefore, broke out into civil war. In 1937, Picasso accepted the commission for a painting in the Spanish Pavilion of the Paris exposition. Three months later, German bombers attacked Guernica in which three days later, General Francisco Franco’s troops occupied the town. On the 1st of May, Parisians protested, and Picasso began his sketches for his painting; ‘Guernica’ (Figure 1).

‘Guernica’ is an anti-war symbol as it shows the tragedies of war and all the suffering during this harsh time.

This was first exhibited in The Spanish Pavilion where it was used as propaganda to show the people that it was still in power. At the time, art was used as a weapon. Pablo Picasso was inspired to paint this piece of art as he thought about the news of the German aerial bombing of the Basque town. He had seen photos of this in the French newspaper L’Humanité. This painting was also sent on an international tour so that people could gain awareness about the Spanish Civil War.

This work of art is painted on a large canvas, using oils, and can be seen in the Museo Reina Sofia in Madrid.

There are many interpretations of what ‘Guernica’ symbolizes which even contradict each other. This is as Picasso never gave a specific explanation of his symbolism. The painting depicts a room full of nine moving characters, including six humans and three animals in pain or dying. The two main elements of this composition are the rampaging bull (Figure 2) and the horse, which are also important elements in Spanish culture as stated by historian Patricia Failing. Picasso used these two images throughout his career as an artist as when he was younger, he used to go watch the bullfights. One can also see many victims of the bombing, a man with a sword and a corpse in the foreground. The bull is shown on the left side of the painting showing no emotion at all, which contrasts the usual rage of a bullfight. In this case, the bull represents Fascism, as this remained a threat at the time.

Underneath the bull, one can see a wailing woman (Figure 2) with a dead child in her arms. This is believed to represent how much women suffered during the war. Picasso painted a horse (Figure 3) which people believe it either represents the people of Guernica in agony or a symbol of freedom. The man with the sword is probably the matador and the sword is assumed to be the one used to kill the bull. Three women are also seen on the right with their faces in fear. This can be shown as their eyes are dislocated and their tongues are shapes like daggers, while one is seen shouting in horror. Another one of the women is seen holding a light in her hands. Some people believe that this symbolizes the last few remains of the Enlightenment and any form of rational thinking in Europe.

When one looks at Picasso’s work, it clearly appears chaotic and the viewer can understand the intensity in more depth. Since he originally painted in the cubist style, characteristics such as the use of collage and the creation of flatter space can also be seen in ‘Guernica’. The elements in this painting seem jumbled together which creates confusion. Due to this, Picasso balanced the work by creating three groupings for the figures having the central figures within a large triangle of light.

Picasso mainly uses the ‘color’ black in this painting as it’s rather monochromatic compared to his previous use of color in his works. This contributes to the disturbing idea the painting gives out to the public. In the center of this composition, Picasso created a texture that resembles a newsprint.

Picasso said that “It isn’t up to the painter to define the symbols. Otherwise, it would be better if he wrote them out in so many words. The public who look at the picture must interpret the symbols as they understand them.” Thus, the fact that ‘Guernica’ doesn’t have one particular meaning kept it as timeless and universal as it was when it was painted. This is also as its general idea is ‘anti-war’, which has continued relevance to the population as there have been many wars and brutality since. ‘Guernica’ was exhibited in the Museum of Modern Art in New York for many years, until 1981, where it was sent back to Spain. This is as Picasso always asserted that the painting belonged to the Spanish people and is currently in the Museo Nacional Centro de Arte Reina Sofia in Madrid. 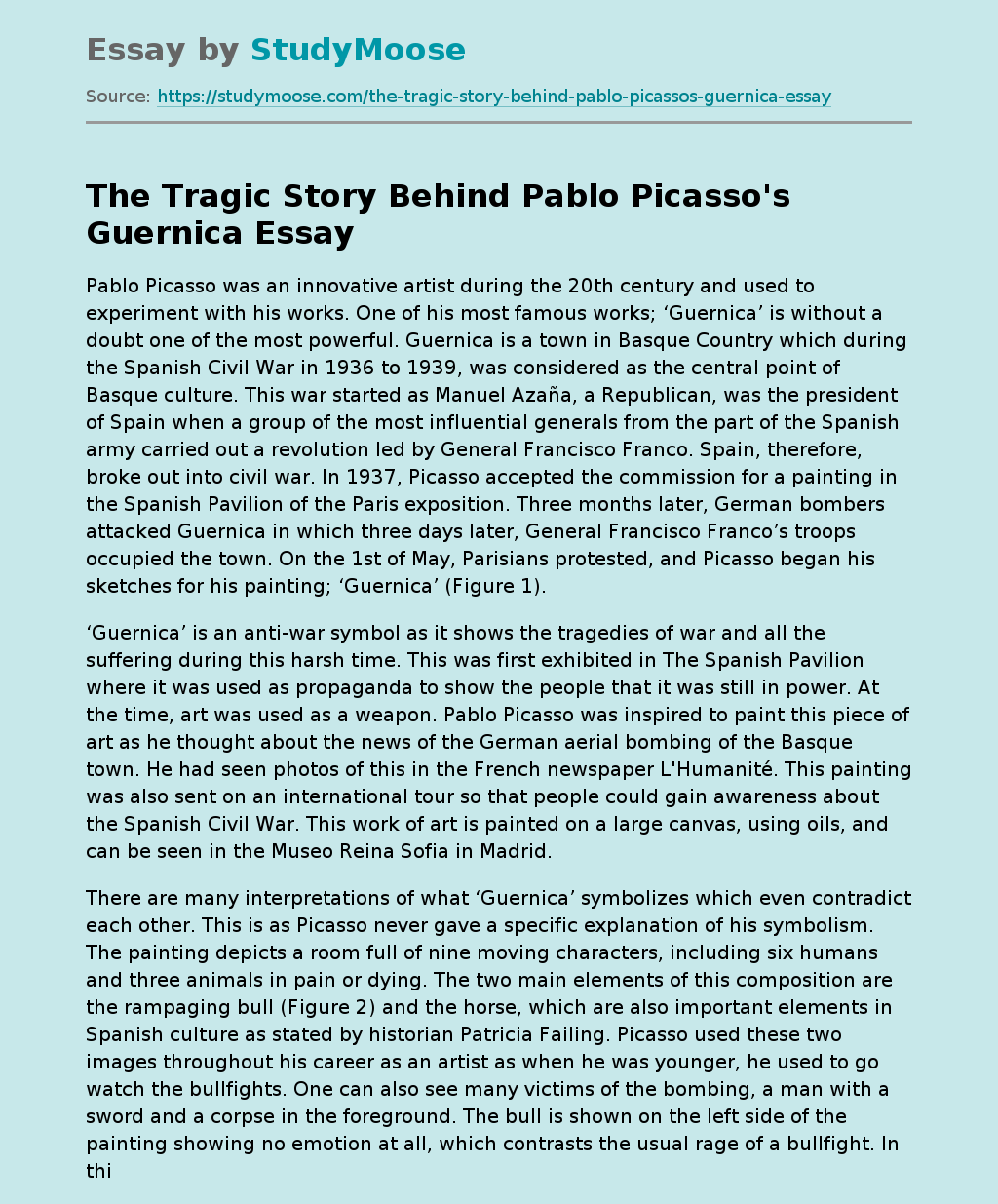