In 1787 fifty-five delegates held a constitutional convention to discuss the rights of the states.  During this convention the Three-Fifths compromise was reached; which was a compromise of the New Jersey and Virginia plans.  This compromise attempted to resolve the differences between the Northern and Southern states concerning their government. In this essay I will discuss the significance of the Three-fifths Compromise, economic reasons why the framers of the constitution avoided the question of slavery and didn’t attempt to end slavery in the constitution, and other ways slavery is mentioned in the Constitution.

Turn in your highest-quality paper
Get a qualified writer to help you with
“ The Three-Fifths Compromise ”
Get high-quality paper
NEW! AI matching with writer

Even thought many colonists were slaveholders and disliked slavery; they avoided the question of slavery in the compromise.  The Southern states heavily relied on slavery as their means to make money.  Slavery made Southern colonists the wealthiest in America. During the convention, the framers did not attempt to end slavery in the new document, because their success and survival depended on slave labor.  Slaves’ harvested their cash crops of tobacco, indigo, and rice.  The Southern states were not willing to give up their wealth power and money making labor force.

The Three-fifths Compromise was not the only discussion of slavery at the convention.  The fate of slaves was also mention in a clause called the Northwest Ordinance.  This ordinance promised that any slave who escaped to the Northwest would be returned to their owners.   Along with this ordinance was the fugitive slave clause, that resulted in the illegal capture of numerous free blacks who forced back into slavery. Another compromise stated that congress could not stop the importation of slaves before 1808 and noted that slave-holders would be taxed ten dollars per slave. (Collier, 1986).

The Three-fifths compromise greatly influenced and shaped the way the American nation was formed.  The discussion of slavery was a powerful and sensitive subject during the convention, which helped to shape the formation of the Constitution. Even thought slavery was disgusted by some of the colonists and slaveholders, it was considered a necessary evil. 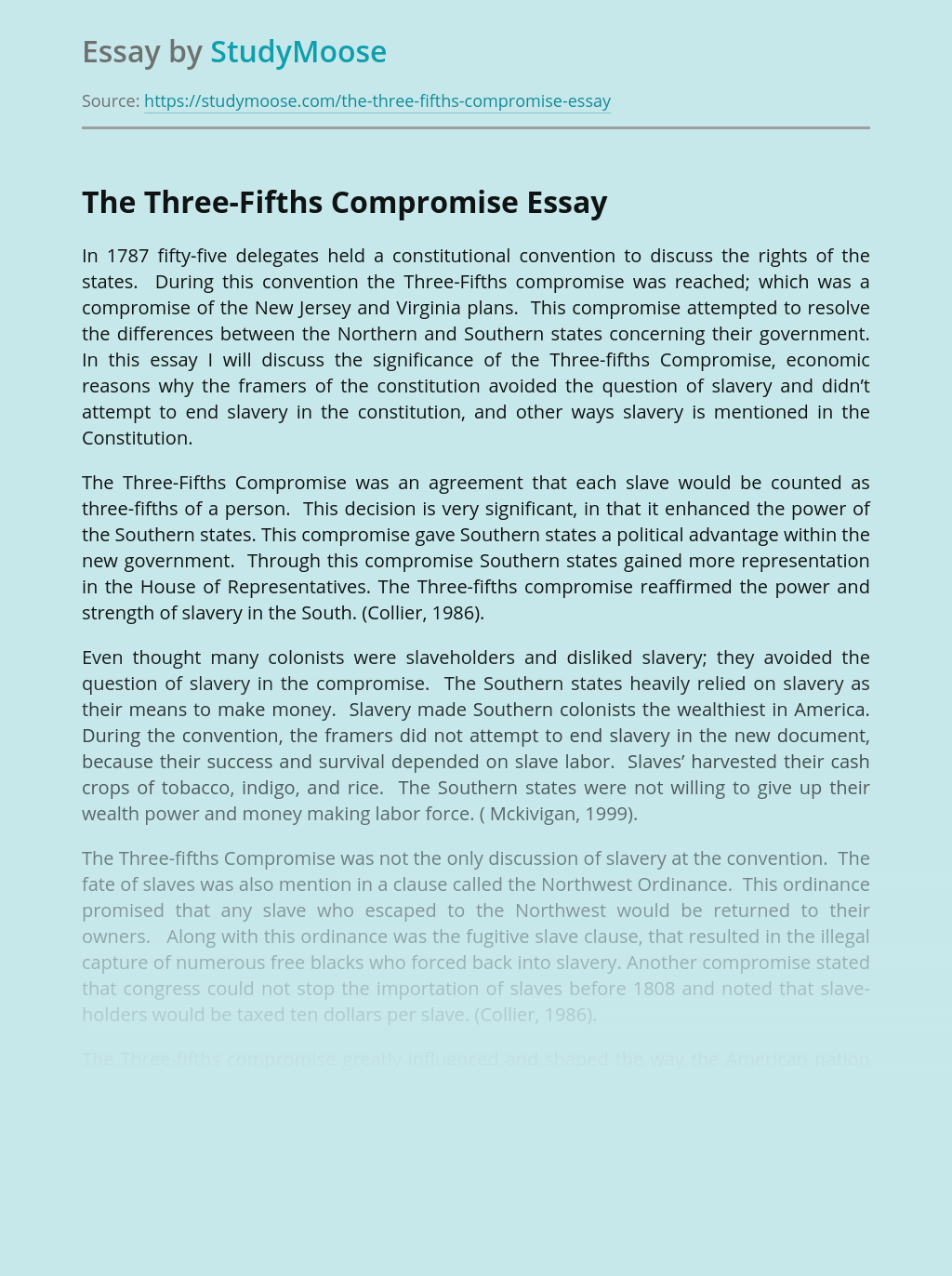 Turn in your highest-quality paper
Get a qualified writer to help you with
“ The Three-Fifths Compromise ”
Get high-quality paper
Helping students since 2015
Stay Safe, Stay Original