Why the Crittenden Compromise Was Rejected

The Crittenden Compromise was one of many attempts made in Congress and American politics to resolve the conflicts and tensions that existed between the North and South following the election of Abraham Lincoln to the presidency. During this time the issue of slavery, fugitive slave laws, and border states became prominent. America was expanding at an ever-increasing rate as settlers moved westward, both northerners and southerners, taking the issue of slavery with them.

Internal government conflicts over whether or not these new areas should be admitted to the Union as free or slave states were a major issue.

The Crittenden Compromise, in its simplest form, was proposed by Kentucky senator John J. Crittenden and consisted of 6 constitutional amendments and four congressional resolutions. Crittenden’s Compromise called for an expansion of the Missouri Compromise line, making it that any territories currently or “hereto after” acquired would be slave territory below a certain line.

The other, more major issue in his compromise dealt with the Fugitive Slave Acts and called for slave owners to be compensated if they have trouble taking back their slaves (property) from a free state, and changing the way that the government could deal with slavery in general.

While this was widely praised by many slave and border states, the Compromise was rejected by the Republicans, who followed in President Lincoln’s example.

The Republicans did not agree with the “hereto after clause” because they felt it represented a move by the South to acquire more lands in tropical areas for slavery.

While it was a promising solution in many people’s eyes, it failed ultimately because they could not agree on how far slavery should go, in terms of how far south in the United States, and at what point slavery should be stopped from spreading beyond the borders of the South as it stood.

Why the Crittenden Compromise Was Rejected. (2016, Sep 05). Retrieved from http://studymoose.com/the-crittenden-compromise-why-was-it-rejected-by-the-republicans-essay 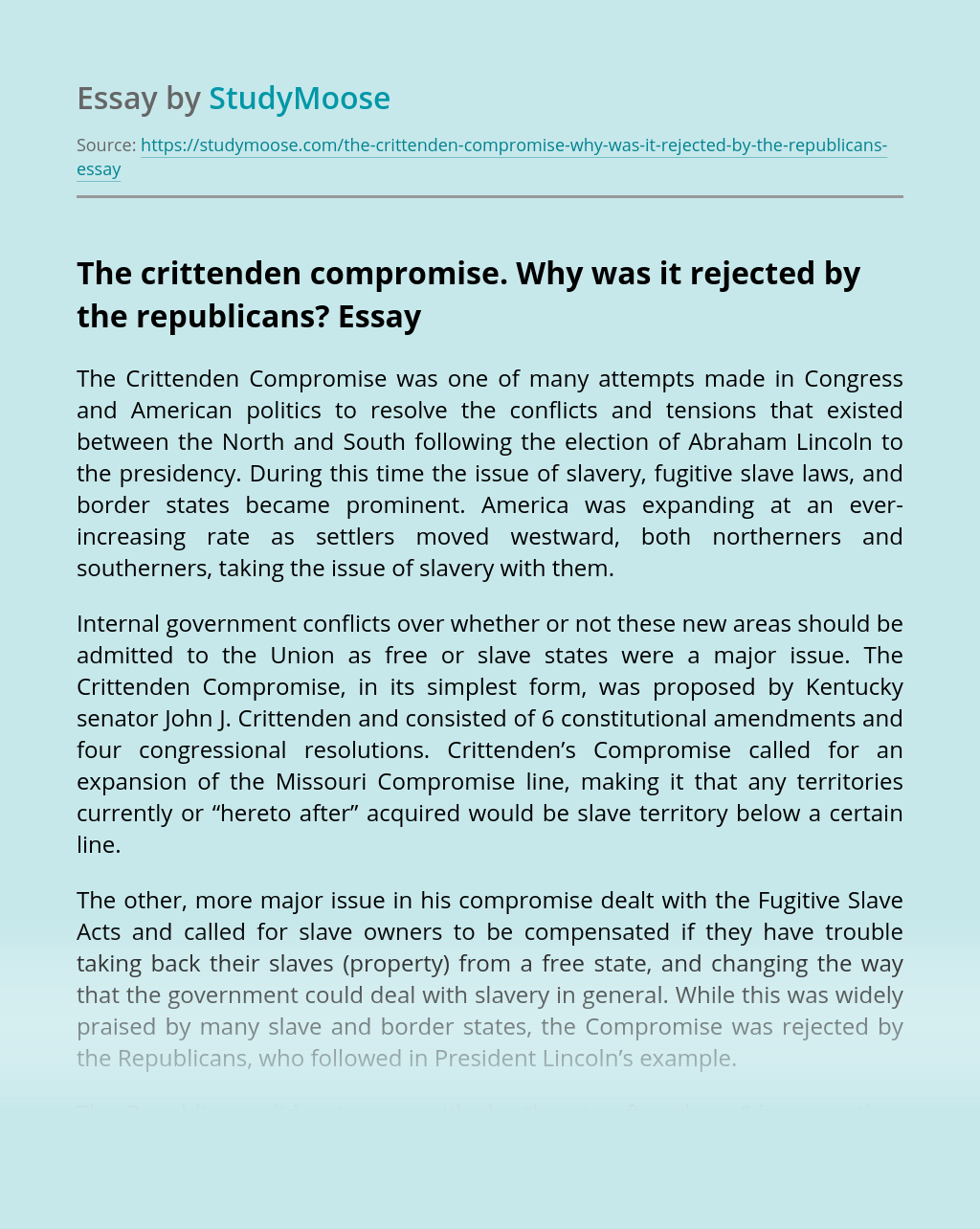 Don’t waste time
Get a verified expert to help you with Why the Crittenden Compromise Was Rejected
Hire verified expert
$35.80 for a 2-page paper
Stay Safe, Stay Original