The similarities and differences between probation and parole

There are many differences between probation and parole. There are also many different definitions of probation, one that I believe is a good one is the action of suspending the sentence of one convicted of a minor offense and granting him provisional freedom on the promise of good behavior. Parole is the release of a prisoner before is term has expired on condition of continued good behavior. The similarities between the to is the person convicted of the crime has to show good behavior in order to stay out of jail.

Don't use plagiarized sources.
Get Your Custom Essay on The similarities and differences between probation and parole Just from $13,9/Page

To compare Probation and parole is not a factor, because they are similar in a very small part.

They are different because Parole has to do with serving time in prison and so does probation, but parole if you are not on good behavior you are sent back to prison to serve the rest of your sentence and possible more time as well. In 1976 the Attorney general of Alaska abolished plea-bargaining, which has to do with probation. With out plea-bargaining there is no probation. A person just goes straight to court and they find out if they go to prison or not. Parole I believe is not a good idea because, a person is never one hundred percent rehabilitated.

I think that probation is a fine idea because a person can learn from their mistakes. If that person messes up and does not same out of trouble or stop doing illegal things, that person should be sent to prison and suffer for what he or she has done. The idea of having a probation officer assigned to a probationer is a good thing. There are many flaws in that objective though. First off the probation officer does not know what the person is doing all the time and probation officers do not check up on the probationers as much as they should because there are so many people that are on probation and not enough officers to keep up with it.

There are many restrictions on parole and regulations that need to be accomplished. When an inmate is up for parole they have to go in front of a parole board. The parole board determines if the inmate is rehabilitated and is fit for a future in society. In today’s society the state of Wisconsin was the most recent to abolish parole board release. IF an inmate was released to society they must obey many laws and regulations in order to stay out of prison. They need to get a job and contribute to society.

The ex-inmate also needs to stay out of trouble and not commit any minor or serious offenses. Both probation and parole hold a serious function in present day. There are so many people that are in prison and getting into trouble. If probation did not exist there would be even a larger number of people in these overcrowding prisons. If parole did not exist there would be a large number of the people in prison would be old and also a large amount would be juvenile offender.

There are many purposes of probation and parole. They are useful to put criminals away, deter crime, and to turn peoples lives around. When a person is on probation they learn what they did wrong and also see what could happen to them if they committed a serious offense. Parole is just the opposite, it is when a criminal already served time in prison and is trying to turn his life around. The disadvantages of a person that was released from prison, they have to find a job and a home if they do not have one already. The person has to try and live in a totally different society. In the 1980’s statistics showed that after an unspecified number of people that were released from prison on parole.

A number of those prisoners were responsible for 23 homicides, 32 rapes, 262 arsons, 681 robberies, 2,42 burglaries, 2,571 assaults, and more than 8,000 other crimes, at a cost of $304 million dollars to the victims. That is why many members of the public and others want the early release program to be stopped. I believe it is a good idea to stop parole cause they prisoners do not know anything else to do but commit crimes.

Some people believe that the most promising way to deter crime and help people out is to put them through intensive probation. That means the probation officers cannot have such a large workload to deal with. If a probation officer or parole officer has many ex offenders to work with it will not be a rehabilitation and good way to keep the offenders out of trouble. It is hard for the Parole and probation officers to keep up with their work because they cannot be at some many places at the same time. The government need to hire more people to do those jobs and have accurate rates and tell other how the ex offender is doing. Intensive probation programs do have a good record of having an effect on the ex offender, but it is not always used.

In conclusion probation and parole are good ways to keep our streets safe and help rehabilitate people. There are some similarities, but most of all there are many differences between the two. It is critical they function the right way and they may have flaws in them but what programs do not have any flaws. Our system is fine the way it is and if we did some how change it, I believe it would not work in the short run it takes time for those things to happen and it’s years it take either.

The similarities and differences between probation and parole. (2016, Jun 25). Retrieved from https://studymoose.com/the-similarities-and-differences-between-probation-and-parole-essay 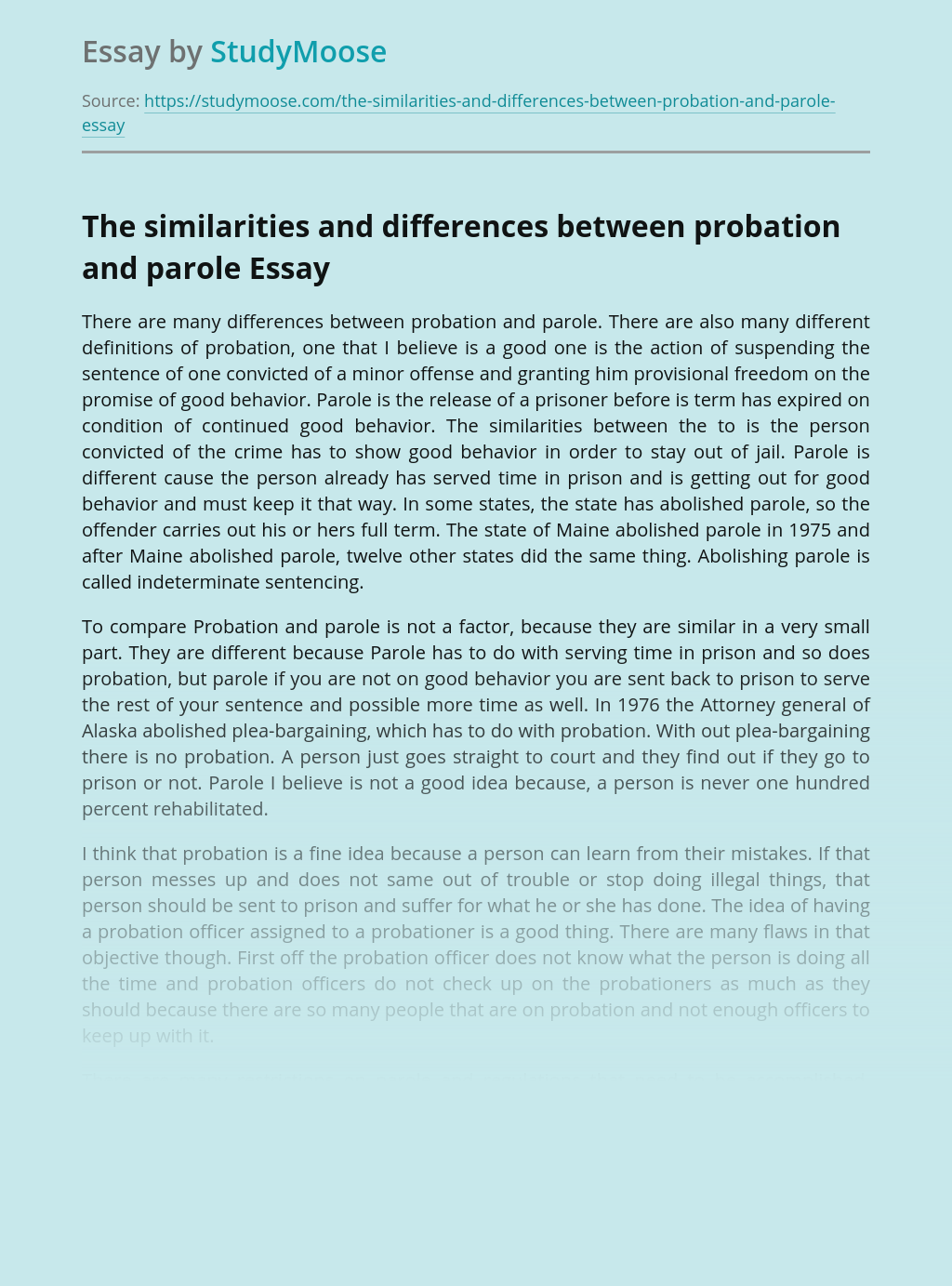 Causes and Solutions for Crime

Crime is a serious issue of many countries in the contemporary society; in particular, the crime rate gradually increases annually in some sectors worldwide. There are two main causes and one solution of crime that will be illustrated in this article. The first cause is poverty, which is seemed to be the principal cause of...

In 1980, an Illinois jury convicted John Wayne Gacy for killing 33 young boys and men. Sarcastically, after his conviction, the infamous killer, also known as “The Killer Clown” said “I should have never been convicted of anything more serious than running a cemetery without a license” (Berry-Dee, 2011). Obviously, something intrusively wrong resonated in...

View sample
Get Essay
Gang Leader for a Day

In so doing, Venkatesh revealed a complex mix of subculture (the Black Kings were a highly organised gang with a clear hierarchy, recruitment rituals, and socialisation processes) and culture – the gang were embedded in the day-to-day life of the Projects. Although their primary purpose was to make money through selling drugs (mainly crack cocaine),...

View sample
The Advantages and Disadvantages of the Uniform Crime Report

Introduction             To address the need of many entities—news media, tourism agencies, and other groups with an interest in crime in the United States for an official Crime Index figures, Uniform Crime Reports had been provided by the Federal Bureau of Investigation since July 1930. The FBI acquired this information from the different law enforcement...