The short story "The Word Love"

Mothering is nature’s way to make sure that a child is able to grow and prosper in the world. That one day that child may also experience parenting and share the bond that grows between children and their parents. The Mother, in the short story The Word Love, sympathizes with this description of a mother’s duty but is torn between the love for her daughter, and the values of her community. While young, her daughter would ask and then receive whatever nurturing she had craved, but when disciplined was needed the mercy of a loving mother seemed to be lacking.

Instead of a loved one rebuking and correcting a child who had disobeyed, a judge would come forth and dispence the sentence on the guilty. Culture, parenting, and the love between mother and daughter seem to collide when observing the mothering of the child, and retribution for wrongdoings.

Motherly love is a driving force in the maternal character’s parenting style.

The love for her daughter at a younger age shows in her involvement in keeping her daughter happy and close by. These loving feelings appear for her daughter again and again while the main character is young. While in the market place the child was craving for some momphali, a peanut that is sweet roasted. The character’s mother allows her to purchase the treat like a mother would buy a piece of candy for her child who asks for one in the checkout isle of a grocery store.

During this she says, “Yes, baby, you can have some.” Her obvious tone sends warmth to those that hear it.

These soft words are spoken by parents to their children when all that is desired is the sight of their child being totally content. Her commitment to her child by teaching her how to write is another example of the maternal love for the main character. The stepping stones of education come from the household. The child was taught how to write by her mother, influencing her career choice to become an English major in college. The mother’s influence on the child’s education had been key even through high-school. A face full of a mother’s pride, and surrounded by a beautiful sari, sits in the front row of her only child’s high-school graduation. Unable to hide expression on her face she had beamed with pride giving her a red glow like a dahlia.

Loving as she may be, the main character’s mother was a very complex woman. In many of the worlds cultures women play a vital role in the home while fathers are usually head of the household. The character’s father had passed on, when she was only two, and the mother became solely responsible for the child’s needs. This obviously puts a strain on her to perform to a higher standard than the average mother, making her put pressure on the main character to become more than a usual daughter. The mother is depicted as having no psychological middle ground. The mother was always very happy and willing to see her child content with what she had, or she would become very overbearing and her punishments extremely harsh.

These harsh punishments are shown when the daughter disobeys her mother’s wishes when going to the movies with friends. It is also seen when she excommunicated her daughter from her life, family, and existence. So harsh, was she, that it seems that she loses grip on the lesson trying to be taught by her punishment, and focuses more that her child is suffering from an extremely large amount of guilt for the way she has wronged her mother. This occurred when the daughter was locked out of her house with all her belongings on the doorstep. The punishments focus mainly on what the daughter had done to her mother’s reputation, rather than against their culture or religion.

The mother’s values reflect the stereotypical views of her society about a woman and parent. For example, while a young girl the main character was brought up with tales of those that disobeyed their parents, or were unruly so that the parent became unable to control the child. Even now parents tell fables, short stories, and fairy tales in order to teach their children right and wrong, or good and evil. One such story told by the mother was that of a young girl who had killed herself because of her unruly ways, and inability to listen to the warnings of others much more knowing than she. A second moral heeds parents to keep control over their children, lest they disgrace you, your name, and cause you grief. Her mother’s actions mimicked the moral of the story when the child disobeyed her mother’s orders.

The main began seeing a man whom she started a relationship with. Knowing the tradition, and that her mother might have been in the process of arranging a marriage for her, she decided to disobey her mother’s wishes and move in with this man. Willingly disobeying her mother’s wishes she hides from the truth and tells he mother lies about how she has been living. Like any mother who catches her child lying she punishes her daughter. Although the punishment didn’t seem to fit the crime she made her daughter realize a life lesson. That for her disobedience there would be severe repercussions, and there were. As a strong willed mother would do with a bad seed, she decided to cut the dead limb off of the family tree. There are lessons in life, which parents realize a child must learn on their own, and live with. These situations show how a mother takes a daughter, and makes a woman.

The character’s mother had helped the child grow and eventually take care of herself. Both shared a close connection that followed the two across oceans and kept the two close even though the distance became an obstacle. If the tough punishment for the wrongs that the child had done, was accepted, there was a soft and loving mother willing to care for her child and tend to her needs. Even with the extremes of the mother’s techniques, in The Word Love, mothering similarities can be seen in other parents across the world.

All references taken from “Wing to Wing, Oar to Oar- readings on courting and marrying” By Amy and Leon KassUniversity of Notre Dame Press, Notre Dame In 46556

The short story "The Word Love". (2016, Jul 20). Retrieved from http://studymoose.com/the-short-story-the-word-love-essay 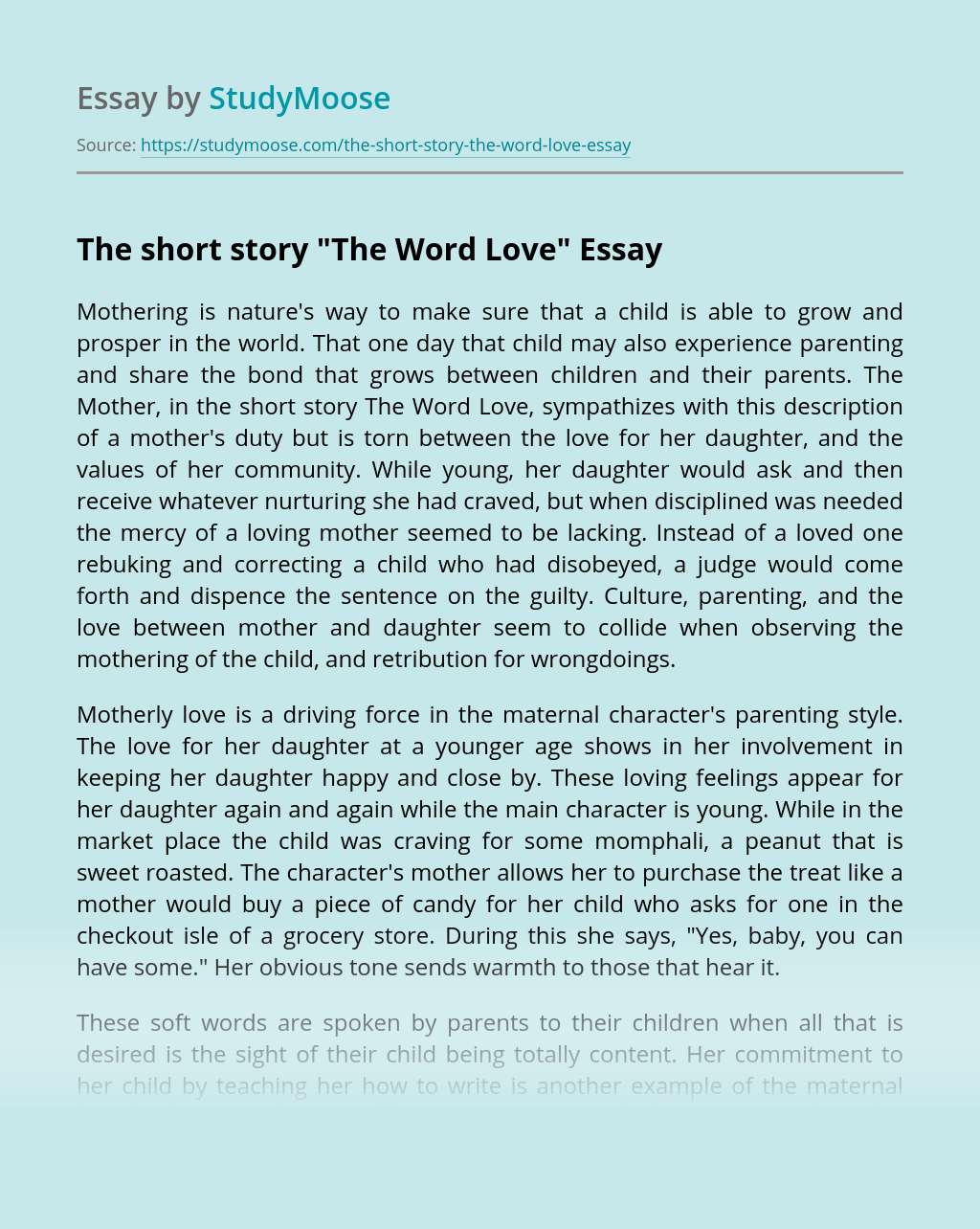 Don’t waste time
Get a verified expert to help you with The short story “The Word Love”
Hire verified expert
$35.80 for a 2-page paper
Stay Safe, Stay Original