“The Resplendent Quetzal”, by Margaret Atwood, is the story of Sarah and Edward, a disparaging husband and wife, who lost their child at birth and consequently lost their love for one another. This story focuses on the individual way that they dealt with the same tragedy and how it led them to become who they are today. Atwood uses symbolism and descriptive character analysis to show how far the degeneration of their relationship has gone. They both continue with their superficial relationship, unable to face the emotional scars of their past because they are too afraid of the reparations it will generate for the future.

Don’t waste time
Get a verified expert to help you with Margaret Atwoods’ short story “The Resplendent Quetzal”
Hire verified expert
$35.80 for a 2-page paper

Sarah is self-described as “comely” (271). She views everything Edward does with disdain and contempt, a view that stems from the blame she places on him for their baby’s death. His thrifty spending exasperates her: they travel via bus, stay in cheap hotels and instead of going to a “perfectly nice [restaurant] in the village where they were staying” (HASF 275) he insists they go to a “seedy, linoleum-tiled hutch” (275).

Edward bores her with his so-called obsessions; he never sticks with them (except the birds). She too “had once herself been one of his obsessions” (271). Sarah views Edward as a “total idiot” (272), given the fact that he always appears to fall for her bird trick, which in turn insults, yet even more so, confuses Edward. “For someone [Sarah] so devious, she was often incredibly stupid” (272). Sarah represses her festering emotions by being curt and contemptuous, creating a starched, barely functional relationship.

Sarah’s continuous belittlement of Edward drives him to be continuously occupied. Subsequently he appears to be an on the go, eager to learn man, busying himself with his job as a Grade 6 teacher and his ever-changing hobbies. He cannot face the emotional pain of the loss of the baby either, but more so, he does not know how to deal with Sarah’s emotional nastiness. Vulnerable and weak, Edward succumbs to Sarah’s degrading behaviour for he cannot accept or understand what their relationship has become.

The location of the story symbolizes the state of their marriage. The story is set at the site of ancient Mayan ruins somewhere in Mexico, now overrun with big-hatted American tourists and gold-toothed Mexican guides. The main attraction of the site is an ancient Mayan sacrificial well. It is large and mud-brown with “a few clumps of reeds” growing in the murky water. Sarah had envisioned something more like a wishing well, not this primitive, swamp-like hole in the ground. Sarah’s expectations of what the well would look like symbolize what she thinks her and Edwards relationship should have turned out to be like. Instead, she is just disappointed. The Mayan ruins symbolize the remains of their marriage. The foundation and its structures have been destroyed leaving nothing but a dysfunctional pile of rubble.

In an attempt to escape from the truth of their marriage, the Edward and Sarah go on vacation. To be on vacation is to go somewhere out of the ordinary and to take a break from ones everyday life. This is what Sarah and Edward hoped to do by going to Mexico, to get away from the unhappy reality of their marriage. They tried to escape the real world by entering a superficial one. The westernization of the village they are staying in and the commercialization of the Mayan ruins represent their superficial world. The “authentic” Mexican diner where they ate had a radio shaped like Fred Flintstone playing American pop songs, a crèche with an eclectic collection of holy figurines and a TV playing a dubbed version of “The Cisco Kid”.

The Mayan site was swarming with foreign tourists with their generic guidebooks, straw hats and large “tasteless” (276) handbags. Both places covered up the natural, real world for a supposed more appealing and beneficial one. The real world is seen in the ancient well, the ruined pyramids, and the fleas whose bites “swell-up” (271) on Edwards legs. Reality is less appealing but will continue to exist whether it is acknowledged or not.

As Sarah sits alone by the well, she remembers the early days of her and Edward’s relationship. He had shared with her his love of birds, and she realizes that back then that she actually had been “touched and interested” (271) when he confided this in her. When she had gotten pregnant “she’d taken meticulous care of herself” (279), fearing that her baby would be born with a deformity or worse. Instead, it had been a normal child, its death a freak accident. “There was…no one to blame, except, obscurely Edward” (279). Sarah’s reaction to their baby’s death was nonchalant: “‘Well, that’s that,’ she had said in the hospital afterwards” (279). Edward had been the one to cry, not her. She simply bottled up her pain and sadness, hiding it from Edward and herself. Thus, began the slow disintegration of their relationship.

To Edward it now seemed Sarah was always waiting or looking for something, maybe her “lost” (279) child. After the baby’s death, Edward seemed to lose interest in her. Sarah saw him emotionally desert her, leaving her “alone with the corpse” (279). Edward had at first tried to be emotionally supportive of Sarah. He pushed for another child, thinking maybe it would erase the past and bring back the happiness they had both once shared. Instead, she only distanced herself from him. Sarah could not understand how Edward could ask her for another baby, “it was too much for anyone to expect of her” (279); this fuelled her growing distaste for him. Edward now clings to the false hope of another child and another chance at happiness; he does not want to admit failure.

Neither Sarah nor Edward wishes to be involved with each other, they both know that their relationship is not a relationship anymore; it is not even a convenience. The problem is that neither wishes to take the route of separation because they both know the pain it will trigger. This causes them only to fantasize about life without the other. Sarah wishes Edward dead; it is not that she wants him to die, she just cannot “imagine any other way for him to disappear” (274). Edward fantasizes himself as King Kong, “picking Sarah up and hurling her over the edge…into the sacrificial well” (273). His thoughts then turn to changing Sarah’s appearance; even in his fantasy, she is not fit for sacrifice.

Edward’s fantasy parallels Sarah throwing of the stolen, plaster baby Jesus into the well. The sacrificial nature of it is Sarah’s attempt to throw away the bane of her existence–the death of her baby. With it, she throws down all hope and happiness, leaving her with nothing but pain and grief. Sarah is forced to momentarily face reality: her baby is gone and is not coming back. It is a poignant moment of self-truth for her. She breaks down and starts crying, unable to deal with the repressed emotions that are welling up inside almost breaking through the surface. However, as Edward approaches Sarah regains her poise, the emotions sent to retreat into the depths of her being. For reasons unbeknown, she cannot show the man, whom she swore to share a life with, the true extent of her grief.

Ironically, Edward wishes for nothing but for Sarah to let down her wall, yet when he sees her crying he does not know how to react. “‘This isn’t like you,’ Edward said pleading, as if that was a final argument that would snap her out of it and bring back the old, calm Sarah” (280). He lacks the courage to confront her emotions, which would in turn cause him to confront his own. Sarah’s unhappiness stems from the loss of the baby. Edwards’ unhappiness stems from Sarah’s contempt of him.

“The Resplendent Quetzal” addresses the different reactions of people to the same initial crisis and the effect it has on their relationship. Edward and Sarah both faced the same trauma, but instead of coming together and jointly overcoming the problem, they use it as a weapon against each other. Their relationship engages only feelings of hate and frustration for one another. The story ends without a conclusion. Sarah recovers from her moment of distress and “[smoothes] her skirt” (280), resuming her standard functional relationship with Edward. She then asks Edward if he had found his bird. Sarah had said that the one bird she wanted to see on their trip was the Resplendent Quetzal. It is obvious that neither of them will find their “bird” on this trip. Their bird is the happiness of their past that they sacrificed by repressing their problems and fears. 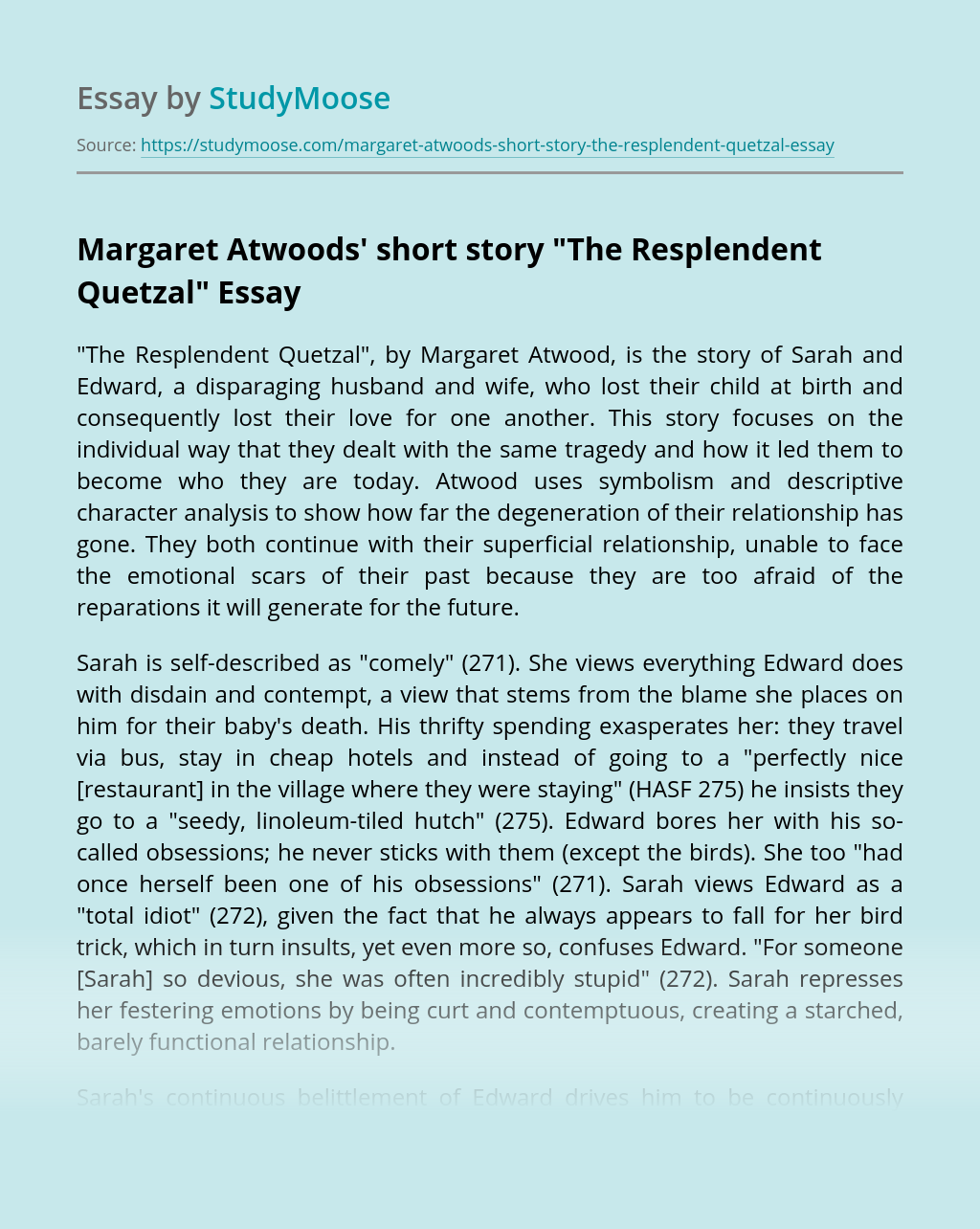