Hagar’s first key relationship is with her father, Jason Currie. This relationship has its basis in mutual respect.

Don't use plagiarized sources. Get your custom essay on
“ Relationships in Margaret Laurence’s “The Stone Angel” ”
Get custom paper
NEW! smart matching with writer

Hagar has tremendous respect for her father as a child; she admires his ability to make his own life as a successful storeowner by rising above his initial state of poverty and going from nothing to something. She admires this ability because it shows a sense of perseverance and determination that she herself values. Additionally, it is crucial to her respect that he achieves his standing in life through his strong-will; he made it in life by being strong and forceful rather than by putting his emphasis on emotions.

This strong-willed personality and unwillingness to show a form of weakness through emotions – forms of pride – become cornerstones of Hagar’s own character. Indeed, the key factor in the relationship between Hagar and her father is that they have a similar personality. Both insist on proving their strength and pride, stopping either of them from being able to connect to the other on an emotional level.

This pride is evident in her father’s punishment of her when she tells a customer that there are bugs in his store as a child; he clearly takes great pride in his work.

Hagar too is proud, to the point of resisting her need to cry when her father hits her. She gains his resolve to put forth the image of strength at all times and to mask her vulnerability with pride. This form of strength leads Jason to carry respect for Hagar as well. She wants to please him, yet this similarity in their personalities is the very thing that destroys their relationship. They are constantly at odds with one another because she has in many ways turned herself into him, and the character trait of stubbornness is one that can be particularly hindering when neither side is willing to give in to the other. He wishes to control Hagar’s life, and as both are stubborn and independent, he cannot possibly succeed and ultimately does not. His attempts to control her life by determining whom she will date only strengthen Hagar’s need to rebel and to prove herself, which leads to the final crack in their relationship: her choice to marry Bram – the person her father least approves of.

This act of rebellion shows her need to prove her independence to her father, and her reaction to his insistence that she will not marry Bram only strengthens her belief that she must do so. When she does leave with him, the relationship between father and daughter effectively ends, as neither side contacts the other. When Jason dies, he does not even leave the store to her. Despite their lack of communication, Hagar still respects her father. This respect is evident in that she is deeply offended when Bram urinates on the steps to her father’s store. It is perhaps most apparent in her narration; years after losing contact with him, she still holds him in esteem and sees him as a model for her own life. Nevertheless, the relationship is a failure because neither Jason nor Hagar is willing to allow his emotions to take precedence over his pride. Clearly, their similarities are such that their relationship is unable to succeed unless one is willing to give in to the other – an art that neither Hagar nor Jason is particularly proficient in.

After Hagar leaves her childhood behind she goes to finishing school and her return to Manawaka allows her to meet Brampton Shipley. Her impersonal, bickering and sexual relationship with Bram, although ultimately a failure, is a key one in her life. At first, Hagar is attracted to Bram’s physical appearance as well as his personality – which sharply contrasts her own. Hagar is also initially attracted to his lack of expression of true emotion. Bram is tall, dark and handsome, but also reveals a gruff and wild personality, which allows him to do and say what he wants without being mindful how society judges him. However, Hagar is quite mindful of social status, which makes her more conservative and more polite than Bram. Although these opposing personalities ultimately attract them to each other, they become the main part of the wedge that drives them apart. Another part of this wedge between Hagar and Bram is Hagar’s refusal to open up to him and display her love of him or even of their sex life.

Some of Hagar’s refusal to open up stems from her fear of being hurt if she does, and some of it stems from the circumstances under which she and Bram were married. Like Hagar, her father was also a socially conscience man and he refused to let his daughter marry a common farmer. Part of Hagar agreed to marry Bram simply to spite her father. All of these circumstances lead to a change in Hagar’s relationship with Bram. Hagar grows tired of the uncouth family dinners, of watching Bram blow his nose with his fingers, and of watching him subject their children to the same wild manner.

When their opposing personalities stop being attractive to one another and it becomes clear that it is an emotionless and unhappy relationship, she takes her son John and leaves him. He does not even try to stop her. Such an impersonal parting indicates that the relationship ended in failure and Hagar is ultimately responsible for this failure. She is the one that refuses to share emotion with him, she is the one who is overly critical of him, and she is the one who leaves him. Bram’s only responsibility in the failure of their relationship is that he does not change and eventually gives up.

Hagar’s s one-sided relationship with John is the only one in which she shows love. Hagar unquestionably loves John, and offers herself emotionally to him alone. She pours everything into John, leaving little love for anyone else in her life. John does not appreciate his mother’s love as much as he perhaps should, and he is frustrated by her nagging more than he is appreciative of her love. Despite this lack of appreciation, Hagar continues to direct all of her energy into raising John. She is quite controlling, and attempts to run every part of his life – a remnant of her own relationship with her father. Hagar’s constant badgering and nagging drive John away from her as her father’s own domineering nature drove her away. Although at first John appreciates her love, the relationship changes as he wishes to grow independent of her and begins to resent her. She still cannot let go – trying to control his relationship with Arlene to no avail.

The ultimate fate of this relationship is a failure. In spite of his mother, John goes drinking and takes up a dare to cross an old train bridge in his truck. An unexpected freight train crashed into his truck and he dies shortly after with his mother by his side in the hospital. John’s death marks the abrupt end of their relationship; nothing can be done on Hagar’s part to reconcile with him. John’s rejection of his mother’s love changes her more than he knows. Since she has put everything into her love of him and he has died a vain death in spite of her, Hagar becomes the stone angel herself – emotionally blind and unfeeling, and unwilling to subject herself to the pain that love brings again. The blame for the failure of this relationship can be placed on both parties: Hagar for placing unreasonably high expectations on John and overly controlling him, and John for rejecting that love and betraying the care she has placed in him in order to escape her love and be an individual.

When he tries to impress her by cleaning the house, she criticizes him rather than appreciating him as she might have if it were John. When he prepares to go off to war, Hagar misses another key moment to connect with Marvin. She might not see him again and wants to warn him, to comfort him and to express her feelings toward him, but she cannot; she is afraid to reveal her emotions. He wishes to express his feelings, but is also unable to do so because of his timidity. Indeed, the path their relationship takes is determined as much, if not more, by personalities than it is by circumstances. Hagar’s personality is such that she takes great pride in strength and resourcefulness – qualities she finds Marvin to lack. Her inability to express herself emotionally is both a key part of her personality and the driving force behind her many wasted opportunities with Marvin – who needs the very level of acceptance from Hagar that she cannot provide.

Despite this failure in the relationship early on, however, Hagar’s epiphany before dying changes the course of it and determines its ultimate success or failure. Realizing that she has never simply rejoiced and accepted the love she has been surrounded with, she gives Marvin the acceptance he has always needed by telling him that he has been a better son to her than John has. The early failure of their relationship can be attributed exclusively to Hagar; she has the wrong expectations of him and sinks so much love into her ultimately failed relationship with John that she neglects Marvin. In the end though, Hagar is also responsible for the relative success or at least redemption of their relationship. Her choice to make their last moments together worthwhile rather than another wasted opportunity make her relationship with Marvin the most ultimately successful one in her life.

In the end, Hagar’s key relationships vary greatly; some are defined by respect and others are defined by a lack of emotion of any kind. Others still find their basis in too much or too little love. Ultimately, Hagar’s achievement of self-realization before her death leads her to redeem at least one of the key relationships in her life – redeeming herself in the process. 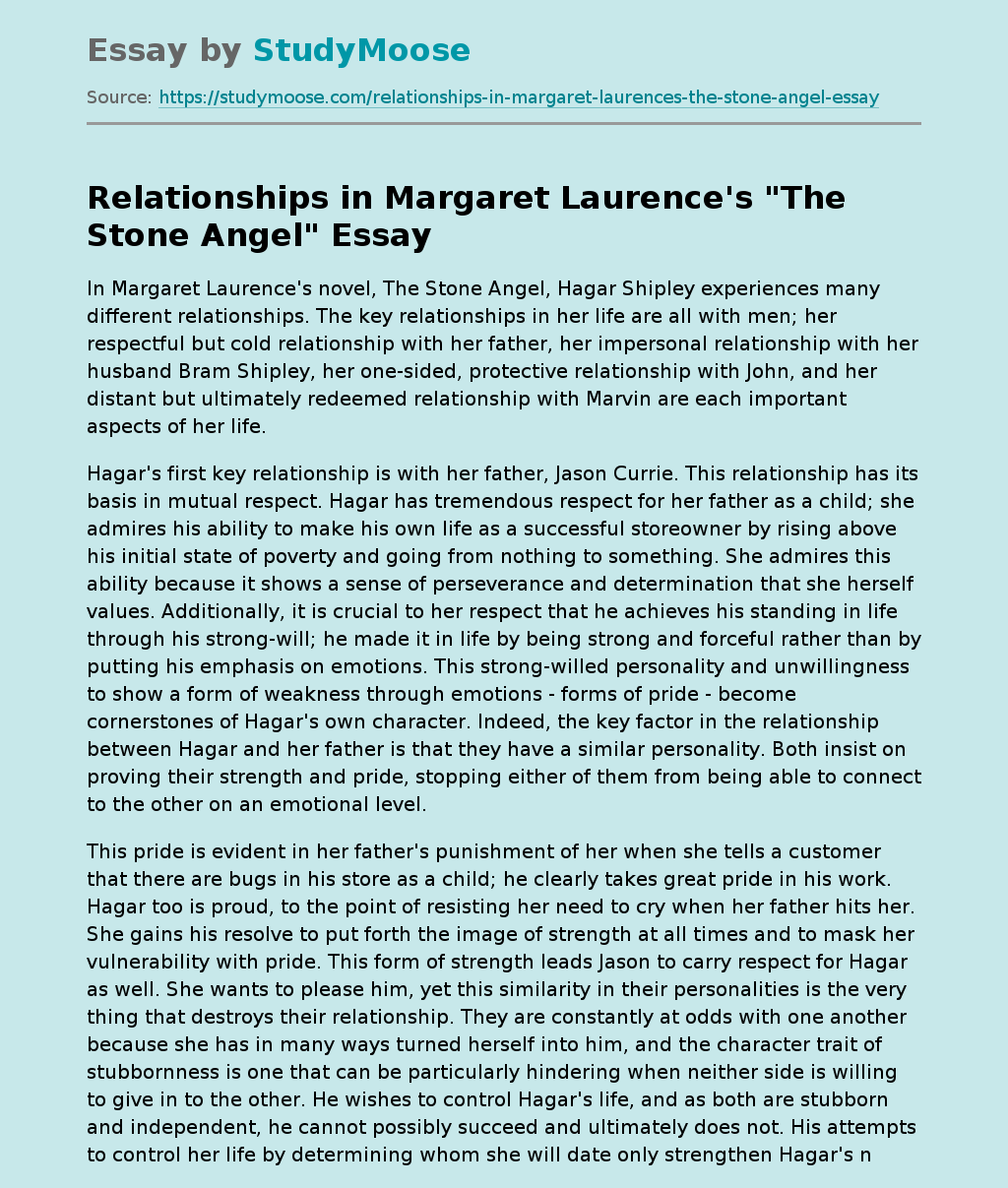