The turning of the 19th century instilled a desire in all women to be free and liberated from their husbands. They desired freedom, liberation and happiness. Such characteristics were portrayed throughout the short stories written by Kate Chopin. For the majority of Kate Chopin’s life, she was brought up without a male figure and was constantly surrounded by females (Toth, 1999). Kate Chopin was a woman whose feminist viewpoints were far ahead of her times, which of course garnered her more than her share of criticism.

Turn in your highest-quality paper
Get a qualified writer to help you with
“ Short Story Analysis ”
Get high-quality paper
NEW! AI matching with writers

In a time when women were expected to behave “properly” and sexual desire was considered to be something only experienced by men, Chopin spoke with exceptional openness about human sexuality (Skaggs, 1985).

“She criticized society for its extreme close-mindedness in a time when righteousness was considered to be an attribute, and she helped to generate more enlightened attitudes among both the women and men of her time.”(Toth, 1999) The reason for such themes to be brought up in her works of literature is because she grew up in a female dominated environment where she was not a stereotypical product of her times and where she did not conform to the societal pressure of traditional female roles in a marriage.

Various stories written by Kate Chopin have the recurring theme of freedom and a New Woman. The themes represented in the short story, “Regret” can also be contributed to this theme. Throughout the short story, Kate Chopin portrays to the audience a theme that demonstrates the negative correlation between marriage, children and freedom.

Kate Chopin’s story, “Regret,” is about an unmarried, middle-aged woman who is suddenly given the responsibility of caring for a neighbor’s small children. In this short story, the author speaks of a protagonist who goes through her entire life never depending on men and enjoying her independence and liberation (Chopin, “Regret” 259). However, the author takes a different perspective of the situation when she creates a moment of regret for the protagonist. She later goes on to regret her decision to live independently and never starting a family.

Another short story written by Kate Chopin, which demonstrates this theme, is “The Story of an Hour”. According to Toth, marriage was an oppressive
institution to Chopin; she had been a victim of it herself. Being a victim of marriage, Kate Chopin’s “The Story of an Hour,” is an expression of her beliefs that, marriage is an institution that oppresses, represses, and is a source of discontent among human beings, more specifically females. Throughout the story the author demonstrates a recurring theme of liberation and independence from the female protagonists.

In this particular situation, the protagonist is given a sense of freedom and independence from when she learns that her husband died in a tragic accident. For example, the protagonist states repeatedly, “Free! Body and soul free!”, when she comes to terms with her freedom (Chopin, “The Story of an Hour” 267). Towards the beginning of the story the author makes it clear that the main character was not very accepting of this newfound freedom but later she becomes accepting of her liberation from the traditional marital roles. She goes on to enjoy life without the presence of man interfering.

Another short story written by Kate Chopin, which demonstrates this theme, is “The Storm”. Throughout the short story the author portrays actions that demonstrate a different approach to freedom and liberation from one’s marriage. A recurring theme, which is presented in this short story, is that adultery instills a sense of freedom in the protagonist. “The contact of her warm palpitating body when he had unthinkingly drawn her into his arms, had aroused all the old-time infatuation and desire for her flesh.” (Chopin, “The Storm” 926).

For her the sexual relationship that she is developing in her affair is liberating and is what is giving her the freedom from her marriage (Chopin, “The Storm” 926). For the main character, the adulterous sex that she is having is what is giving her the sense of liberation. By engaging herself in a sexual affair with someone other than her husband relieves the protagonist of the sense that she is confined to the constraints of her husband and of the pressure provided by the society to attain her to the traditional marital roles. One could argue that “The Storm” may be interpreted as an affirmation of feminine sexuality and passion as well as a condemnation of its repression by the constraints of society (Rocks, 1984).

Another short story written by Kate Chopin, which demonstrates this theme, is “A Respectable Woman”. Throughout the story the author displays a recurring theme that the protagonist has the desire to break free from her marital hold and commence a relationship with a man she is drawn to. Mrs. Baroda is enticed early in the story with the prospect of a change from a quieter, more ordinary life (Chopin, “A Respectable Woman” 263).

The main character does not instantly recognize what she really wants and eventually struggles with the self-imposed limitations of her identity as a respectable woman. In this situation, the author depicts a future point in time where the protagonist hints that she will get her independence the next time her husband’s friend arrives. She believes that if this situation presents itself again that she will not be able to maintain the title of a respectable woman and that she will commence an adulterous relationship with her husband’s friend. The author demonstrates that the main character believes that this polygamous affair will provide her with the freedom and happiness she is looking for (Rocks, 1984).

Based on various writings from the author, Kate Chopin, a recurring theme is present is a majority of her works. The author demonstrates different scenarios, which all depict the desire for newfound freedom and liberation from women who are constrained and confined to their traditional marital roles (Skaggs, 2985). Kate Chopin gave readers a woman’s view of how repressive and confining marriage can be for a woman, spiritually, emotionally and sexually (Rocks, 1984). “The male dominated world, from which existed during this time period, was simply not ready for such an honest exploration of female independence, a frank cataloguing of a woman’s desires and her search for fulfillment outside of the institution of marriage and its associated traditional female roles” (Toth, 2002). The tragedy of this author’s existence is that during her life the literary world did not recognize such exceptional skill. 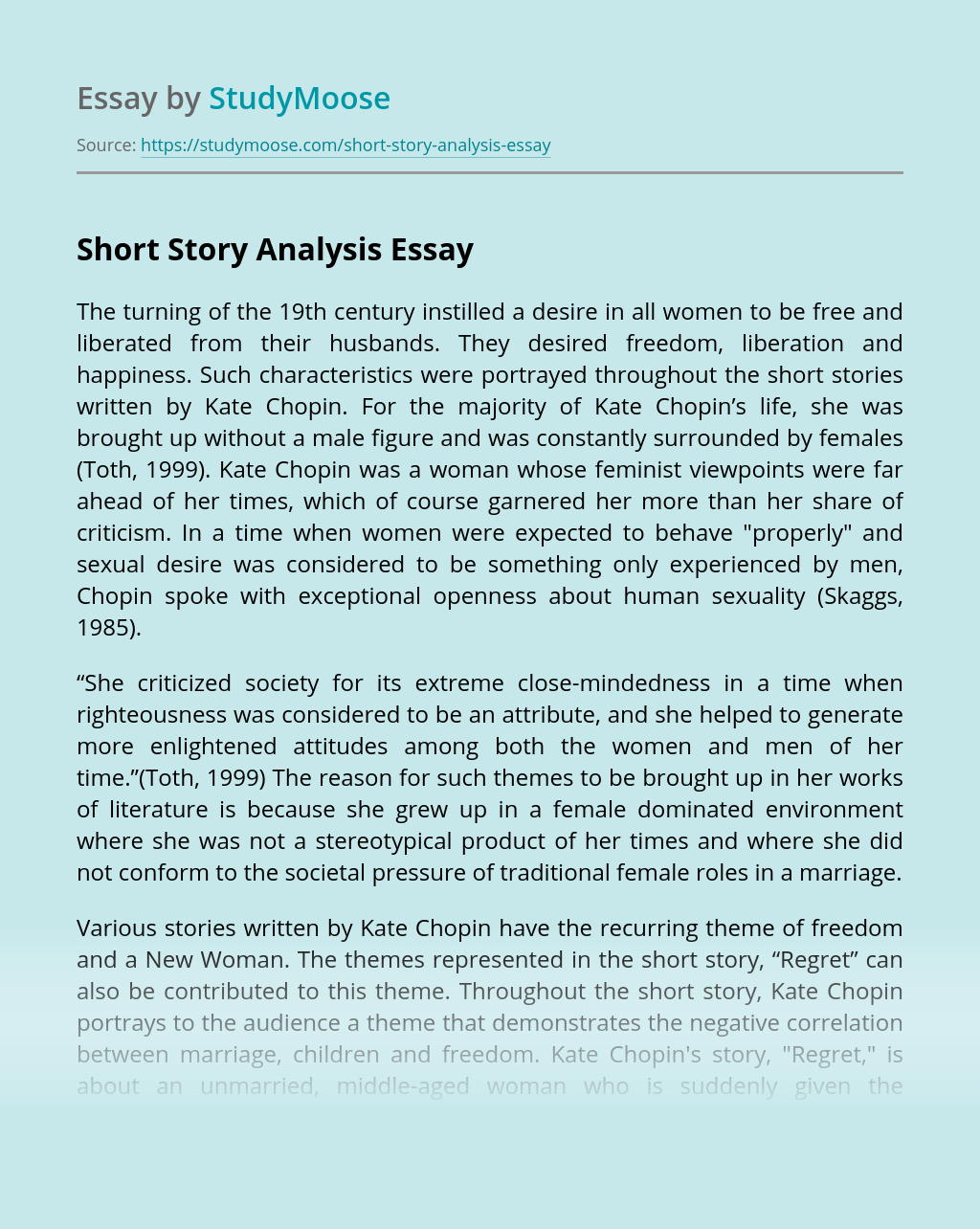 Turn in your highest-quality paper
Get a qualified writer to help you with
“ Short Story Analysis ”
Get high-quality paper
Helping students since 2015
Stay Safe, Stay Original