Short Story A Good Man is Hard To Find

In the short story A Good Man Is Hard to Find by Flannery O’Conner, the reader is taken on a journey and tags along with a self-centered family as they explore the sights of the rural south while en route to their destination, a family vacation in Florida.

As they travel the dusty road, O’Connor (2012) takes them from heaven, “all at once, they would be on a hill, looking down over the blue tops of trees for miles around,” (p.

Don't use plagiarized sources. Get your custom essay on
“ Short Story A Good Man is Hard To Find ”
Get custom paper
NEW! smart matching with writer

139) and spirals them down to hell “then the next minute, they would be in a red depression with the dust coated trees looking down on them,” (p. 139) where they meet their sudden and unexpected demise. Through it all, O’Connor spins a violent, dark and dismal tale, utilizing symbolism, allusions, irony and psychological aspects to effectively convey her theme of good versus evil, and reminds us that good does not always win.

O’Connor (2012) starts us in an unnamed city, with a family of six as they discuss their upcoming vacation to Florida.

The husband, Bailey, is succinct and short with his words. His wife and mother, both remain unnamed in the story but have quite contrasting personalities. Bailey’s mother, the grandmother, is self-centered and often manipulative. His wife, the children’s mother, is quiet and meek as she cares for her youngest child, the baby.

His 2 older children, John Wesley and June Star, are outspoken and disrespectful, and their rude behavior goes unpunished. They travel the back roads of Georgia together as the grandmother tells tales of the past and points out uninteresting sights, which fall on the deaf ears of her family.

The family stops for lunch at a roadside diner, and the reader gets a further glimpse into their everyday interaction, and for a moment, things actually seem hopeful for the dysfunctional family.

After their meal, the family continues on to their destination, and the grandmother and children manipulate Baily into taking a detour to visit an old, mysterious estate that the grandmother once visited in her younger years. A sudden and embarrassing thought of the grandmother leads to a car accident where miraculously, nobody sustains any serious injury. A moment of hope in rescue turns dismal as their rescuer turns out to an escaped killer, the Misfit, who eventually kills the family. The grandmother, who in more ways than one is responsible for the family’s untimely end, has a moment of grace in her last moment and dies with a smile on her face (p. 134-146).

O’Connor’s story is filled with symbolism and allusion, in order to further convey her dark theme of death and ideas surrounding it. An example of such symbolism is when the family is passing the town of Toombsboro. O’Connor (2012) writes “outside of Toombsboro she woke up and recalled an old plantation that she had visited in this neighborhood once when she was a young lady” (p. 138).

The name of the town, Toombsboro plays on the word tomb, which represents death. This alludes to the reader that death may be in the family’s future. O’Connor continues with the symbolism after the family has crashed, and their hope for rescue comes in the form of a hearse. The family sees a car slowly driving towards them, lumbering along the twists and turns of the road they had just traveled. As it appears in front of them, O’Connor (2012) writes “it was a big black battered hearse-like automobile” (p.140). Again, the image of a hearse, which is used to transport the dead, brings the idea of death to the mind of the reader, and further alludes to the death that the family is about to encounter.

O’Connor (2012) furthers her death allusions and symbolism when she writes “the Misfit pointed the toe of his shoe into the ground and made a little hole and then covered it up again” (p. 142). The Misfit in this case, is digging a hole and then covering it back up, symbolizing the digging of a grave, and then filling the grave back in. O’Connor’s use of symbols of death advance her theme and add to the dark tone of the story.

O’Connor also uses a number of psychological aspects to further relate her characters to her readers. As O’Connor starts the story, all members of the family appear in one way or another to be self-centered, which relates to the psychoanalysis term of the “Id,” which are the unconscious desires of the character and the gratification of those desires. In one passage, the grandmother speaks to the children of an old southern gentleman she once knew, Mr. Teagarden. O’Connor (2012) writes “she would have done well to marry Mr. Teagarden because he… had bought Coca-Cola stock when it first came out and that he had died… a very wealthy man” (p.137).

This comment by the grandmother hints on her unconscious materialistic desires about money, and is even shameful enough to impart this negative personal quality onto her grandchildren. Moreover, this quality is seen in the children when O’Connor writes about June Star as she speaks about the roadside diner where they have stopped. June Star says “I wouldn’t live in a broken-down place like this for a million bucks” (O’Connor, 2012, p. 137). June Star is showing her materialistic desires when she states that she has no care to live in anything but luxury, even for a large sum of money.

Further in the story, the children throw a tantrum, even resorting to violent tactics, in order to get their way and visit the old estate where hidden valuables are rumored to be stashed. O’Conner (2012) writes: “The children began to yell and scream that they wanted to see the house with the secret panel. John Wesley kicked the back of the front seat and June Star hung over her mother’s shoulder and whined desperately into her ear…

The baby began to scream and John Wesley kicked the back of the seat so hard that his father could feel the blows in his kidney” (p.139). Again, O’Connor illustrates the Id of the children as they seek gratification of their desires, which is to get the hidden valuables. This shows the materialistic values that the young children hold. O’Connor’s use of psychoanalytic ideas helps further convey her theme and tone to the reader.

O’Connor also employs a number of examples of irony in her story to better involve the reader. The grandmother states “I wouldn’t take my children in any direction with a criminal like that aloose in it. I couldn’t answer to my conscious if I did” (O’Connor, 2012, p. 134). This statement, while foreshadowing to a certain degree, turns ironic at the end of the story, as it is the grandmother that detours the family down the dirt road, where they ultimately come into contact with the Misfit, and are killed.

O’Connor’s story brings the reader into the realm of death by her use of symbolism, irony, and psychoanalysis. Her use of symbols and allusions of death, seeking gratification for personal desires, and the idea that the characters meet an ironic death, all build a solid base in which to convey her theme that living a good, pure and wholesome life may spare you from evil. The character’s may feel on top of the world as they travel down the dusty, winding road of life, but ultimately die, due to their selfish ways, in a reddened, deep ditch, at the edge of a dark woods.

Short Story A Good Man is Hard To Find. (2016, May 26). Retrieved from https://studymoose.com/short-story-a-good-man-is-hard-to-find-essay 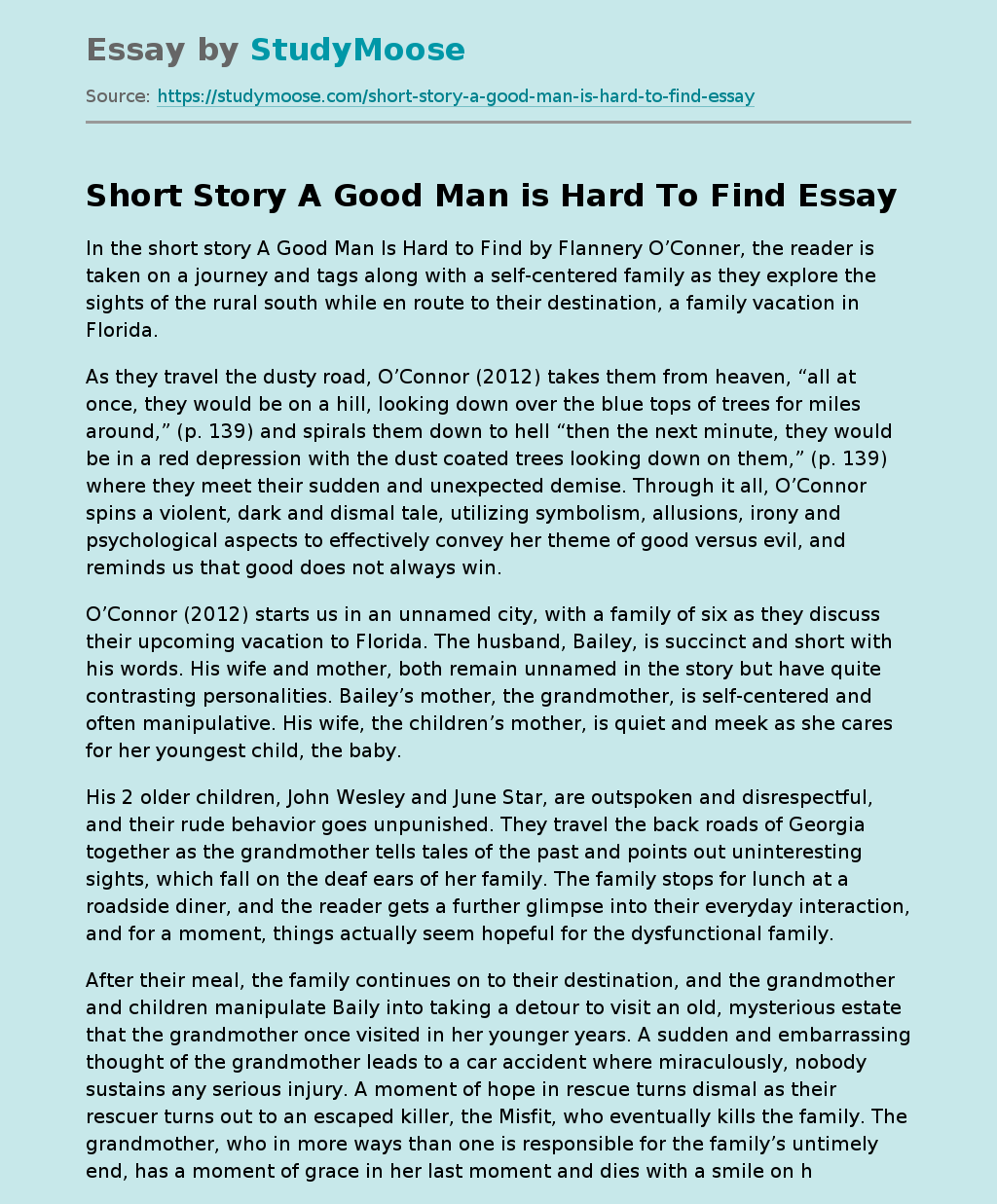