Shopping has become a daily activity which happens a billion times in America and around the world. We cannot imagine how our lives would be affected if shopping was suddenly stopped. Malcolm Gladwell and Anne Norton both write articles about two sides of modern day shopping: how consumers have impacted the retail industry and how the industry influences consumers. In the article ” The Science of Shopping,” Malcolm Gladwell, a well-known writer and journalist, analyzes the shopping behaviors of customers and how retailers can lure customers; while Anne Norton, a professor of political science at the University of Pennsylvania, in “The Signs of Shopping” focuses more on different types of shopping and the construction of identity which customers gain through purchasing.

Don't use plagiarized sources. Get your custom essay on
“ “The Science of Shopping” versus “The Signs of Shopping” ”
Get custom paper
NEW! smart matching with writer

Although two articles argue about different aspects within the same topic, the article by Gladwell seems to be stronger than Anne Norton’s argument. Gladwell gives solid scientific evidence, which are based on Paco Underhill’s study of retail anthropology, so his argument is convincing, while Norton’s article has a lack of proof and is flawed when she stereotypes women as “recognition dependence” (106).

Just looking at the title of Gladwell’s article “The Science of Shopping,” the readers are eager to find out what the author means with the term “The Science.” In the article, Gladwell clarifies how shoppers’ behaviors influence retail business, and his arguments are firmly supported by Paco Underhill’s study. Paco Underhill, a talented and passionate environmental psychologist, has studied human behaviors and many aspects of shopping by using the time-lapse photography as a tool to “determine why a store worked or didn’t work” (Gladwell 98).

He has actually become an expert in the field: “Thus was born the field of retail anthropology, and, not long afterward, Paco founded Envirosell, which in just over fifteen years counseled some of the most familiar names in American retailing…and a number of upscale retailers…” (Gladwell 98). Based on his thorough research, Paco has developed interesting ideas and theories such as “the Decompression Zone,” “the butt-brush theory,” and “the Invariant Right”. The goal of a mall is obvious-to attract shoppers and convince them to purchase as much as they can.

Nowadays, especially when the retail business in crisis, there are many factors the shop owners need to know such as how the environment affects customer’s behaviors and how the sellers can fulfill customer’s desires in the best way. Paco has been successful in the field because he focuses on these details. Gladwell concludes that Paco’s theories “seek not to make shoppers conform to the desires of sellers but to make sellers conform to the desires of shoppers” (103). One thing that is persuasive about Gladwell’s article is the way he explains “the butt- brush theory” and “the Decompression Zone.” The aisles between rows are usually narrow so much that customers feel too uncomfortable to choose clothes. Because the store’s space is too small to display all products, the store owner has to minimize the space for aisles and fitting rooms. Moreover, they also hang clothes high above the store’s entrance as they think that putting clothes as much as they can in the front of the store would make customers pay more attention to their stores. However, from observations, stores that are popular usually do not show many clothes in the front space, which is “the Decompression Zone” in Gladwell’s words. Stores with large spaces make shoppers feel more comfortable when choosing clothes, which means increasing the quantity of customers. This observation fits very well with the two concepts in Gladwell’s article. It also shows the importance of Paco’s theories in the increasing of goods that people purchase. Another reason that makes Gladwell’s article more logical than Norton’s is that he does not separate into different types of shopping likes Norton does. The way he organizes his essay make it easier for readers to follow his ideas by giving specific evidence and a clear thesis in the beginning of passages. For example, Gladwell writes “What Paco likes are facts” (100). The sentence is short but strong and clear enough to emphasize the idea of the following paragraph. The way Gladwell describes Paco Underhill and his expression of Paco is objective. Although Gladwell says “It isn’t a hostile gaze, because Paco isn’t hostile at all,” readers do not find any kind of subjective emotion in his article (102). He keeps his tone throughout the article neutral, neither positive nor negative. This is one of the strongest points that makes his essay more convincing compared with Norton’s essay. Gladwell is specific when talking about Paco. He gives a brief description of Paco and the way he feels when he interacts with Paco: “Paco Underhill is a tall man in his mid-forties, partly bald, with a neatly trimmed beard and an engaging, almost goofy manner” (Gladwell 98). This gives readers a clear image of Paco Underhill like he actually stands before them.

In contrast, Norton shows her negative voice in the “Shopping at the Mall” part of the article. Norton writes ”Those who own and manage the mall restrict what come within their confines” (105). Using many strong verbs, “restrict,” “permit” and a clear negative tone, Norton strongly confirms that “Neither freedom of speech nor freedom of assembly is permitted there” (105). Despite that, Norton is unsuccessful in persuading readers to believe that this idea is true. Norton fails in keeping the objectiveness throughout her essay. In doing so, Norton shows readers her bias on shopping at the mall rather than the negative side of mall owners.

Moreover, Norton divides her essay into two main parts: “Shopping at the Mall” and “Shopping at Home.” However, the way she organizes her essay confuses readers. There is a weak relationship between the idea about shopping in the mall and the idea about women (consumers) gaining identity through merchandising. The idea about customers’ identity does not support her previous idea, which easily makes it difficult for readers in following the flow of her essay.

Also, Norton is flawed when using the stereotype and lack of necessary proof in her later paragraphs. Norton mentions women as the typical customers, whose identities “were made contingent not only on the possession of property but on the recognition dependence” (106). This stereotype of women is no longer correct in today’s society when men and women are equal. Women no longer depend on their husbands for money. The women’s economic dependence is continuously repeated several times in her article without any proof to support its accuracy. In addition, it may be true that shopping is an occasion that allows women to have a joyful time with friends without the presence of husbands. Women are responsible for 85% of consumer purchase (“Female Marketplace”). Although Norton has explained the role of shopping in women’s daily lives, she does not give solid evidence to support her claim as well. However, it does not mean that Gladwell does not have these types of stereotypes. As a matter of fact, both Gladwell and Norton seem to have the same opinion on this stereotype: “There is the father…the wallet carrier” (Gladwell 102). Gladwell considers “the father” or men as “the wallet carrier,” which also shows the economic dependence of wives on husbands. However, Gladwell does not emphasize this problem. “The wallet carrier” is just an example that Gladwell uses to demonstrate the way Paco analyzes his videos. Because of its minor part, the presence of proof is unnecessary and does not affect the persuasion of Gladwell’s essay.

Despite all of his good points in his article, Gladwell prefers shopping at the mall because he is only talking about how Paco analyzes the customers’ shopping behaviors through their movements and steps to find suitable ways to lure customers. However, he seems to forget there is also the “shopping at home” type. Shopping at home is becoming more and more popular when people do not have much time to go shopping anymore. In this aspect, Norton is better in generalizing all types of shopping. In her essay, she clearly points out two types of shopping, “Shopping at the Mall” and “Shopping at Home.” Despite this fact, Gladwell still does a better job in writing about the “Shopping at the Mall” type.

On the whole, despite the fact that both articles focus on shopping, Gladwell’s article is stronger than Norton’s because throughout his paper, Gladwell gives solid scientific evidences based on the research of retail anthropology with the applicable ideas and theories such as “the Decompression Zone,” “the butt-brush theory,” and “the Invariant Right”. Meanwhile, the inability to keep her voice objective, the lack of solid evidence for her claims, and the disorganization make the article “The Sign of Shopping” by Anna Norton ineffective in convincing the readers. However, it cannot be denied that Norton’s article is the more comprehensive one when Norton brings up all main kinds of shopping, whereas “The Science of Shopping” shows preference for shopping in malls. A good point is that both articles are written to give readers different views about shopping. Shopping is not only a habit of many people but also a science that plays a key role in most industries. Once retailers combine the ideas and theories of Paco Underhill in Gladwell’s article as well as the information on shopping through catalogs in Norton’s article and apply those knowlege into their businesses, they would be successful in stabilizing their places in the changing market with fierce competitions.

“The Science of Shopping” versus "The Signs of Shopping". (2016, Feb 29). Retrieved from https://studymoose.com/the-science-of-shopping-versus-the-signs-of-shopping-essay 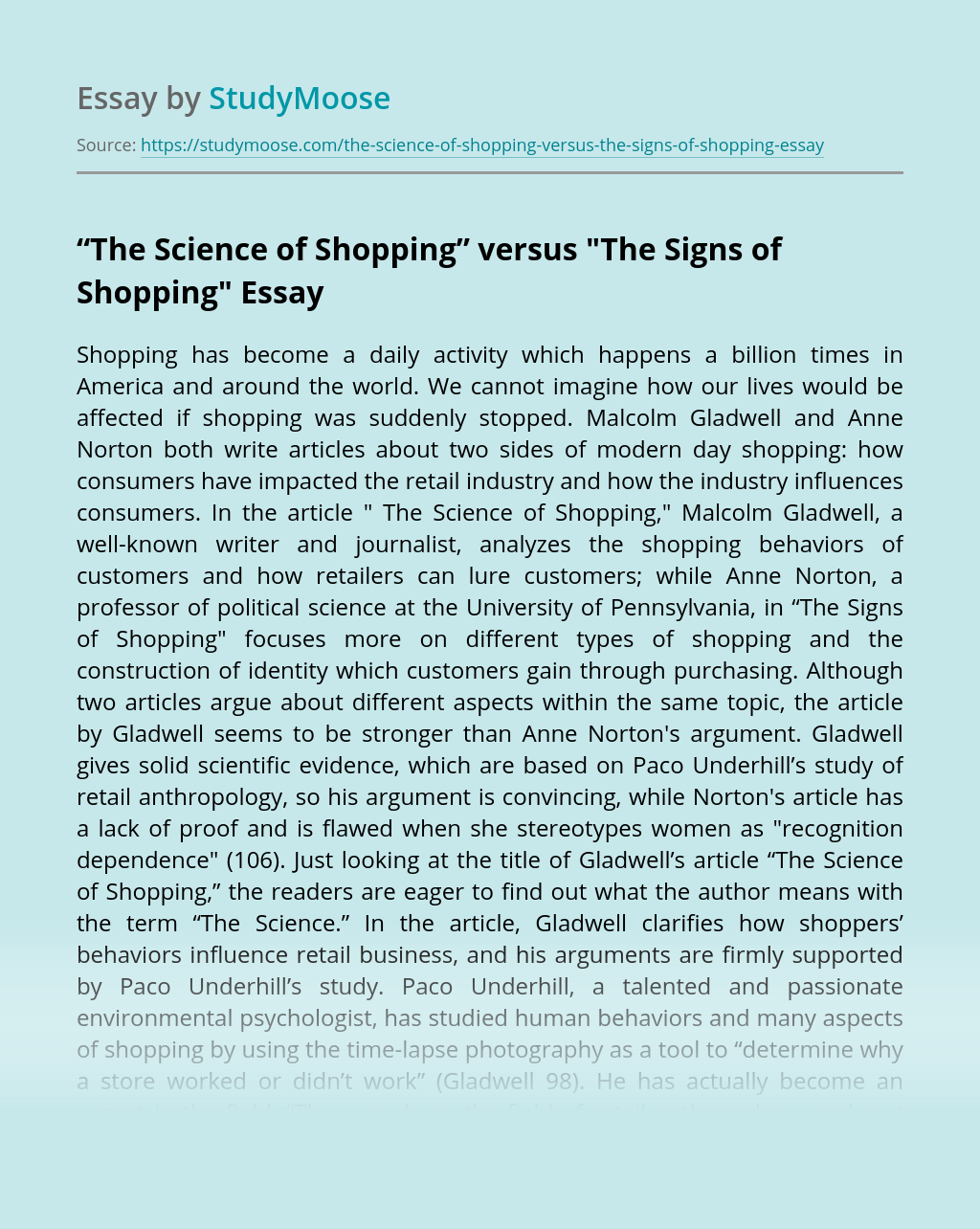