The Working Mom versus the Stay at Home Mom

“The Working Mom versus the Stay at Home Mom”

One major difference between a man and a woman that anyone would refuse to argue with is that women have the ability to bear children. Most of the time, it is in the traditional marriage setting but this is not always the case. Many children are born outside of wedlock as well as many marriages end in divorce where the children are raised primarily by one parent. Women have long been thought of as the caregivers and men as the breadwinners.

Don't use plagiarized sources. Get your custom essay on
“ The Working Mom versus the Stay at Home Mom ”
Get custom paper
NEW! smart matching with writer

Nowadays, many women have a high paying corporate job which offers them status and skills. According to a research study titled “Quality of Care Attributions to Employed Versus Stay-at-Home Mothers”, for over a decade now most women who have children are still working (183).

National work and family policies are more accommodating to employed mothers than they used to be decades ago. Some companies offer onsite daycare facilities and have flexible schedules which allow more accommodating hours for mothers to tend to their children. According to “Quality of Care Attributions to Employed Versus Stay-at-Home Mothers”, the traditional ideal that a woman should be with her children is still a predominant social ideal (184).

Many stay at home mothers want to return to the workforce but find it difficult to do so. In the article “After Mommy’s Long Nap”, many career minded women left their jobs after many years of service to become a full time stay at home caregivers(1). According to “After Mommy’s Long Nap”, many women who were once self-proclaimed workaholics easily became “mom-aholics” (2). They did not want a nanny to see their children take their first steps (2). They wanted to be as involved as they could in the first part of their child’s life and what is also perhaps the most important. It is during childhood that people discover the world and where life seems to be more carefree.

Most children do not have to worry about rent being paid or food being put on the table. Most of us wish we could rewind back to that time in our lives when we lived carefree and in the moments of first discovery. One could argue that this could be the reason why many women leave their jobs to watch their children during this part of their lives. On the contrary, many women also find that after ten years of being a stay at home mother their children need them less and less each day as they become more self-reliant. According to “After Mommy’s Long Nap”, while being a stay at home mom has “joyous” moments, many times it can also be very dull and mundane (2). Many women start to crave independence and intellectual stimulation that being a member of the workforce once gave them.

You stayed around for your children as long as you could, inhaling the gold shavings of their childhood, and at the last minute you tried to see them off into life and hoped that the little piece of time you’d given them was enough to prevent them from one day feeling lonely and afraid and hopelessness. You wouldn’t know that outcome for a long time (3). Another point to mention is that many women who have been out of work for several years may find it hard to find employment in their former position. Employers may find that their skills are rusty and out of date. According to the article “After Mommy’s Long Nap”, after two years of being unemployed one loses eighteen percent of their earning power and thirty-seven percent of earning power is lost after three years (3). That is quite a pay cut. Fortunately, there are community programs which offer refresher job skill courses in areas such as “information technology, economics, accounting, and corporate governance.” Still, many other stay at home mothers choose to start their own businesses or even begin to work from home.

Working mothers also feel that it can be difficult to raise children while fostering their own personal career goals. According to article “Girl Friday” by Forbes Magazine, working and stay at home mothers both agree that they are responsible for the majority of all at home work such as cleaning the house, doing laundry, cooking, and shopping as well as childrearing activities such as bathing, feeding, and entertaining their children (1). In a poll conducted for “Girl Friday”, ninety-two percent of working moms are overwhelmed with workplace, home, and parenting responsibilities (1). Interestingly, seventy percent of working moms also feel resentment towards their partners over shared parenting responsibilities. However, the poll also found that working moms and stay at home moms agree that in child discipline men do share the activity with them equally (2). Now, if only the working father could take on more of the housework then mothers would be happier!

In conclusion, not all working mothers have a choice as to whether they can take off work to raise their child. Many mothers nowadays are single parents or there are too many expenses to rely on only one working parent’s income. This article compared and contrasted the benefits and drawbacks of being a stay at home mother as well as a working mother. Stay at home mothers have the opportunity to experience life’s greatest moments with their children but may become bored or find it hard to reenter the workforce. Working mothers have the advantage of pursuing their own personal careers but lose time they could have spent on their child’s personal development. In the end, the decision as to whether a mother should continue to work or stay at home to raise their children is a choice which is life altering and should be carefully thought through.

The Working Mom versus the Stay at Home Mom. (2016, Apr 11). Retrieved from https://studymoose.com/the-working-mom-versus-the-stay-at-home-mom-essay 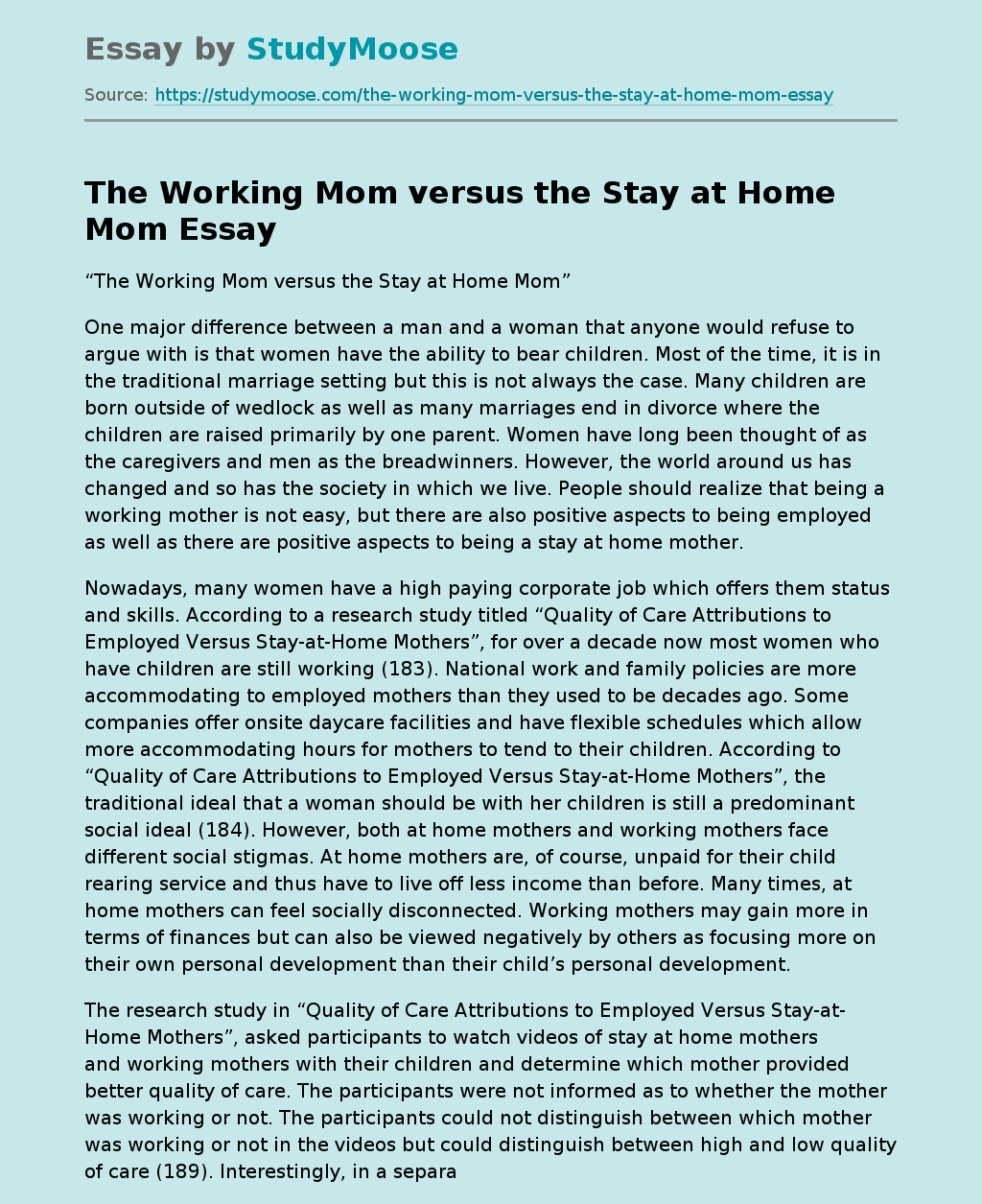