The Scholarship Jacket is a story by Marta Salinas and is about a Mexican girl named Martha. Every year in Texas, a scholarship jacket was presented to the class valedictorian. This scholarship jacket was about the only object in Martha’s mind. She was a skinny girl, and not very pretty either. However, she was incredibly smart and had maintained an A plus average in her eight years of school. That year, all her hopes came crashing down. She overheard a conversation between two arguing teachers, about how the jacket should be given to Joann, since her father was part of the Board and also owned the only shop in town.

Don't use plagiarized sources. Get your custom essay on
“ The Scholarship Jacket ”
Get custom paper
NEW! smart matching with writer

The next day the principle called her in, telling her that the scholarship jacket was going to cost fifteen dollars, and if she couldn’t pay for it, it would be given to the runner-up. Martha left school tearfully, and was even more heartbroken when her a Grandfather said she couldn’t have the money.

She wept her heart out in the bathroom, though she knew her Grandfather was right when he said that she shouldn’t have to pay for something she earned. The next day, she dejectedly told the principle that she couldn’t have the scholarship jacket and explained why.

See more: how to start a scholarship essay

She made a slip-up as she was about to exit the office and mentioned Joann’s name. The principal, feeling guilty told Martha that she would have the scholarship jacket.

So, in the end, Martha knew that she earned her jacket, and hadn’t purchased it. The theme of this story that I recognized was that when you earn something, it doesn’t mean you purchase it. Just like the scholarship jacket was to be earned and not purchased. Martha had the best grades in her school, and to represent that, she was supposed to get the jacket.

Instead, since Joann’s father had a higher social status than Martha’s father, so it would have benefited the school to present Joann with the jacket. So, to make their (not that Martha didn’t already know the plan) plan work subtly, the priced the jacket fifteen dollars. Obviously this wasn’t right, since originally a scholarship was meant to be free. The author explains this through Martha’s grandfather’s wise words, “Then if you pay for it, Martha, it’s not a scholarship jacket anymore is it? “. Those simple words summed up the entire theme to me. 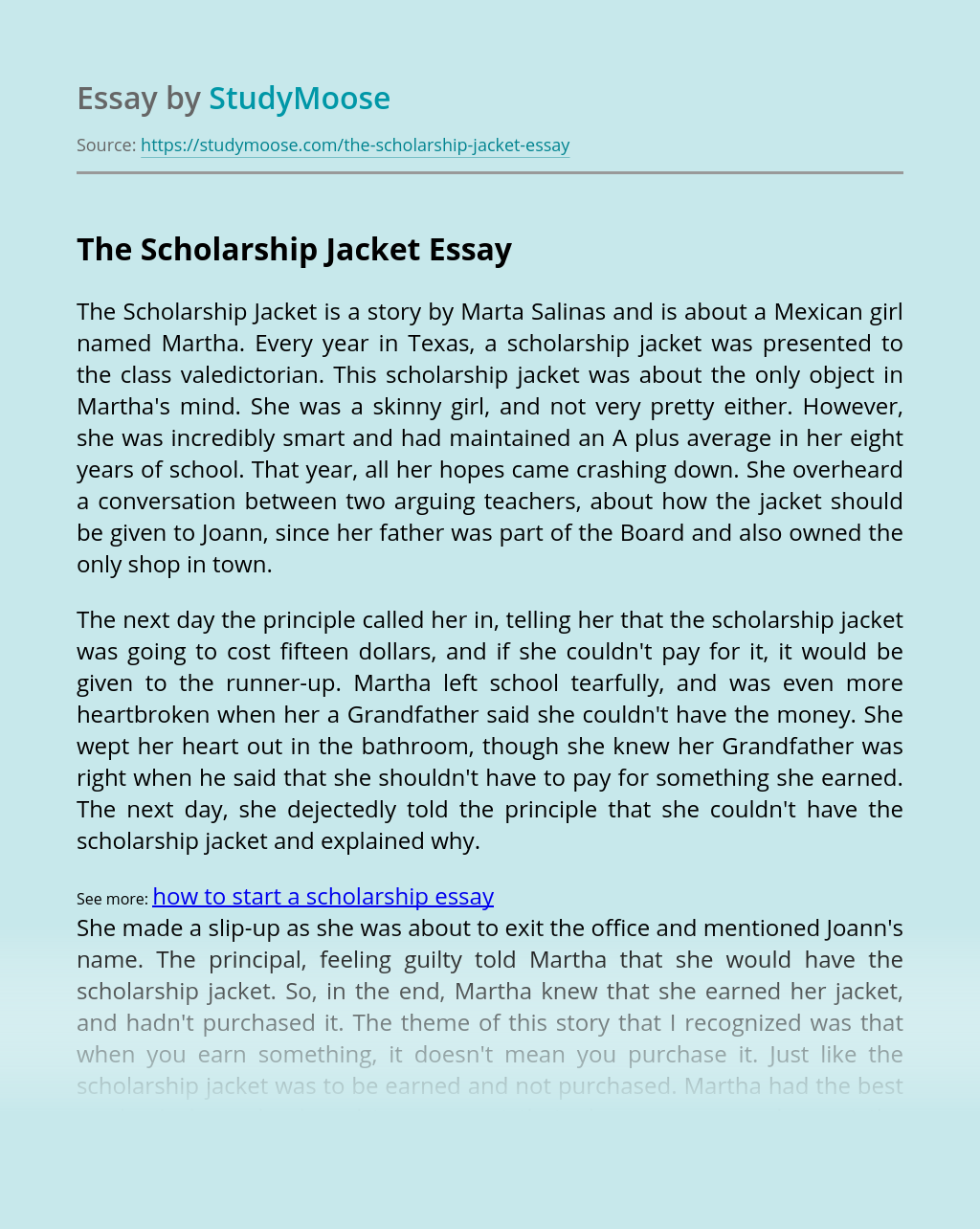