The Women of Full Metal Jacket

In Stanley Kubrick’s “Full Metal Jacket”, it is difficult to determine the role that women play simply because of the glaring lack of female characters. In total, only three women actually appear in the movie, and two of those are prostitutes; the third isn’t revealed as a woman until the final 10 minutes of the film, and none of them are given names. In fact, until the sniper’s gender is revealed, women only play a role as objects for the soldiers’ amusement.

Don't use plagiarized sources. Get your custom essay on
“ The Women of Full Metal Jacket ”
Get custom paper
NEW! smart matching with writer

In all interactions between the genders, it is obvious that the male soldiers always hold complete power over the women, able to bargain their “services” down to a paltry five dollars per soldier. For one of the prostitutes, a soldier even effectively acts as her pimp, determining whom she services and for how much. In contrast, the role of the female sniper completely flips this gendered scheme of power-relations by using an intermediary, her rifle, to gain power over the male soldiers.

For these G.I.s, the idea that women don’t exist on the battlefield is hammered into them from boot camp. This process starts when the drill instructor marches into the barracks and instructs his soldiers that they should give their gun a female name and sleep with it at night because it will be the only female company they will receive during their tour of duty. In this manner, the soldiers are directed to receive the same sort of pleasure from killing and battle that they would normally expect from a full relationship with a woman.

On a more abstract level, giving the gun a female name also establishes a mindset that women are “tools” (another name the drill instructor frequently uses to describe the rifle) in order to achieve pleasure for the soldier. In the battlefield, the soldiers subscribe to this philosophy wholeheartedly; taking their gun with them everywhere while leaving their transitory relationships with behind. Similarly, the complete lack of female soldiers in the army sets up an expectation in their minds that all soldiers are male: all soldiers uses their “women” to kill.

The introduction of the female sniper severely breaks all of these preconceptions for the American soldiers in several ways. First, she is a complete departure from the previous female characters in the film. Rather than being subservient to the male G.I.s she dominates them, driving them away from an otherwise abandoned city. By using a rifle, she is in fact co-opting the tools of masculine domination that the American forces have relied on. By taking a tool that the men have identified as female, she is using her own femininity against them as a way of reversing the traditional power roles that the soldiers have come to expect. Secondly, her presence and the close proximity in which she is killed provides a more human and softer face than some of the soldiers had previously experienced.

Joker in particular seems horrified by the facts of war once he is able to see the female sniper up close after she has been shot down. While some of the other soldiers are in favor of letting her suffer, Joker wants to effectively euthanize her. However, even when he makes the decision to shoot her one final time he has significant difficultly coming to grips with shooting a woman. In this way, the sniper once again demonstrates the power of her gender by forcing Joker, a self-described killer, to hesitate. Thus we can see that by making the sniper a female, Kubrick effectively utilizes her gender as a method of reversing the power roles established early in the movie and continued throughout.

The Women of Full Metal Jacket. (2016, Jun 26). Retrieved from https://studymoose.com/the-women-of-full-metal-jacket-essay 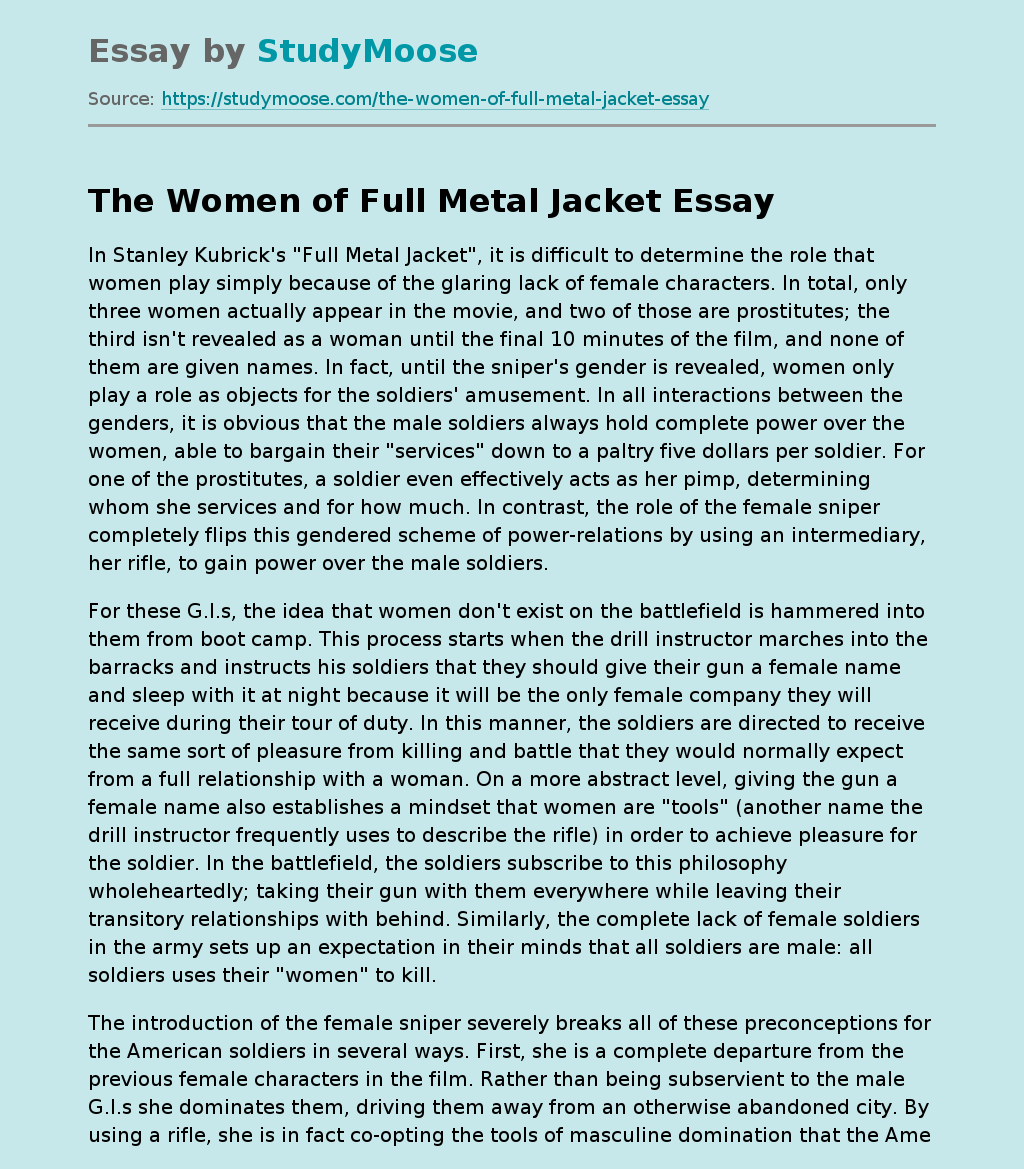