The Disadvantages of Full Day Schools

Full day schooling refers to a longer day at preschool where they not only learn but are also given time for play. (Lamphere, 2009) Full day preschools run for five hours or longer for five days a week. Half day preschools run for approximately 3 hours for five days a week. (Rosamilia, 2008) Researchers have constantly compared these two types of schooling and most studies came to a conclusion that full day schools are better than half day schools. There are a few example of studies conducted to show this.

Turn in your highest-quality paper
Get a qualified writer to help you with
“ The Disadvantages of Full Day Schools ”
Get high-quality paper
NEW! AI matching with writer

Some examples include: A study conducted by Cryan et al. n 1992 in two phases on the effects of half-day and all-day kindergarten programs on children’s academic and behavioral success in school and another study by Hough and Bryde in 1996 which looked at the student achievement data of children enrolled in half day and full day schools.

Both studies showed that full day kindergartens benefit children in terms of academic successes, attendance and there are also fewer cases of retention for them.

(Clark, 2013) Even though full day schools has its benefits, it also has its disadvantages.

Disadvantages of Full Day Kindergarten According to research, there are a number of disadvantages for Full Day kindergarten. Firstly, there is a lack of spaces for children. According to an article, in Canada, there is a lack of space to accommodate the rising number of children if they change their program to full-day kindergartens. In Calgary, Canada, it is believed that 50 out of 137 elementary schools would not be able to accommodate more than their current half-day school and the implementation of full-day programs would force some grades to be reshuffled to other schools. Cuthbertson & Herald, 2012) In some other articles, in United States, there has been lack of space to set up full-day kindergarten. (Martinez, Stuber, and Snider, 2006; Haglund, n. d. ) Thus, there have been talks going on as to whether they should set up full-day kindergartens in that district. (Placek, 2012) Another disadvantage would be the high cost for full-day programs. This includes the expenses for equipment, staff and space. In the article regarding the changing to the full day program in Canada, they mentioned that the cost of funding it for a year would be around $200 million.

Another article stated that it would cost $2 million annually after an initial startup cost of $505,600. And, it would have required another $7 million from the district’s reserves to pay for construction of additional classrooms and multipurpose rooms. (Placek, 2012) Another article by a graduate from East Stroudsburg University also states that the amount of money spent on the teachers’ salaries are also high because they now have to hire more teachers for full-day kindergartens. An average teacher in the US would earn about $33,000 a year.

Thus, in the case that the kindergarten hires more teachers, they would have to spend about $132,000 to $165,000 per annum just on salaries. This would increase the burden on the taxpayers. (Morse, 2008) This point is also further supported by research conducted previously. (Martinez, Stuber, and Snider, 2006; Hugland, N. A. ; Guilderland Central School District Early Childhood Advisory Committee, 2008) The third disadvantage of full-day kindergarten is that it requires more staff and staff aides. Many articles stating the disadvantages of full day support this point.

For example, in one article, it states that when there are half day sessions, one teacher can teach two sessions: one in the morning and one in the afternoon. However, if it is a full-day session, it requires more teachers to teach. They would also need more teacher aides. In the case where the kindergarten does not want to hire more teachers, they would expand each class and add in more teacher aides to balance the teacher-child ratio. In a study conducted at the Guilderland central school district, it also states that they would require more teachers to teach and balance the teacher-child ratio. Early Childhood Advisory Committee, 2008).

Besides these, there are a few more disadvantages to full day kindergartens. They include having more time at school and less time for ‘kids to be kids’. (Circele, 2009; Brower, 2013). It also includes teaching children academic and skills before they are ready for it. (Haglund, N. A. ; Morse, 2008) One of the articles found went on to explain that the kindergarten may teach too advanced skills for children instead of teaching them minor skills which are important. In summary, even though full-day seems like a good option for everyone, it does have its disadvantages.

Benefits of Half Day Kindergartens Likewise, half-day school has its benefits. Firstly, half day kindergarten programs are less stressful. According to Walsh (2013), children would feel relaxed while trying to adjust to the structured classroom environment. Furthermore, they are able to make good transitions from kindergarten to first grade. Another source states that half-day programs are viewed as providing continuity and systematic experience with less probability of stress than full-day programs. (Rothenberg, 2009)

Secondly, the children also receive the same quality of education as those in full day preschools or kindergartens. Ast, 2010;Rothernberg, 2009) The children go through similar experiences but just that one is longer and the other is shorter. These show that there are other programs besides full day kindergartens which young chidren can benefit from. Conclusion In the context of Singapore, there isn’t much of an issue about half day versus full day kindergarten. This is because Singapore has mainly focused on half day kindergartens. Some of the reasons as to why that might be the case is similar to the disadvantages stated above.

Just like in some parts of Canada and US, Singapore has limited space to set up full-day kindergarten and it requires more sources, equipment and etc. Singapore’s space is already limited in space and it requires more space for other more important things thus, it can’t be used just for kindergartens. Statistics have shown that 15% of Singapore’s land has been located for housing, 17% for recreational and community needs. The rest of the land is used for commerce, industry, infrastructure, utilities and transport and reservoirs, defense facilities and cemetery and undeveloped land.

Yearbook of Statistics Singapore, department of Statistics Singapore[online], 2012) This shows that there isn’t sufficient space to build more kindergartens or expand it. If Singapore was to expand or make kindergartens full day, it would require more teachers or teacher aides. There is also a lack in kindergarten teachers now. Recently, along the roads, many jobs offers for preschool teachers were noticed. This is also supported by a Strait Times article on 20 July 2012. It stated that there is already a shortage of teachers. (Vadaketh, 2012)Thus, if full day kindergartens were established, there would not be enough teachers.

The two main factors determining which programme they would send their child to would be whether they are working and the cost of the programme. Parents of children these days are usually working adults. They do not have time to take care of their children because they are working. Thus, they would rather send them to childcares because it is more convenient and safe. If they were working and they send their child to half day kindergartens, they have to make other arrangements for their child so that the child would not be left alone.

While full day kindergartens may be more convenient for working adults, half day schools (kindergartens) are cheaper. According to the list of kindergartens found on the Investmentfriend. com forum, the pricing ranges from as low as $80 to $500. However, the costs of childcare centres are about $700 and above, depending on the childcare. Thus, some parents might not be able to afford childcare and would send their child to half day kindergartens. Thus, all in all I believe that the choice of schooling depends on each family and individual if childcare was seen as an full day kindergarten program.

The Disadvantages of Full Day Schools. (2016, Oct 02). Retrieved from https://studymoose.com/the-disadvantages-of-full-day-schools-essay 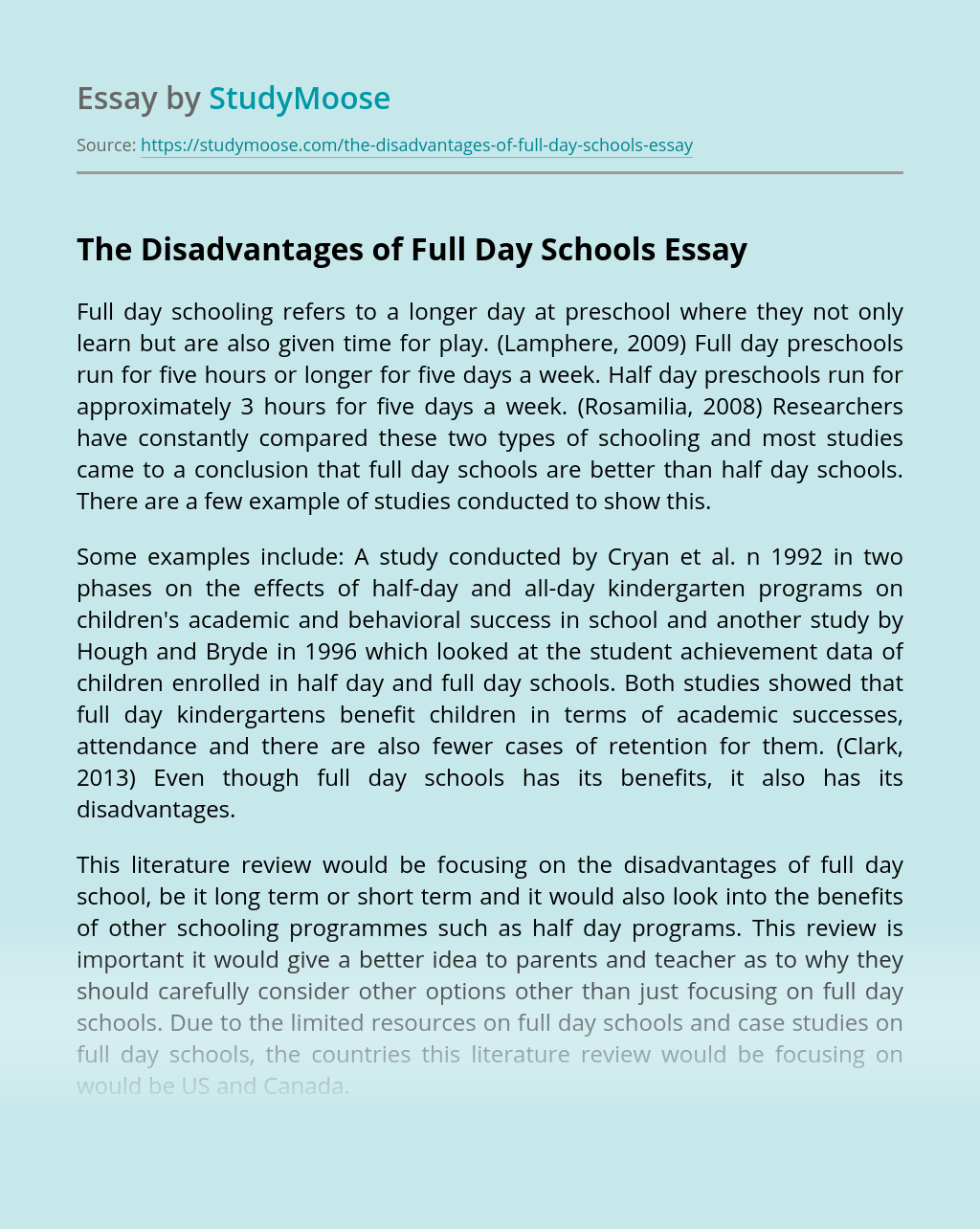 Turn in your highest-quality paper
Get a qualified writer to help you with
“ The Disadvantages of Full Day Schools ”
Get high-quality paper
Helping students since 2015
Stay Safe, Stay Original