Electrolysis is the chemical decomposition of a compound by applying an electric current through a solution containing ions. Electrolytes are required to conduct electricity. They must be dissolved in water or in molten state for the electrolytes to conduct because then, the ions are free to move allowing the solution to be electrolyzed.[1] In electrolysis, reduction happens at the cathode whilst oxidation happens at the anode. Reduction is the loss of electrons and oxidation is the gain of electrons.

In this experiment, I will be electrolyzing nickel sulphate (NiSO4) solution.

To further explain the aim of this experiment, I have formulated a research question: “How does changing the current affect the mass of nickel deposited at the cathode in the electrolysis of nickel sulphate?”

I predict that as the electrical charge increases, the mass of nickel deposited at the cathode after electrolysis will also increase. Faraday’s law of electrolysis, which investigates the quantitative relationship on electrochemical, can support this.

Faraday’s law states, “The amount of the substance produced by current at an electrode is directly proportional to the quantity of electricity used”.[2]

During this electrolysis experiment, the aqueous solution of Nickel Sulphate will transfer Nickel from the anode to the cathode. Therefore indicating that the nickel sulphate solution is ionised by the electric current and dissociated into nickel ions and sulphate ions. This can be represented in a chemical equation: NiSO4 ï Ni2+ + SO42-

At the cathode, positively charged nickel ions are formed there and Ni2+ ions are reduced to Ni by gaining two electrons: Ni2+ + 2e ï Ni

At the anode, Ni is oxidised into Ni2+ by dissolving and going into the nickel sulphate solution and finally depositing nickel at the cathode: Ni ï Ni2+ + 2e

When the electrolysis circuit has electricity flowing, the nickel ions will float towards the electrode.

Therefore, when the current is increased, the nickel ions flow faster and reaching the cathode faster. So there will be more nickel deposited as the rate of electrolysis is increased.

Magnitude of current flowing into the electrolytes (A)

The 5 values I will use for current flowing into the electrolytes will be:

To vary the values of current, a variable resistor will need to be used in the ciruit to control the flow of current. The amps values can be determined using an ammeter, which is also attached to the electrolysis circuit.

The mass of nickel deposited at the cathode after electrolysis will be measured for results. This will be determined by weighing the nickel electrodes before the experiment and after electrolysis. For this, a electronic balance will be used to weigh them.

The entire experiment will be done in room temperature of around 24°C to ensure that the temperature for each trial will be the same. The temperature will be measured using a thermometer.

The volume of nickel sulphate for each trial will be kept at 100cm3. Measuring cylinders will be used for accurate measurement.

The timing for the experiment needs to be controlled very carefully to ensure the amount of current passing the electrolytic cell will have the same amount of time. For each trial, it will run for 2 minutes. This will be determined using a stopwatch.

To keep the voltage of this experiment constant set at 5V, we only need to switch the power pack to 5V and keep it there.

The distance between the nickel electrodes needs to be kept constant so it doesn’t affect the amount of current passing. The distance will be kept at 40mm and this will be measured using a ruler.

Before using the electrodes in the experiment, sand paper will be used to remove the oxide layer on the sheet of nickel. This will ensure the surface of all electrodes to be the same and will have the same surface for ions to attach to.

The electrodes need to be kept the same size to ensure there will be an equal surface area for nickel to deposit on. The nickel sheet electrodes will be 10mm by 50mm long. This is measured using a ruler.

Equipment such as measuring cylinders, power packs, wires will need to be the same. This is because different equipment would have different uncertainties, which may affect the final readings of the experiment.

Long hair needs to be tied back

To ensure accurate and reliable results, I will be undergoing 3 trials for each experiment. This is so I will then be able to calculate an average, thus my data will be more reliable. I will also maintain all the controlled variables and only varying the input of current.

Set up the apparatus and circuit as shown in the diagram

Fill a beaker with 100cm3 of nickel sulphate

File the Nickel electrodes using sandpaper to remove any impurities

Place each electrode pair into the beaker with nickel sulphate

Attach the electrodes to opposite sites of the beaker (measure with a ruler the distance between, it should be around 4cm) by bending the electrodes it

Adjust the current to 0.5 amps using the variable resistor

Using the stopwatch, time for 2 minutes whilst looking at the ammeter to ensure the current remains the same

After 2 minutes, turn the power pack off and take the cathode out.

The table above is a draft up of the raw data results table I will be using for my final readings from the experiment. It includes columns with headings, 3 trials, units and uncertainties and the average mass gained from the whole experiment. From these results, I can also draw a graph to easier represent the data and can also spot patterns or anomalous data that occur in the results.

The actual theoretical mass of nickel deposited at the cathode can also be calculated with a few equations:

Moles of Nickel= moles of electrons/2

The total percentage of random uncertainty can be calculated for my final answer in order to determine whether my experiment was fully successful and that the results are accurate. 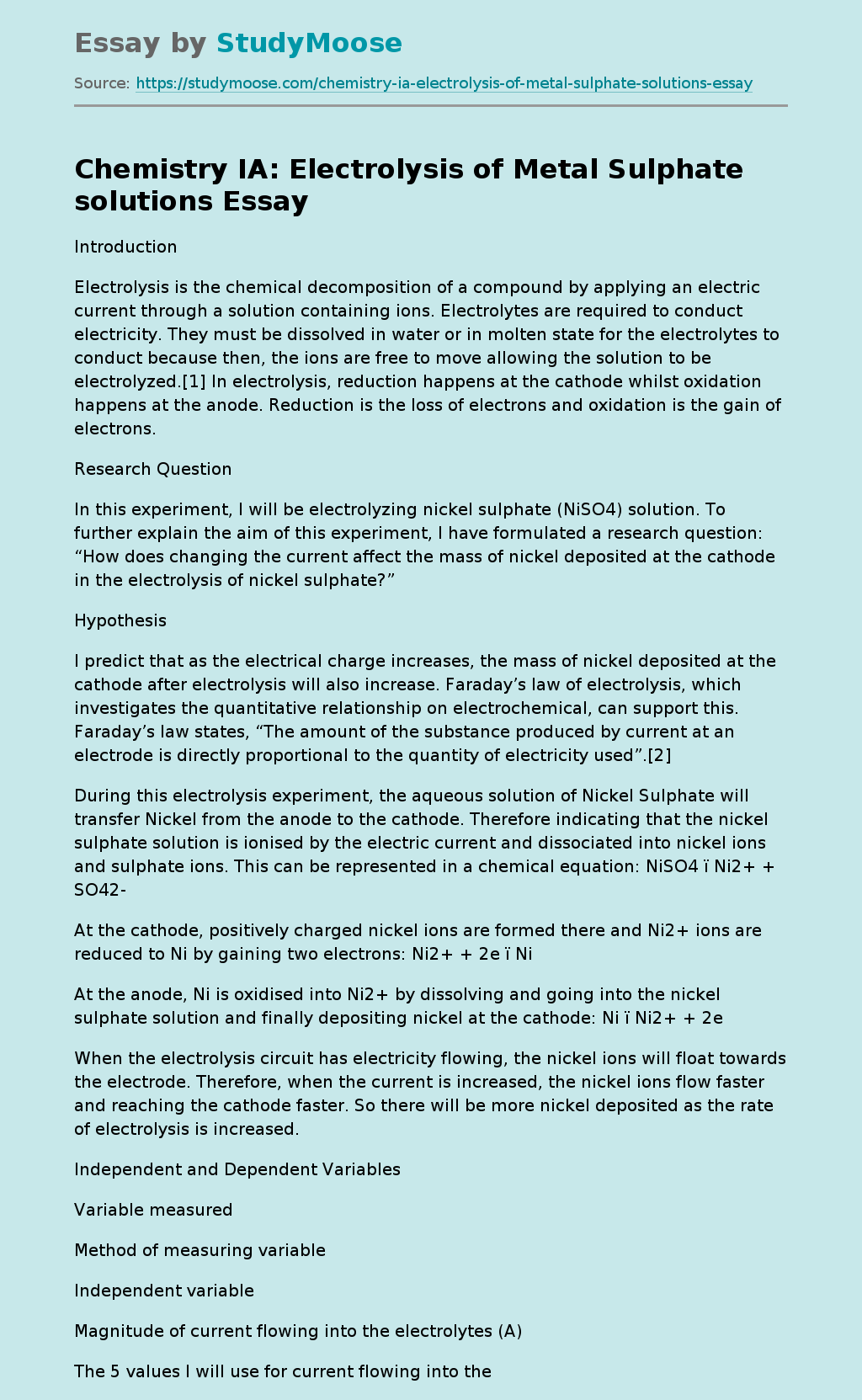