Investigating the rate of electrolysis

The experiment I will be carrying out is aimed to observe the amount of Copper (Cu) metal deposited during the electrolysis of Copper Sulphate solution (CuSo4) using Copper electrodes, when certain variables are changed

In this investigation I will change variables within the experiment, which will hopefully change the rate of reaction and also the deposit of copper metal at the cathode.

These variables could include:

· Concentration of solution/ Quantity of Solution

· Distance between the electrodes

These variables all have a way of changing the rate of reaction.

Changing the voltage of the circuit would affect the rate of reaction because as Ohm’s law states, As charged particles try to make their way round a circuit they encounter resistance to their flow which means that they collide with atoms in the conductor. More resistance means that more energy is needed to push the same number of electrons through part of the circuit. So by increasing the voltage more electrons will flow through the circuit, which means there would be a lot more electrons flowing in the circuit therefore there will be a lot more energy being produced.

This means that the more voltage flowing through the circuit the faster the reaction will take place.

Concentration of a solution:

If we were to say in this reaction increasing the concentration would speed up the reaction I shouldn’t assume that if I double the concentration of one of the reactants that I will double the rate of the reaction. It may happen like that, but the relationship may be more complicated. In order for any reaction to happen the particles must first collide. This is true whether both particles are in solution, or whether one is in solution and the other a solid. If the concentration is higher, the chances of collision are greater as there are more of the particles that react in the solution therefore they can collide more frequently which means they will react more frequently, speeding up the reaction. These same rules would also apply if you increased the quantity of the solution.

As you can see when the concentration is higher the ratio of molecules in the solution to the reactant is higher therefore there will be more collisions and the reaction will happen faster.

A solid in a solution can only react when particles collide with the surface.

The bigger the area of the solid surface,

the more particles can collide with it per second,

and the faster the reaction rate is. You can increase the surface area by breaking it up into smaller pieces.

A powder has the largest surface area and will have the fastest reaction rate. This is why catalysts are often used as powders as they speed up the reaction anyway but as they are also a powder they do it even more rapidly.

Therefore gradient of the plot of a graph will be twice as steep.

With all these factors in mind I predict that:

· if the current used to electrolyse the copper sulphate solution is increased, then the mass of copper deposited on the copper cathode will increase.

· as the current is increased the mass of the anode will decrease.

And this is why the anode loses mass, and the cathode gains mass.

My reasoning behind my prediction is that the mass loss of the anode is the same as the mass gained at the cathode, which is clearly stated in Faraday’s Law.

This law states that the amount of copper deposited on the cathode and lost from the anode depends on the number of electrons passing through the circuit, i.e. upon the charge passed through the power supply. The charge passed, q in Coulombs. A Coulomb is the quantity of electricity that flows when one amp is allowed to flow for one secon. 96,500 Coloumbs is 1 faraday which is one mole of electricity. Is related to the current, I (in amps) and time, t (in seconds). The formula is,

From this equation I would be able to predict the results I will be getting from my investigation.

My apparatus will consist of:

To make sure that this test is fair at all times, the only variable I will be altering during the experiment, is the current. Therefore, everything else that is used during the experiment must remain the same. These things are, , the resistance in the circuit, the surface area of the two electrodes, and the time that the solution is electrolysed for. Most of these things can be monitored fairly easily. The time that the solution is electrolysed for can also be kept at roughly five minutes throughout the experiment. This is only rough because I am stopping the timer myself and therefore there is the factor of human error, so the time will not be exactly two minutes all of the time.

The measurements in this experiment will be as accurate as they can be with the equipment that is available to me. The mass of the anode will be kept accurate to three decimal places, because this is the accuracy of the scales that are available to me. The time, as I have mentioned before, may be able to be measured to one hundredth of a second using the electronic stop-clock, but as I will be stopping the timer, the human error factor only makes this time correct to one second. To make sure that my results are as reliable as possible, I will repeat each reading three times.

This is to make sure that even if one, or two of the results go wrong, then the other two or three will be accurate. In addition to these factors I will also be weighing only the anode as this is the elctrode that loses mass whereas the cathode gains because of the copper that gets deposited on it. I will be weighing the anode becausee if I weighed the cathode the reasults may become irregular as some of the copper deposited on the catode may fall of when moving it to the scales or even drying the cathode. Therefore I would not be weighing the true mass that has been gained.

Investigating the rate of electrolysis. (2016, Jul 02). Retrieved from http://studymoose.com/investigating-the-rate-of-electrolysis-essay 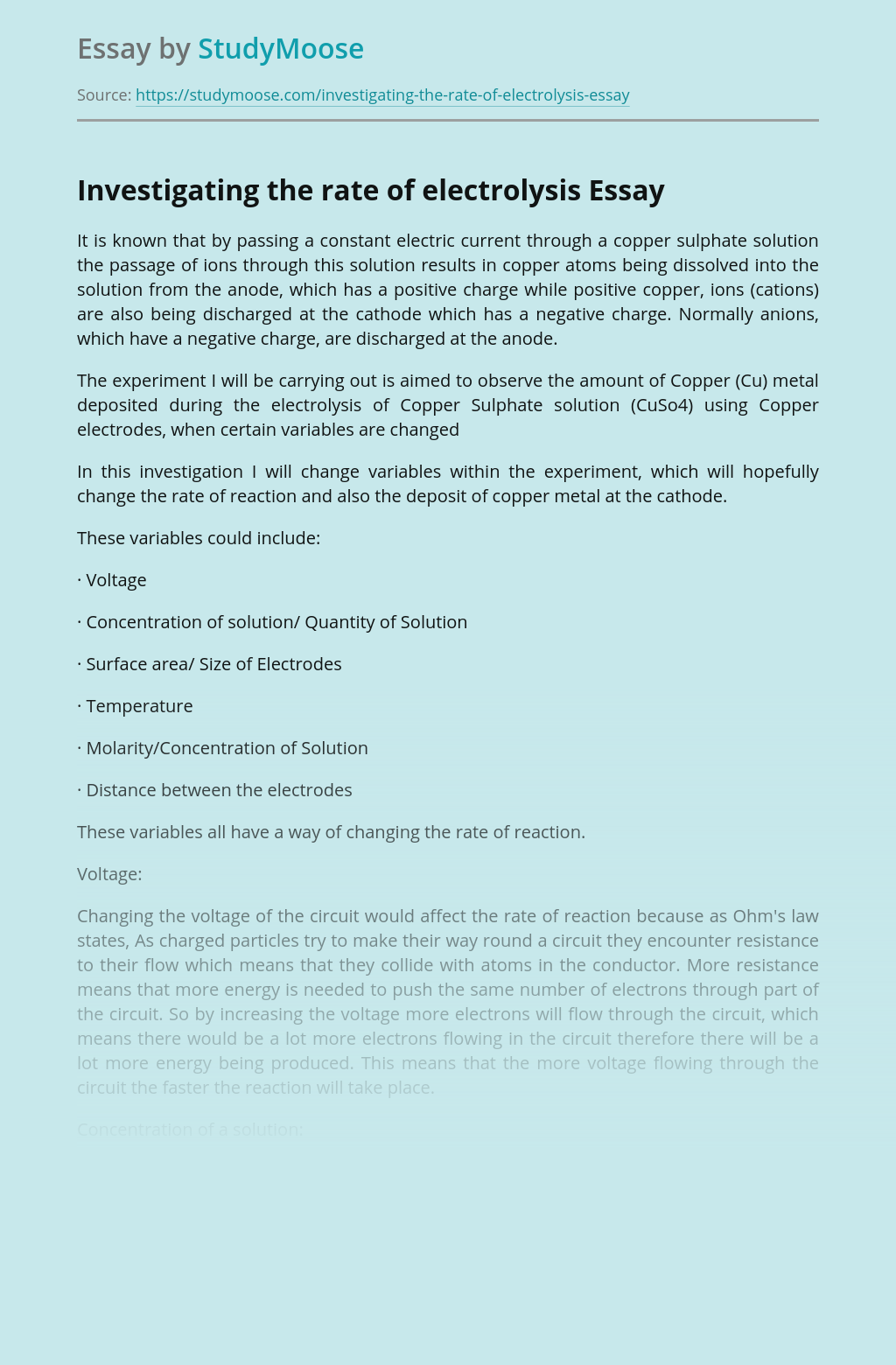 Don’t waste time
Get a verified expert to help you with Investigating the rate of electrolysis
Hire verified expert
$35.80 for a 2-page paper
Stay Safe, Stay Original