Amines are compounds composed of nitrogen atoms bearing alkyl or aromatic compounds. Amines undergo interesting reactions, one of which is with the reaction with nitrous acid producing an azo dye. In this study, the experiment focused on synthesizing an observing the physical properties of Sudan-1. Sudan-1 is of the most common dyes found in waxes, oils and in some food ingredients specifically curry and chilli powder.

Furthermore, this study aimed to understand the mechanism behind the synthesis of 1-phenylazo-2-naphtol. To be able to synthesize Sudan-1, preparation of phenyldiazonium chloride solution and β- naphthol solution were done.

Don't use plagiarized sources. Get your custom essay on
“ Introduction to Organic Chemistry ”
Get custom paper
NEW! smart matching with writer

Ingrain dyeing was also done in this experiment. The synthesis of Sudan-1 has a two-step reaction – diazotization and coupling reactions. Diazotization is the formation of diazonium salt, meanwhile, the coupling reaction took place when an activated aromatic compound, β-naphtol was reacted with the diazonium salt, benzene diazonium chloride, to form the azo compound known as the 1-phenylazo-2-naphthol. As a result, an orange-red precipitate was formed after series of reaction.

Hence, all the said objectives in this experiment were achieved.

Amines are compounds that are composed of a nitrogen atom bearing alkyl or aromatic groups. They are basic and nucleophilic because of their lone pair. They occur both in plants and animals. Amines produces some of the most interesting effects and of the common reaction of aminewith nitrous acid producing a dye[4]. Alizarin, for example is a red dye extracted from madder root used by Egyptians and Persians. However, in this experiment, it aimed to produce a dye commonly known as Sudan-1.

Sudan-1 is a lysochrome with the chemical formula 1-phenylazo-2-naphthol. It is a powdered substance with an orange-red color.

This azo dye is most commonly found in waxes, oils, and also in some food coloring ingredients – curry powder and chili powder. However, the presence of Sudan-1 in most foods now is currently being banned because it has been classified to be carcinogenic. This experiment focused on synthesizing of 1-phenylazo-2-naphthol which is a two-step reaction. The first reaction is the reaction of aniline with nitrous acid, which is called diazotization and second, the reaction of diazonium salt and beta-naphtol to form azo dye which is the coupling reaction.

Rock salt may also be added to the ice bath to maintain the temperature. However, in this experiment, no rock salts were added instead constant monitoring of the temperature was done. β-naphthol solution was used as a coupling reagent in synthesizing Sudan-1. In preparing β-naphthol solution, β-naphthol was dissolved in 5% of aqueous NaOH and was also cooled in an ice bath below 5°C, this was to avoid the decomposition of the compounds. The main reaction that occurred in the preparation of phenyldiazonium chloride solution was diazotization reaction. Diazotization is the reaction between a primary aromatic amine and nitrous acid at cold temperatures to diazonium salt compound.[2] Figure 1 below is the reaction exhibited by the phenyldiazonium chloride solution.

After mixing the phenyldiazonium chloride solution with the β-naphthol solution, an orange-red paste-like solution was formed. Furthermore, the mixed solution was also reacted at a temperature not exceeding 4˚C for 1-5 minutes. Afterwards, the mixture was also filtered was washed with several portions of water to filter the product, Sudan-1.

Recrystallization was also done when the filtrate was steamed bath after dissolving it with 95% hot ethanol. AS a result, orange-red crystals were formed which is the Sudan-1 product. The crystal appeared to be orange-red in color due to the N=N bond present in Sudan-1. The N=N is responsible for the absorption of

light thus reflecting a color which is orange-red. The structure of Sudan-1 is shown in Figure 4 below showing the N=N bond of the compound. The N=N is known as the chromophores which are responsible for the color. The –OH group attached in the structure is also responsible for enhancing the orange-red color. The –OH functional group is known as the auxochrome, which modifies the ability of the chromophore to absorb the light.[1]

The coupling reaction yielded an azo compound which is most commonly known as the Sudan-1 with an IUPAC name of 1-phenylazo-2-naphthol. As a result of the reactions in this experiment, an orange-red color of solution was produced. This experiment aimed to understand the reactions that underwent to synthesize Sudan-1; as a result, figure 3 was the summary of reactions. As a physical result, orange-red colored crystals were produced representing the azo compound, Sudan-1. However, some minor errors will not be ignored in this experiment.

Some errors like human errors might have affected the results in yielding a pure azo compound. One human error, would be the measuring of the reagents used to yield the said product. Also, the misreading of some measurements may have also affected the results of this experiment. Also, some impurities in the chemicals used will also not be ignore, since this impurities may have led to a not so visible side reactions in the said experiment. After being said and done, all the said objectives in this experiment were met. 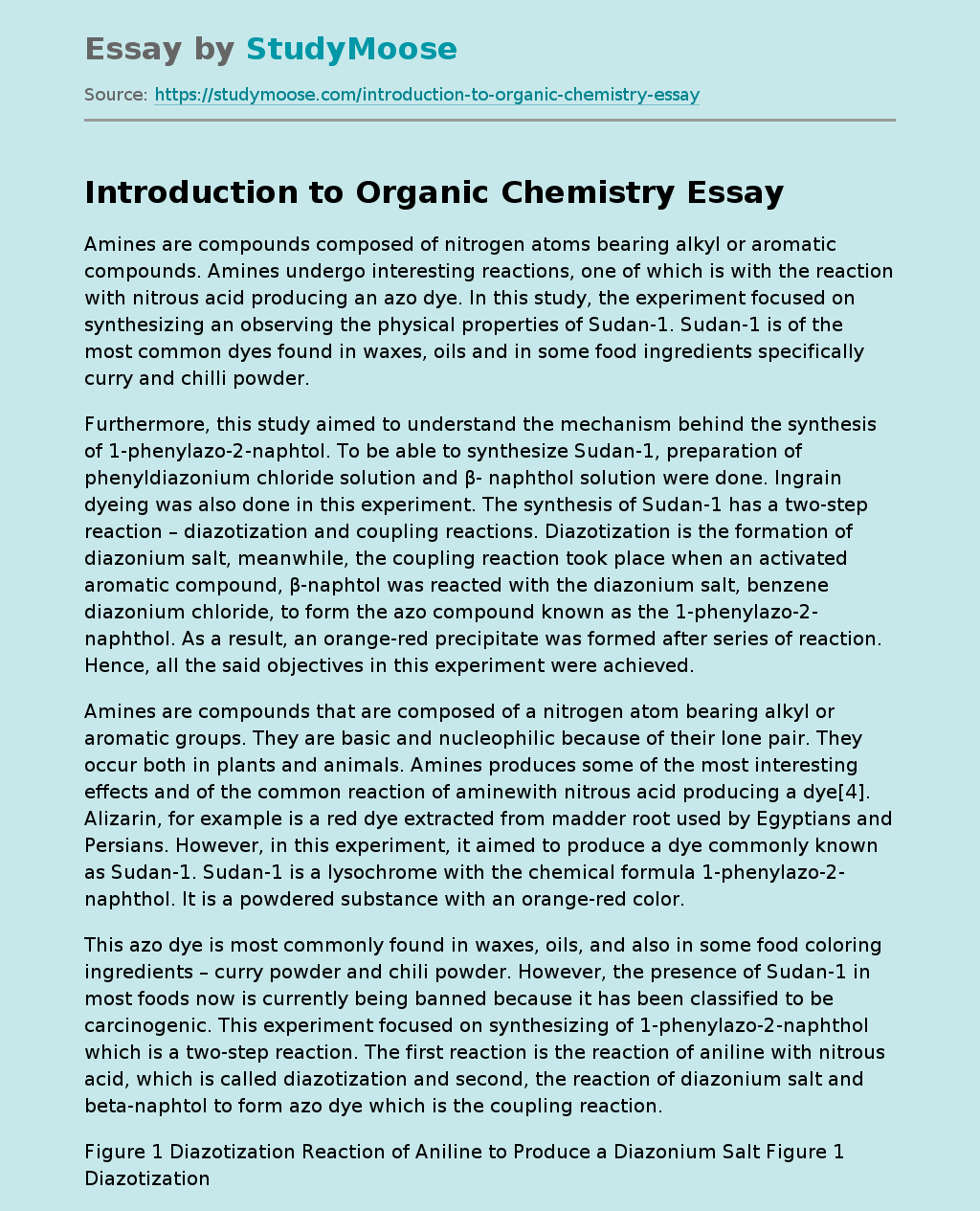