Organic compunds were examined to a comparative investigation to differentiate the properties of each sample. The physical state at room temperature, odor and color of the sample were noted by simple observation. In terms of solubility in H2O, 5% NaOH solution and 5% HCl solution, the samples were classified as to miscible, slightly immiscible or immiscible for liquid; and very soluble, soluble, partially soluble or insolubse for solid. The samples also underwent a test using litmus paper to classify its acidity, basicity or neutrality.

Turn in your highest-quality paper
Get a qualified writer to help you with
“ Comparative Investigation of Organic Compounds ”
Get high-quality paper
NEW! AI matching with writer

The next procedure was the ignition test, which classified the sample as to whether the sample was flammable, or non-flammable and the color of the flame were noted. After going through all the tests, it was proven that organic compounds possess different properties.

Hydrogen, nitrogen, and oxygen atoms are the most common atoms that are generally attached to the carbon atoms. Each carbon atom has 4 as its valence number which increases the complexity of the compounds that are formed. Since carbon atoms are able to create double and triple bonds with other atoms, it further also raises the likelihood for variation in the molecular make-up of organic compounds. [1] Carbon can also bond with itself and hydrogen to form both chains and rings called hydrocarbons. Because the covalent bond between carbon and hydrogen is nonpolar, these carbon skeletons are hydrophobic.

The chemical properties of a molecule determine how it interacts with other molecules and the role the molecule plays in the cell. Some functional groups are hydrophobic and others are hydrophilic. [2] Hydrocarbons are the simplest class of organic compounds and are composed solely of hydrogen and carbon. This class can be further divided into two groups: aliphatic hydrocarbons and aromatic hydrocarbons. Aliphatic hydrocarbons can be classified based on the structure and bonding of the carbon skeleton into three groups: alkanes, alkenes, and alkynes. Aromatic hydrocarbons or arenes, which contain a benzene ring, were originally named for their pleasant odors. These compounds possess special properties due to the delocalized electron density in benzene, including additional stabilization due to the system of conjugated rings consisting of unsaturated bonds, lone pairs, and empty orbitals. [3] Organic compounds have different properties. They may vary in their physical state at room temperature, color, odor and solubility in different reagents. The experiment aims to differentiate organic compounds in terms of: certain intrinsic physical properties, solubility in different solvents and behavior towards ignition. [4]

Physical State, Color and Odor
The physical state of the sample was observed at room temperature. Then, the color was noted and with a wafting motion, the odor was described.

If the water is soluble in water, the aqueous solution was tested with red and blue litmus paper. The color changes in both litmus paper was noted. Ignition Test
Three to five drops of the liquid sample was placed in a small evaporating dish and then was lighted with a match. If the sample is solid, a pinch amount was used. The sample was observed if it is flammable or not. The color of flame produced was noted. Results and Discussions

Observation of Physical State at Room Temperature, Color and Odor of Samples

As shown in the table, most of the hydrocarbons are clear. The result of the experiment showed that Phenol becomes red upon oxidation and white crystals for benzoic acid. The odors of the compounds are quite similar to each other but still have different identity. Cyclohexane and DCM both have paste-like odor. Ethanol smells like alcohol while benzoic acid is odorless. Ethyl acetate has plastic balloon odor while ethylamine has urine odor or can be ammoniacal odor because of its functional group, amine.

Test for Solubility Properties of Sample in H2O, 5% NaOH solution and 5% HCl solution

The solubility properties of organic compounds using H2O, 5% NaOH solution and 5% HCL solution indicates whether the solid sample is soluble or insoluble and if the liquid sample is miscible and immiscible. Solubility of sample to the solvent is related to polarity of the two substances and the intermolecular forces of attraction during the solution process. The “like dissolves like” principle is involved. Water is a polar solvent so the sample that is soluble or miscible with water is also polar. Based on the results, ethanol, phenol, ethyl acetate and ethylamine are polar compounds. The solubility in 5% NaOH solution of a water insoluble sample is an indication that acidic functional group is present. Compounds that behave as bases in aqueous solution are detected by their solubility in 5% HCl solution. [5]

As shown in the table, phenol and ethyl acetate are acidic while ethylamine is basic. Ethanol is a neutral sample. Cyclohexane, DCM and benzoic acid were not subjected to the litmus paper test because of their immiscible property with water. D. Ignition Test

Table 4. Degree of Luminosity of the Samples

Incomplete combustion is indicated by a yellow flame (luminous) and there is much light than heat; the carbon is not completely oxidized. 2C2H2 + 5O2  4CO2 + 2H2O + heat
Based on the table, cyclohexane, phenol, ethyl acetate and ethylamine are flammable with luminous flame while ethanol with non-luminous flame. DCM and benzoic acid are both non-flammable

Comparative Investigation of Organic Compounds. (2016, May 15). Retrieved from https://studymoose.com/comparative-investigation-of-organic-compounds-essay 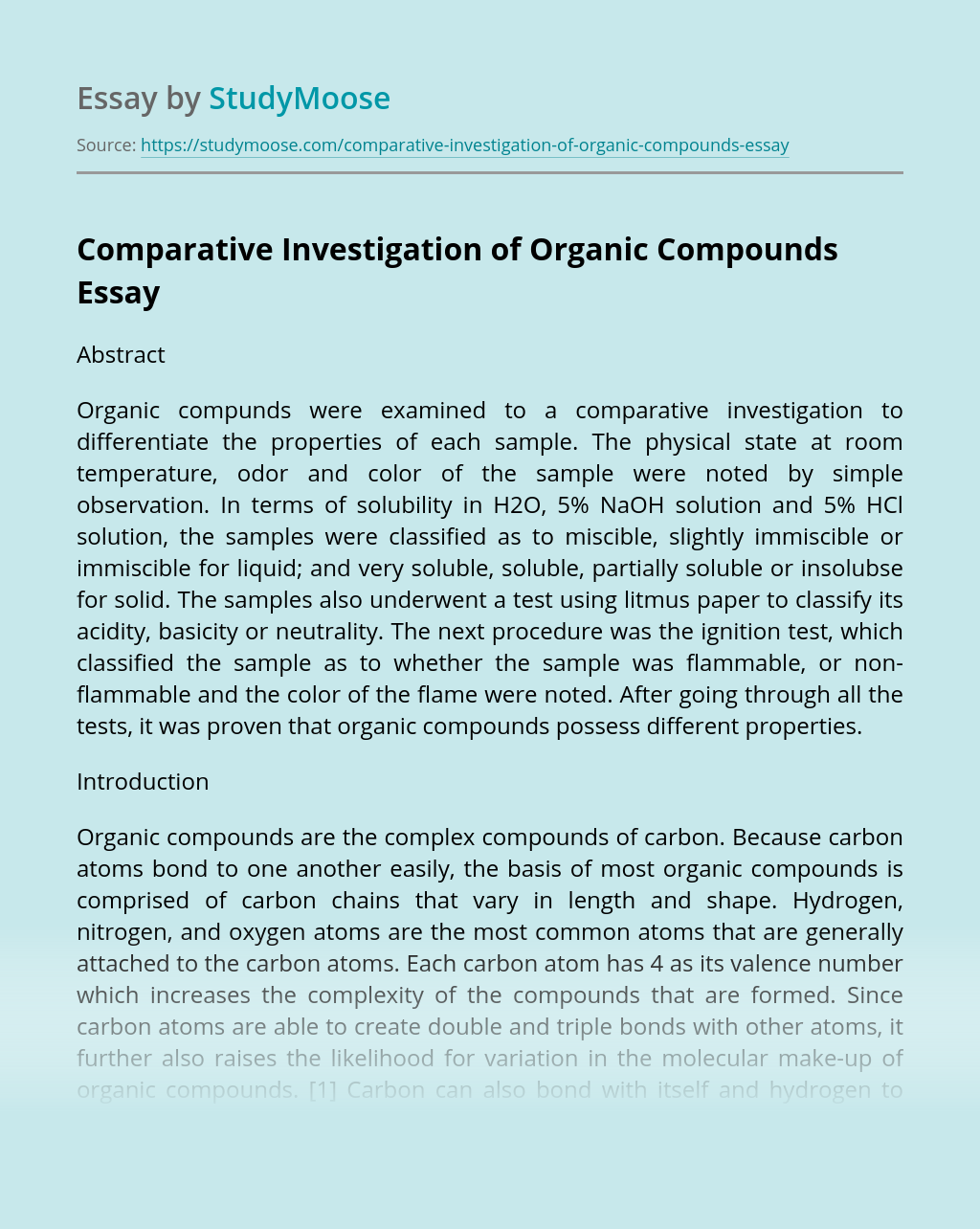 Turn in your highest-quality paper
Get a qualified writer to help you with
“ Comparative Investigation of Organic Compounds ”
Get high-quality paper
Helping students since 2015
Stay Safe, Stay Original