Separation and Purification of Organic Compounds

The distillation process was successfully done because of the separation of water from the acetone. When the distillate was lighted with the matchstick it produced flame which indicates that there was more presence of acetone than water. When the sodium nitroprusside, sodium hydroxide and glacial acetic acid was added to the distillate, it turned to violet. This means that there is the presence of ketone.

Distillation is the process heating a liquid until it boils, then condensing and collecting the resultant hot vapors.

Don't use plagiarized sources.
Get Your Custom Essay on Separation and Purification of Organic Compounds Just from $13,9/Page

The resultant hot vapor passes into a condenser and is converted to the liquid, which is then collected in a receiver flask.

The other components of the mixture remain in their original phase until the most volatile substance has all boiled off. Only then does the temperature of the gas phase rises again until it reaches the boiling point of a second component in the mixture.

The objective is to separate and purify organic compounds.

A 50 mL of a mixture containing 25 mL of acetone and 25 mL of water was placed in a distilling flask. Three pieces of porcelain chips was added to prevent bumping that was produced by a constant stream of bubbles which keeps the liquid in movement. The distillation set-up was prepared by the students. Before proceeding to the next step, the instructor must approved the said set-up.

Figure # 1: Schematic Diagram of the Procedure

When acetone, water, and pocelain chips were placed in the distilling flask while heating, the acetone evaporated at 60oC and the water at 100oC. The distillation process was formed when the water vaporized and separated from the acetone. When the water was vaporized, the vapor is led in the condenser. Upon cooling, the water returned to the liquid form and run into a receiving container while the acetone remained on the other container. After putting three drops of distillate in the evaporating dish, it was ignited and it produced flame.

Separation and Purification of Organic Compounds. (2016, Mar 30). Retrieved from https://studymoose.com/separation-and-purification-of-organic-compounds-essay 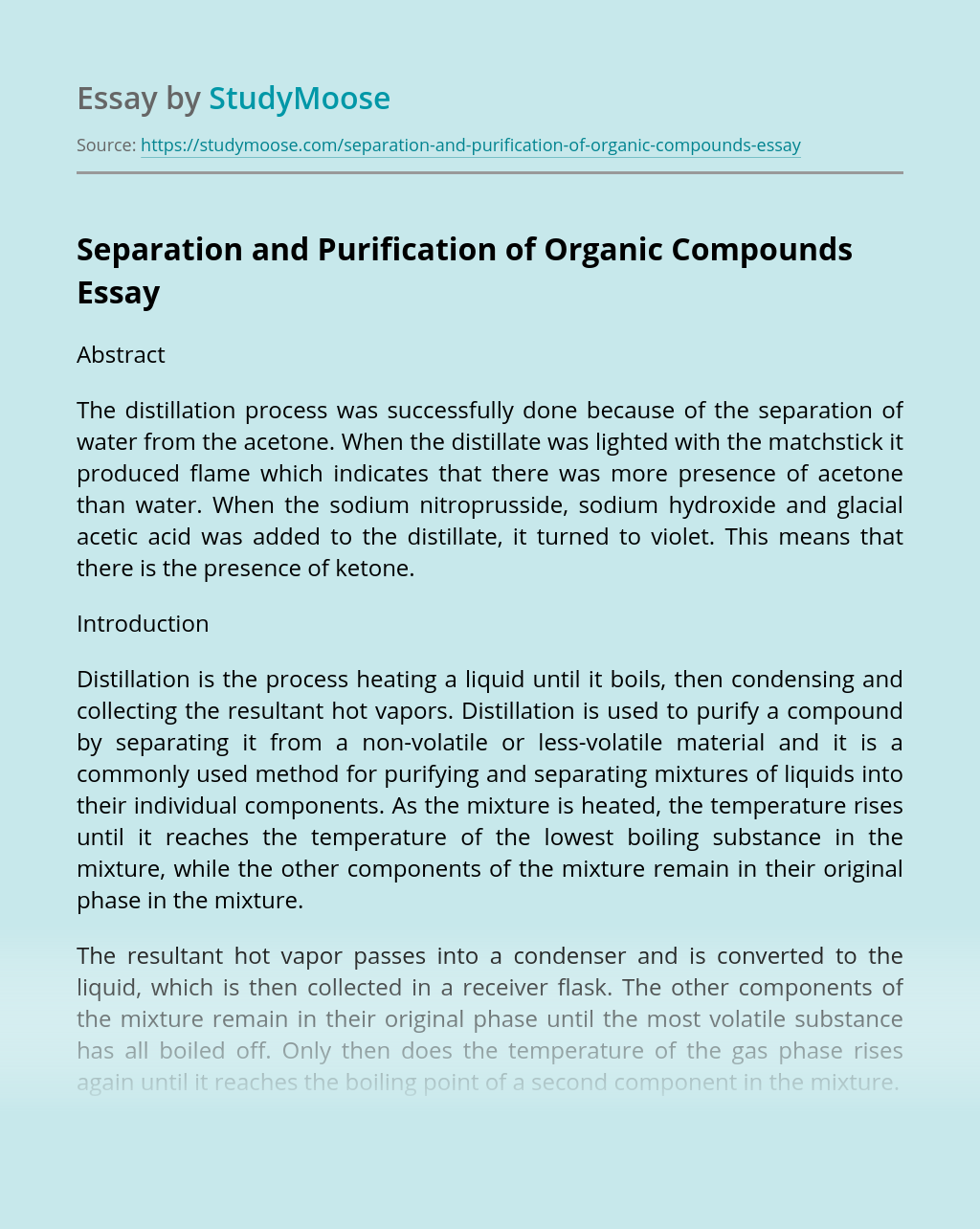 How does Shakespeare present love in 'A Midsummer Night's Dream'?

Shakespeare uses many different themes to present love; relationships, conflict, magic, dreams and fate. Overall, he presents it as something with the ability to make us act irrationally and foolishly. Within A Midsummer Night’s Dream we see many examples of how being ‘in love’ can cause someone to change their perspective entirely. ‘The path of...

Computers in Games and Sports Practically everybody has played sports video games on a computer. It’s fun to pick a team and see how well you can play against a “virtual” rival. However, the uses for computers in various games and sports go far beyond video games. If you ask a cricket bowler how he...

Imagine a life with no hamburger or milk. How would this make you feel? Do you think you would be able to survive? I know I wouldn’t be able to. Both milk and red meat are important in a daily diet. These two items come from cattle. Cattle and beef in general are a necessity...

Have you ever looked at the West Elk mountains and seen the lamb in the side of Mt. Lamborn? The reason it is called that is because of the sandy slide that resembles a sheep much like the Cantabrian mountains of Spain resemble white elephants. “Hills Like White Elephants” (1927), written by Ernest Hemingway, is...

One Of The Earliest operating systems for personal computing machine WAS The Windows Produced by Microsoft. The First Of The operating system version WAS released on November 20th, 1985 ( Microsoft Windows History, 2008 ) , “ under the name of Windows 1.0. Originally, Microsoft wanted to name The Pioneer operating system “ Interface Manager...