The Benefits of Organic Food to Human Health

Organic refers to the way agricultural foods is produced and processed. It is using methods and materials that are of low impact to the environment. And the primary goal is to optimize the health and productivity of interdependent communities of soil life, plants and people. Research published in a 2001 study showed that the current fruit and vegetables that are conventionally grown in the United States have about half the vitamin content of their counterparts in 1963. The study was based on a comparison of published USDA figures.

Produced in organic farm, organic food is grown under government supervision. Therefore it is healthier for the environment which it is produce with an organic farming method that are less disruptive to the ecosystem and less dependent on chemical. . In today society, people are always in search of factors that give them an edge in maximum their health. As we all known a healthy diet and appropriate rest all has an impact on our health.

Therefore there has been an overwhelming group of people that believe the benefits of organic food.

Many people purchase organic food because it contains more nutrient than conventionally grown food. It’s true there have been more than a hundred studies comparing the nutrient content of organic and non-organic foods. Official food composition tables, including data compiled by the US Department of Agriculture, reveal that since the 1940s the mineral levels in fruits, vegetables, meat and dairy have declined substantially in conventional foods. Combine this with longer storage, and more processing of crops and it’s not surprising that we may be getting fewer nutrients in our food than we were 60 years ago.

The artificial fertilization associated with conventional crops produces lush growth by swelling produce with more water. On a pound-for-pound basis, organic food has more “dry matter” (i. e. iron). We can expect also that phytonutrients, which are antioxidants involved in the plant’s own defense system, will be higher in organic produce because crops rely more on their own defenses in the absence of regular applications of chemical pesticides. Evidence is emerging that confirms this expectation. Higher levels have so far been found of lycopene in organic tomatoes, polyphenols in organic potatoes and flavonols in organic apples.

A recent review of the subject estimated that organic produce will tend to contain 10-50% higher phytonutrients than conventional produce. ( Mark Jeantheau,2005) Partly because of this and for other reasons too, there are higher levels of nutrients in organic produce. Research by American nutritionist Virginia Worthington has confirmed that, based on the dietary patterns, the differences can be enough to help you achieve certain nutrients that you otherwise might not get. Despite of improve a person nutrient level intake, organic food also has a lower pesticides residue.

A Consumer Union report found that fresh peaches, frozen and fresh winter squash, apples, grapes, spinach, pears, and green beans had some of the highest Toxicity Index ratings. (Edward Groth III,February 1999). However conventional-food provider also claims that pesticide residues are no threat to human health. Yet consumers intuitively know this is a false assurance. In 1999, the EPA (Environmental Protection Agency) estimated that nationwide there were at least 10,000 to 20,000 physician-diagnosed pesticide illnesses and injuries per year in farm work.

Exposure to pesticides can cause a range of ill effects in humans, from relatively mild effects such as headaches, fatigue, and nausea, to more serious effects such as cancer and neurological disorders. (U. S. General Accounting Office, GAO-01-815, Page 4, August 2001). Researchers have linked symptoms such as headaches, tremor, and lack of energy, depression, anxiety, poor memory, dermatitis, convulsions, nausea, indigestion and diarrhea with dietary intakes of pesticides.

It also has claimed that women diagnosed with breast cancer are six to nine times more likely to have the pesticides DDT or hexachlorobenzene in their bloodstreams compared to women who did not have breast cancer. Organic food also has no harmful and less food additives. Antibiotics, growth promoters and other additives are added to non-organic meat during the animal’s life and while the meat is prepared for consumption. Normal intensive farming methods mean that animals live in overcrowded, unhealthy conditions where disease would quickly spread through the herd where antibiotics not used.

Although antibiotics are still used to treat organically reared animals, the healthier living conditions of the animals mean that antibiotics are used prudently to treat specific ailments, rather than as a preventative method. Once the animal has been slaughtered and the meat is being prepared for human consumption, additives are often added to it to improve the flavour, colour or texture of the meat, or to make it stay fresh longer. (T. H. Carson,2005). Organic food producers are prohibited from using additives that research has shown may be harmful to human health, such as sulphur dioxide or artificial colourings.

But as our organic meat is reared more naturally, the meat has its own natural flavour, texture and colour, and does not need any artificial enhancers! Besides that, children also need organic food the most as children’s are generally fast on developing organs, brains, and detoxification, however weak on immune systems. Children also have a large intake of food per kilo of body weight. Children may be at risk of higher exposure to the toxins found in nonorganic food because the food is often made up of condensed fruits or vegetables, potentially concentrating pesticide residues.

Pesticides pose special concerns to children because of their high metabolisms and low body weights. More than 1 million children between the ages of 1 and 5 ingest at least 15 pesticides every day from fruits and vegetables. More than 600,000 of these children eat a dose of organophosphate insecticides that the federal government considers unsafe, and 61,000 eat doses that exceed benchmark levels by a factor of 10 or more. “(Ranchers and Foresters,1998, pp. 1-3. ).

Meanwhile, artificial colorings and preservatives in food and drink are thought to contribute to hyperactivity in pre-school children, and while many still contest this issue, a recent study in the UK found that the proportion of hyperactive children was halved when additives were removed from their diets. Many additives such as preservatives, artificial sweeteners, colorings and flavorings, MSG, hydrogenated fat, and phosphoric acid are prohibited in organic food production. As a conclusion, it is so important that the organic food benefits be made aware to the people as it offers a lot of good benefits to human health.

Many people usually wonder why there are so many diseases these days. Therefore, making a commitment to organic food means making a commitment to your health. Organic food is how food’s supposed to be, a valuable part of any regimen intended to maintain, improve, or restore health. Although there are many different benefits that we can get from the consumption of organic food, the most basic organic food health benefit that we get is pure, clean fruits, vegetables and other foods and a lot more healthier.

The Benefits of Organic Food to Human Health. (2017, Apr 06). Retrieved from http://studymoose.com/the-benefits-of-organic-food-to-human-health-essay 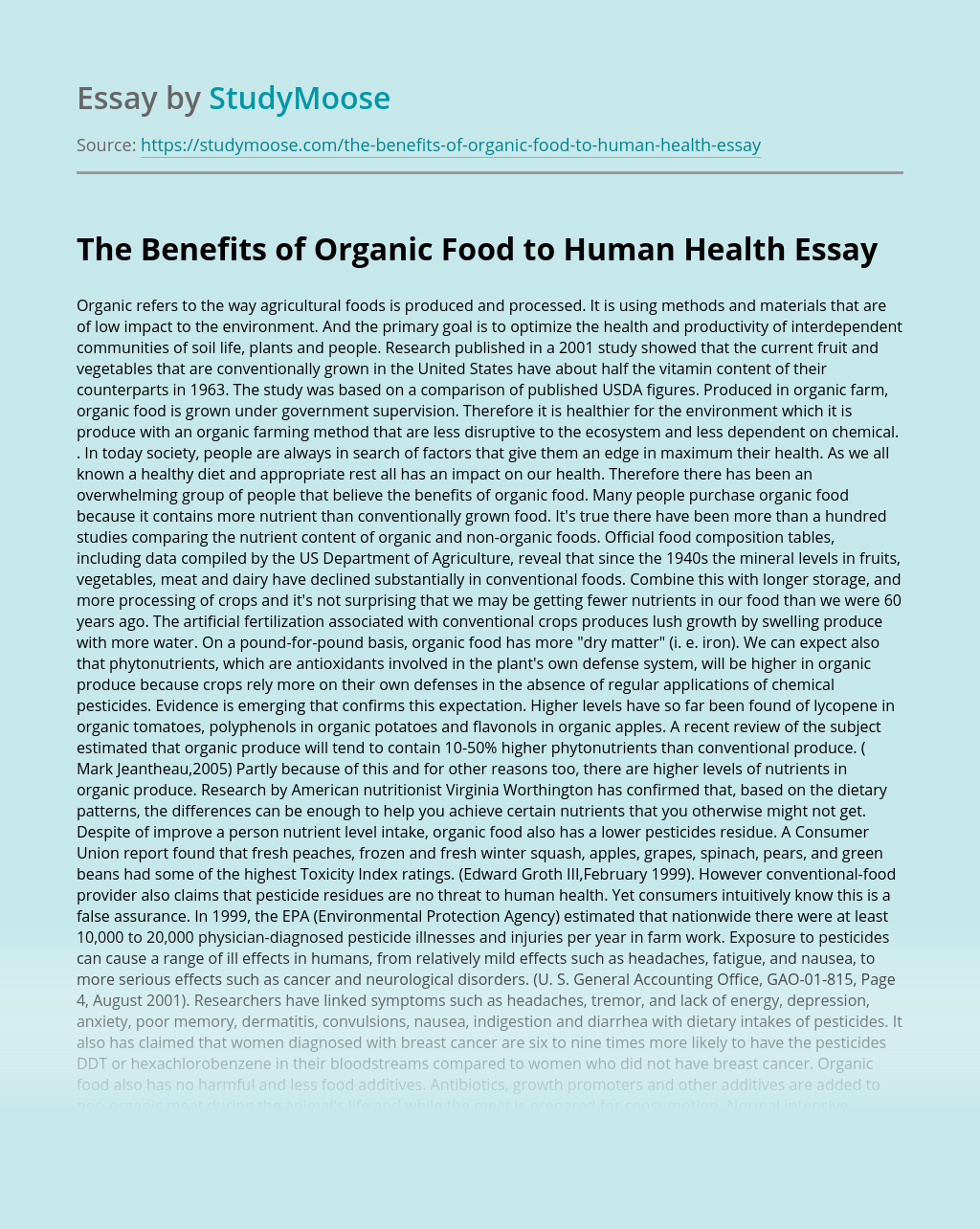 Don’t waste time
Get a verified writer to help you with The Benefits of Organic Food to Human Health
Hire verified writer
$35.80 for a 2-page paper
Stay Safe, Stay Original