The only way to reduce the amount of traffic in cities today is by reducing the need for people to travel from home for work, education or shopping. Nowadays traffic is a major problem in Kuwait. If we make some effort to reduce the amount of traffic then a pollution free and comfortable living will be created. With the development of science, now everything is possible in the world.

Computers are one of the most important inventions of science, so that now we can reduce traffic by using computers, even though Kuwait public transportations isn’t that good and the citizen don’t use them at all that has to be changed and make the people use buses and all sort of public transportations and by setting a law that inquire the buyer to pay taxes with the car.

Don't use plagiarized sources.
Get Your Custom Essay on Traffic congestion in Kuwait Just from $13,9/Page

The last problem is at the morning of every weekdays the people face traffic jam which caused by school busses or the parents who dropping off the students.

Most of the people prefer e-education, e-shopping and working from home.

All these are possible nowadays by using computers with net connectivity. Traffic can be reduced if people reduce their travel from home to work, education or shopping. But I would like to say that is one way, but not the only way to reduce the amount of traffic. In Kuwait, if everybody uses their own car and other huge vehicles then traffic will increase. The government should prioritize transportation to ease people’s movement from one location to another Kuwait is currently facing serious traffic problems that have been adversely affecting individuals, groups, companies and the national economy in general.

Today fuel prices are going up day by day. Reducing the use of the automobile is a good way of saving money. In my view, roads and highways should be good to reduce traffic. In India I have seen many cities in which traffic is a major problem. Bangalore is one of them. Bangalore has no good highways and roads. Therefore people get stuck in traffic jams and do not want to live in Bangalore. So if we do not want to get stuck in traffic jams, roads should be good and broad. I like the roads and highway system of the U. S.

In the U. S. there is no problem with traffic jams and people enjoy driving. In Kuwait the government should include and increase the taxes on vehicles. If people really have a necessity for a vehicle then they can purchase it, otherwise not. A traffic jam is directly related to the number of vehicles in Kuwait. Development of the country should not be in only one city but distributed all over the country. By distribution of development we can distribute the traffic equally. I think it will be good in the long run as well.

And my last problem but not least is that the main Couse of traffic jam is that at the morning both workers and student go out at the same time which causes rush hours that may maintain for 2-3 hours which can make u as an employee or a student being late, and what it should have been is to change the school time and work times make them at least 2 hours in between, so either the worker or the student whenever they go out they wont get stuck as many hours if they were out at the same time.

So in my opinion, if we really want to reduce traffic in cities then we should encourage people to use public transport. People will feel better if they live in a good and comfortable environment. 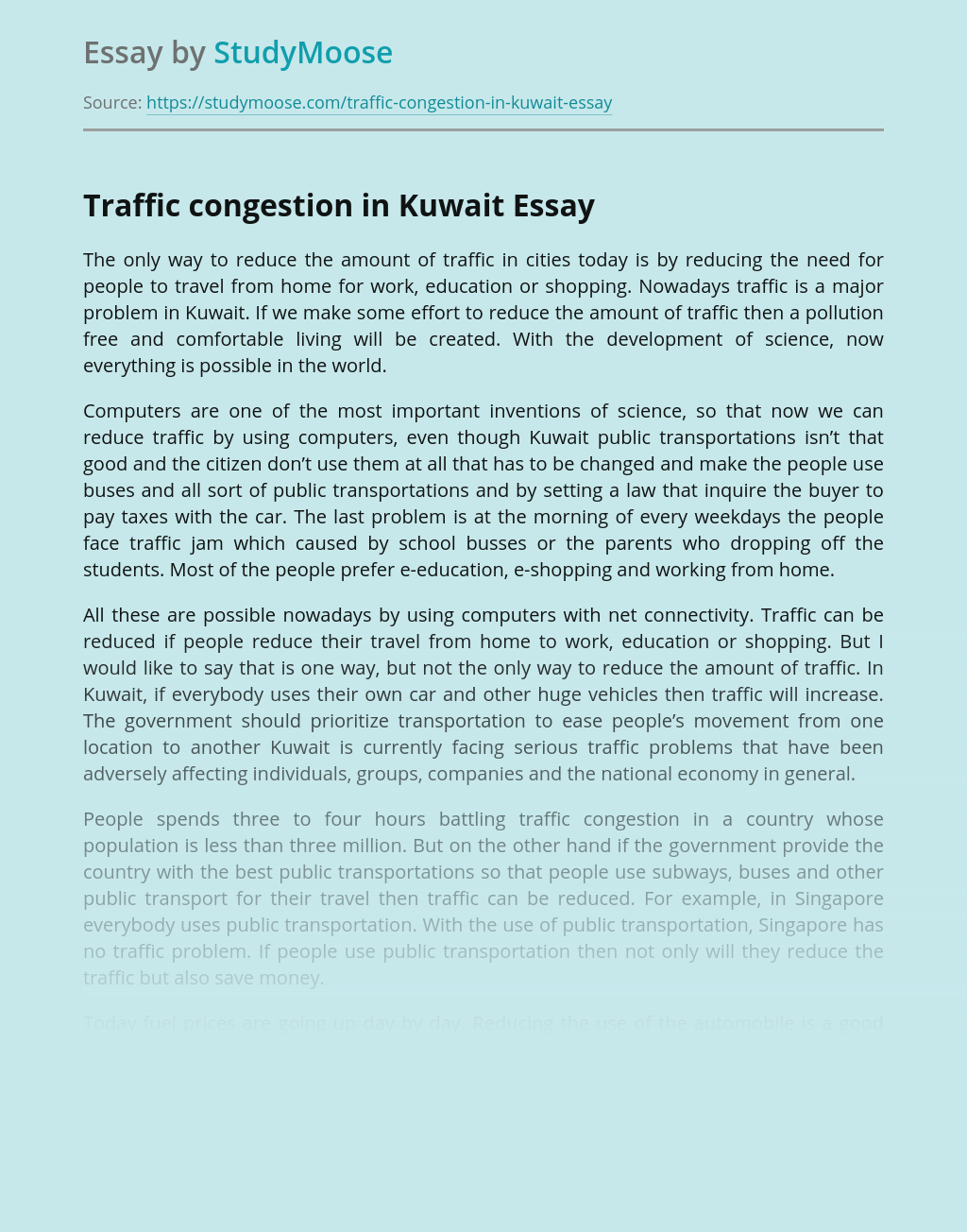 A trip on the general public city transit bus is typically an uncomfortable expedition. For some, the transit bus system is our only methods of transportation. Consequently, public bus travelers are exposed to various unfavorable conditions. This paper will depict those unpleasant scenarios experienced on the public bus. Public transport, such as the city bus,...

When thinking of traffic, I have actually an amusing imagination of circulatory system. We need circulatory system to pass nutrients, blood cells, hormonal agents through the human body, so does with the traffic. Traffic is one of the most crucial thing that every countries need to pay much issue. And traffic in Viet Nam, what...

Get Essay
Intermodal Connectors with Freight Movement, Analysis and Infrastructure

Today, policymakers are very concerned about the inflows and outflows of commerce at the U.S. cargo hubs. There appears to be a serious issue with flows and recent studies carried out by the Department of Transportation have found that freight transfer facilities are seriously afflicted with traffic bottlenecks and problems while attempting to access freight...

Individuals The website provides lot of information and services that are useful for the individuals when they want to ship their mails, packages across the country or worldwide. For example if an individual wants to deliver a parcel immediately without going to UPS and this would be the right solution for the individual to use...