The Role of Women in “Hamlet”

As in many biblical stories, history has proven time and time again that it is women who have always corrupted humanity. Ever since the shift from the ancient societies women have been depicted in a negative light though out many different stories. Women have been depicted as the race that has ruined innocents and corruption in religion. Whether depicted as innocent or conniving, women always seem to corrupt man through different methods. It is as inevitable as death. Shakespeare’s “Hamlet” is no exception to this bad portrayal of women.

Don't use plagiarized sources. Get your custom essay on
“ The Role of Women in “Hamlet” ”
Get custom paper
NEW! smart matching with writer

Though they may seem non-knowing of all the corruption around them, women are still responsible for the corruption throughout the play. Gertrude and Ophelia are both manipulative characters that convince men around them to change and ultimately become the motivation for all of the tragic events throughout the play. Despite the general opinion that “Hamlet” contains the weakest women in Shakespeare’s works, the revealing of the main plot can only be given credit to the women.

The first case in which we see woman as the catalyst of the play is with Gertrude being one of the main motivations for Claudius murdering his brother.

Once Hamlet died, Claudius and Gertrude quickly exchanged wedding vows, maintaining the power of Denmark during the unexpected death of King Hamlet. Hamlet continuously says that he knows what Claudius has done, and seeks to make him feel guilty for his actions. He achieves this goal through a reenactment of Hamlet’s death, and the exchange of everlasting love between the couple.

After this incident, it is Claudius that leads him to profess his true intentions to the reader about his motivations for killing his brother. Claudius confesses, “I am still possessed, of those effects for which I did the murder, My crown, mine own ambition, and my queen.” (III, iii, 57-59). Claudius clearly states that one of his three main purposes to kill his brother was Gertrude, therefore it was Gertrude’s influence, whether she was aware of it or not, that lead to Claudius’ corruption as well as Hamlet’s death. Hamlet’s unexpected death is the point to the whole play, if it were not because of Gertrude, the first domino would not have fallen and given cause to the following sequence of events.

It was she that corrupted Claudius, giving him blind ambition and the desire to steal the crown from his brother. Gertrude cannot be blamed for the death of Hamlet, but she can be blamed for the seduction, and eventual corruption, of Claudius, which led to Hamlet’s death. Gertrude also allowed Claudius to marry her, allowing him to completely achieve his ambitions and secret desires. Another example in which a woman continues the chain of events is when Gertrude is stated as Hamlet’s ultimate motivation for avenging his father’s death. After Hamlet’s father appeared to him, it was clear what he had to do in order to restore his own honor, and ultimately the honor of his family. Claudius and Gertrude had disgraced both Hamlet and his father, but Hamlet’s main motivation to continue the corruption was his mother. She introduced the Oedipus idea as well as many others, but through his own analysis he came to the conclusion that Hamlet suffered from that specific disease. The Oedipus idea is simply defined as the natural attraction that a son has for his mother, and the natural competition that he has with his father, or for Hamlet now, Claudius.

It is Gertrude’s actions that challenge and irritate her son in such a way; initially Hamlet states, “She married, O, most wicked speed, to post with such dexterity to incestuous sheet! It is not, nor it cannot come to good. But break, my heart, for I must hold my tongue.” (I, ii, 161-164). Hamlets ‘heart breaking’ is telling of his love for his mother, and of his jealousy. This idea suggested that Hamlet’s guilt for desiring the same as his uncle is what held him back, but instead it could be interpreted that he did not feel guilt for desiring his mother, but instead for having desired to kill his father as well. Hamlet’s realization that he is no better than his uncle is what prevents him from killing his uncle on the first try. Hamlet then states that he would rather kill his uncle when he is tainted with sin, but specifically during, “th’incestous pleasure of his bed” (III, iii, 95). Hamlet plans to wait for the moment when he is the most jealous and most enraged in order to kill Claudius. By using his mother as his ultimate motivation, he is allowing her to corrupt him as well, by committing one of the most primal sins.

Another instance of when a woman is responsible for the unraveling of the main plot is with the other main female character, Ophelia. It is Ophelia who ultimately motivates Laertes into avenging her death, and becoming Claudius’ tool. Ophelia has become mad after her several encounters with Hamlet’s insanity as well as because of the unexpected death of her father. Laertes had never seen eye to eye with Hamlet, and persistently told her sister that she should be cautious when she was with him. Her father and her brother both agreed with each other, but Laertes did not take any action until the fifth act. As the gravediggers finish digging, and Ophelia and her mourners arrive, Hamlet and Horatio are hiding and observing the scene. As soon as when Hamlet finds out that the burial is for Ophelia he jumps out and proclaims, “What is he whose grief/ bears such an emphasis, whose phrase of sorrow/ conjures the wand’ring stars and makes them stand/ Like wonder-wounded hearers? This is I, / Hamlet the Dane.” (V, i, 268-271). Hamlet claims that he mourns Ophelia’s death above all others, and almost seemingly challenges Laertes’ mourning. Laertes reacts violently towards what Hamlet said. It is the disgrace of her sister that is the ‘final straw on the camel’s back’.

She is his last, and most vivid motivation for killing Hamlet and following through with Claudius’ plan. Ophelia is the motivation for the fight between Hamlet and Laertes, which leads to the death of the Queen, Laertes, Hamlet, and Claudius. Even though Gertrude and Ophelia do not represent the strong, smart, and devious stereotype of a woman from Shakespeare they still are responsible for every tragedy throughout the whole play. Without these two main characters the main plot would not have unfolded and the argument and deception between the characters would not have become so violent so quickly.

Throughout literature women have been depicted as the temptress of man, conniving, and ultimately evil, but literature has also left it clear that without women there would be nothing to the story line, no drama would be inflicted on the characters, because without women men would not fight for a woman attention or listen to the conniving ideas to get her way with the world though deceiving acts. The two-dimensional portrayals of characters would not have a strong meaning without the passion and love that woman inspires in the heart of every good man. Whether in literature or real life actions the image of women has just began to be portrayed in a different light, one that the woman are innocent and can look weak, but still the things that happen in the story are because of their actions.

The Role of Women in “Hamlet”. (2016, Jun 11). Retrieved from https://studymoose.com/the-role-of-women-in-hamlet-essay 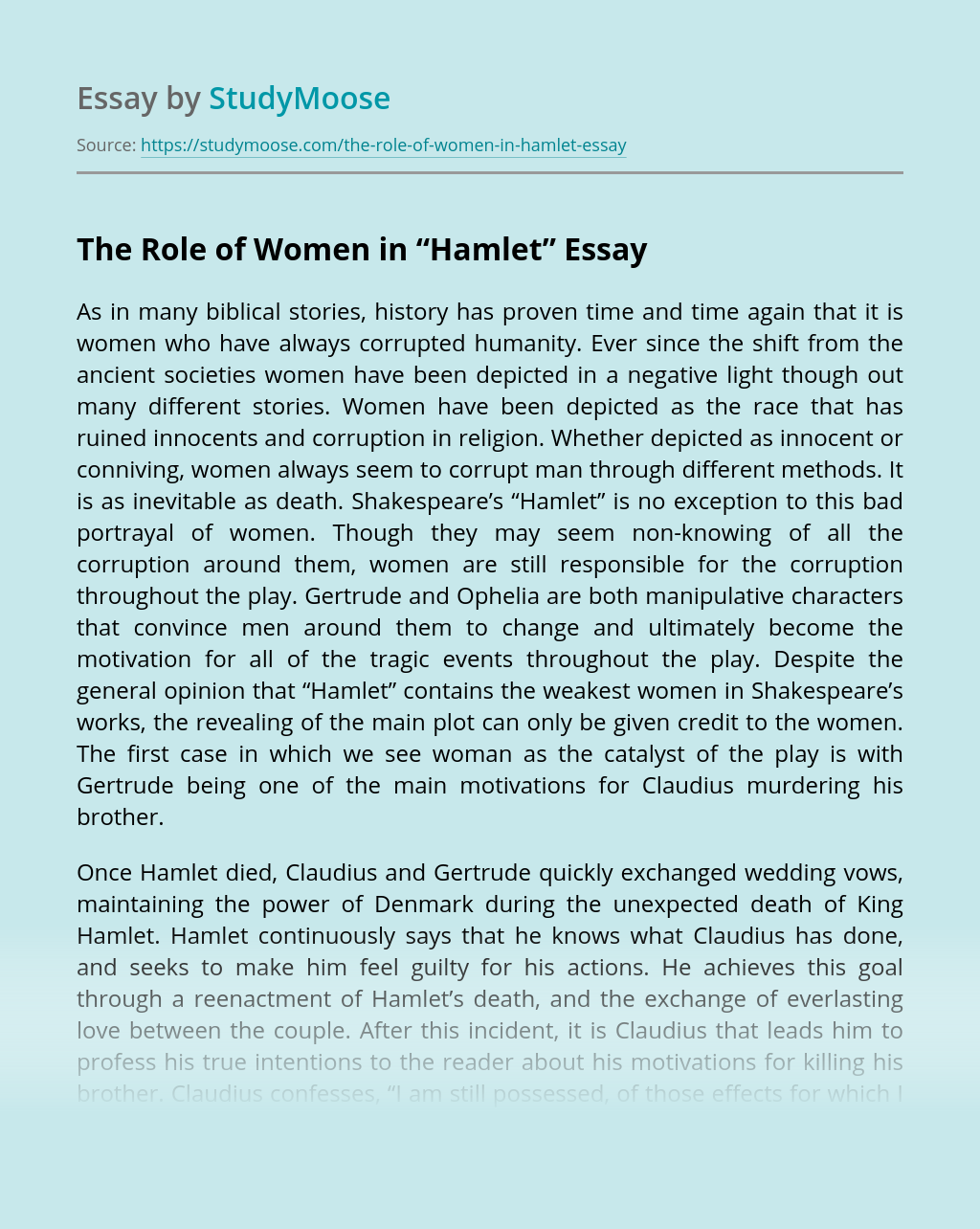