In Hamlet, the women act the small roles portraying their historical status at the time. Although Gertrude is the Queen of Denmark and Ophelia is the prince’s lovers, they have no standing in the society and their voices are never heard. Their actions and fates are greatly influenced by the men’s decisions. All their lives Ophelia and Gertrude are led by the men’s power; they together make a weak image of dependent women at Shakespeare’s time.

Although Gertrude and Ophelia are not well developed through out the play, their actions, language and influence on the play portray them as the obedient passive type of women.

Don't use plagiarized sources. Get your custom essay on
“ Gertrude and Ophelia (Hamlet) ”
Get custom paper
NEW! smart matching with writer

Gertrude is Hamlet’s mother, a queen who betrayed her husband and got seduced by the prince’s uncle Claudius. She remarried with him and thereafter obeyed every order from Claudius. Gertrude is objectified by Claudius, as he said: “my crown, mine own ambition and my Queen.” To him the queen is one of his possessions and not even listed as the first.

This suggested Gertrude is used by Claudius to get to the throne. The hasty marriage only a few weeks after her husband’s death shows her great dependence on men. Hamlet’s proclamation that he will “speak daggers to her, but use none” illustrate that he perceives her to be inferior, weak enough to fall foul to his words. Overall, Gertrude is the type of women that cannot survive without a man in her life, with such a weak soul she betrays her own husband and son.

Ophelia is different from Gertrude. She is innocent, and naïve with no experience in life. She does love Hamlet with her pure heart, but she is also too submissive to her dad Polonius and brother Laertes. As they claim Hamlet is dangerous, that Hamlet’s “will is not his own” and that she should “fear” him, she does not try to oppose him, or justify Hamlet’s “affections” instead she tells Laertes that he “shall keep the key” of her memory. Polonius insults her and Hamlet’s love, responding to her declaration that Hamlet “has of late made tenders of his affection” he cries “Affection? Pooh!…Do you believe his tenders as you call them?” to which Ophelia replies “I do not know, my lord, what I should think”.

She gives all the other male influences in her life. Later in the play, after Hamlet killed Polonius and runs away, Laertes is in France, she has no one to turn to. She depends too much on those people, now without any support she turns to madness and finally commits suicide. All her life Ophelia is led by others and has never decided anything but her death.

“Hamlet” was written in a time when women were not even allowed to play themselves on stage, women were seen as inferior and women were ‘owned’ by men. Ophelia and Gertrude have no real Autonomy, they are at the mercy of Hamlet, Claudius, Rodrigo, and Laertes moods to define their moods, and when the men are in conflict the women suffer, which is death in this case. They are a portrait of what women in Shakespeare’s time were like, dependent on men and never could control their own fate. 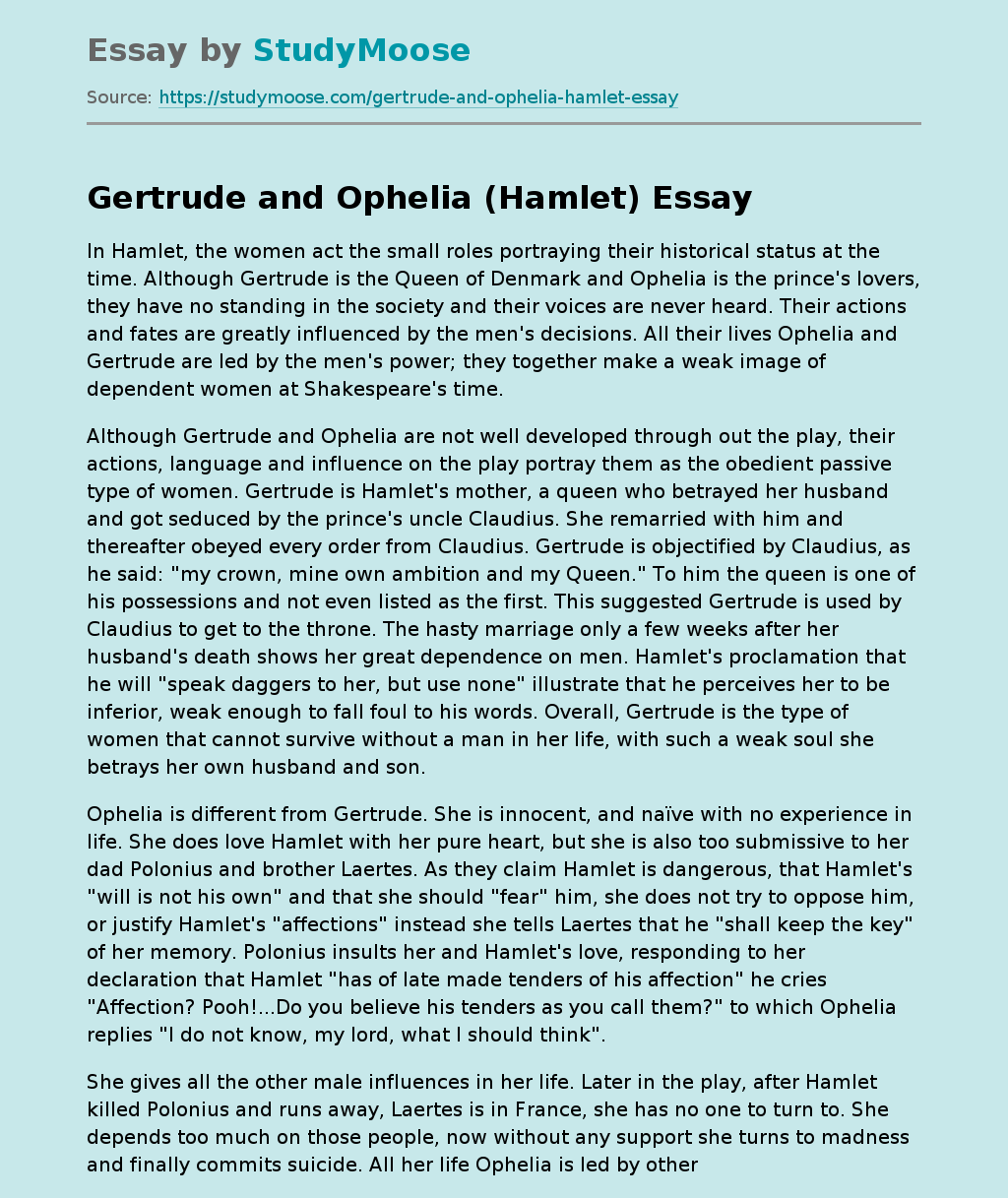