In her novel Frankenstein, Mary Shelley portrays all of her female characters from both positive and negative perspectives. Writing the novel in the early 19th century, Shelley addressed the common stereotypical view of women as inferior to men that society of the time held. Dominated by male narrators, the female’s perspective is ignored in the novel. By excluding the female’s perspective of Frankenstein, Shelley reinforces in the reader the message that society of the time attributed very little to women.

Don't use plagiarized sources. Get your custom essay on
“ Women in Frankenstein ”
Get custom paper
NEW! smart matching with writer

In addition to that, the firm ideas that women should be dependent on males, to be taken care of and having little potential to achieve anything independently, resonates in several of her characters. Resonating with other characters, the readers are able to see that women are weak-minded, feeble characters who become easily influenced. This trend can be seen throughout Frankenstein with characters such as Caroline Beaufort, Elizabeth Lavenza, and Justine Moritz, who all played less substantial roles compared to the males in the story.

Shelley portrays the persistent feminine strength in her female characters through the small triumphs of Caroline Beaufort, Elizabeth Lavenza and Justine Moritz, however Shelley acknowledges how weak minded and dependent they become in the face of adversity and their lack of control over certain situations. Shelley is able to show that Caroline Beaufort is able to sustain herself financially, however Shelley brings the reader to the harsh reality that she must sooner or later be dependent on a man. Shelley states, “…there was no other prospect of support.

But Caroline Beaufort possessed a mind of an uncommon mold, and her courage rose to support her in her adversity. ” (p. 28). When Caroline’s father was on the brink of death, she contained herself emotionally and made ends meet in her household financially. However, Caroline’s momentum died out when the harsh reality became that she couldn’t support herself because of her grieving emotional state. Shelly continues, “This last blow came over her, and she knelt by Beaufort’s coffin weeping bitterly, when my father entered the chamber.

He came like a protecting spirit to the poor girl, who committed herself to his care; and after the interment of his friend, he conducted her to Geneva, and placed her under the protection of a relation. Two years after this event Caroline became his wife. ” (p. 28). Caroline’s independency and self sufficiency was a failure since she was “rescued” from her troubles by Alphonse Frankenstein. Shelley’s bigger message to the readers is that women need to be rescued by men because they are incapable of maintaining themselves and need to be dependent on someone else.

Shelley is able to incorporate her time period’s stereotypical belief of women being possessions of men that need to be cared for in her example of Caroline Beaufort and Alphonse Frankenstein. Elizabeth Lavenza’s celestial beauty and enticing charm is what sets her apart from other women, however she is met by her death when she was unaware of Frankenstein’s mischievous secret. Elizabeth came into the Frankenstein household fully well aware of her expectations of fulfilling the position of Victor Frankenstein’s wife.

Victor states, “No word, no expression could body forth the kind of relation in which she stood to me- more than sister, since till death she was to be mine only. ” (p. 31). Victor expresses that his appreciation of Elizabeth is beyond what words can express, however it was his fault that Elizabeth met her untimely death. Victor’s creation took out his vengeance on poor Elizabeth, who was completely unaware of the knowledge that was being withheld from her. If Elizabeth had taken more of a firm initiative into Victor’s life outside of their relationship, there would not have been any discrepancies between the two.

Victor swore to protect Elizabeth, ironically he was the cause of her death because he withheld so much from her. The lack of their bond and understanding contributed to this miscommunication that allowed for the monster to kill Elizabeth. Shelley utilizes this instance to show the readers how the fault of Victor Frankenstein directly hurts Elizabeth Lavenza, which cost Elizabeth, her life. Justine Moritz remained strong in the arms of controversy, but due to her weak-minded mentality she was thrusted into her own downfall.

Moritz remained her firm stance on her innocence and she was firm on her beliefs. Her determination and persistence prompted her to gather witnesses in her defense to prove her innocence. She states, “I beg permission to have a few witnesses examined concerning my character, and if their testimony shall not overweigh my supposed guilt, I must be condemned although I would pledge my salvation on my innocence. ” (p. 79). Being the strong and independent minded thinker that Moritz was, she was hoaxed into giving a false guilty plead.

Moritz was forced to give a plead when the judicial authorities threatened her salvation, and being belittled forced her to give that statement. Victor stated, “The person to whom I addressed myself added that Justine had already confessed her guilt. ”(p. 81). Victor had the opportunity to save the woman’s life, however it was his hesitation and her weak will that allowed her to succumb to death. Shelley was able to portray a spectrum of both positive and negative perspectives of women, however she is able to show that they are weak infantile beings because none of the women survive.

The bigger message that Shelley is trying to send is that women lack the superior characteristics that allow men to be independent, self sufficient and non-dependent beings. Shelley’s significance of eliminating all her female characters surmounted to the feeling that society still wasn’t ready to allow women to reach their full potentials beside their indispensable characteristics. Being overshadowed by the society’s male dominated characteristic, women are set to the side to be onlookers when they should actually be the forerunners in this day and age. 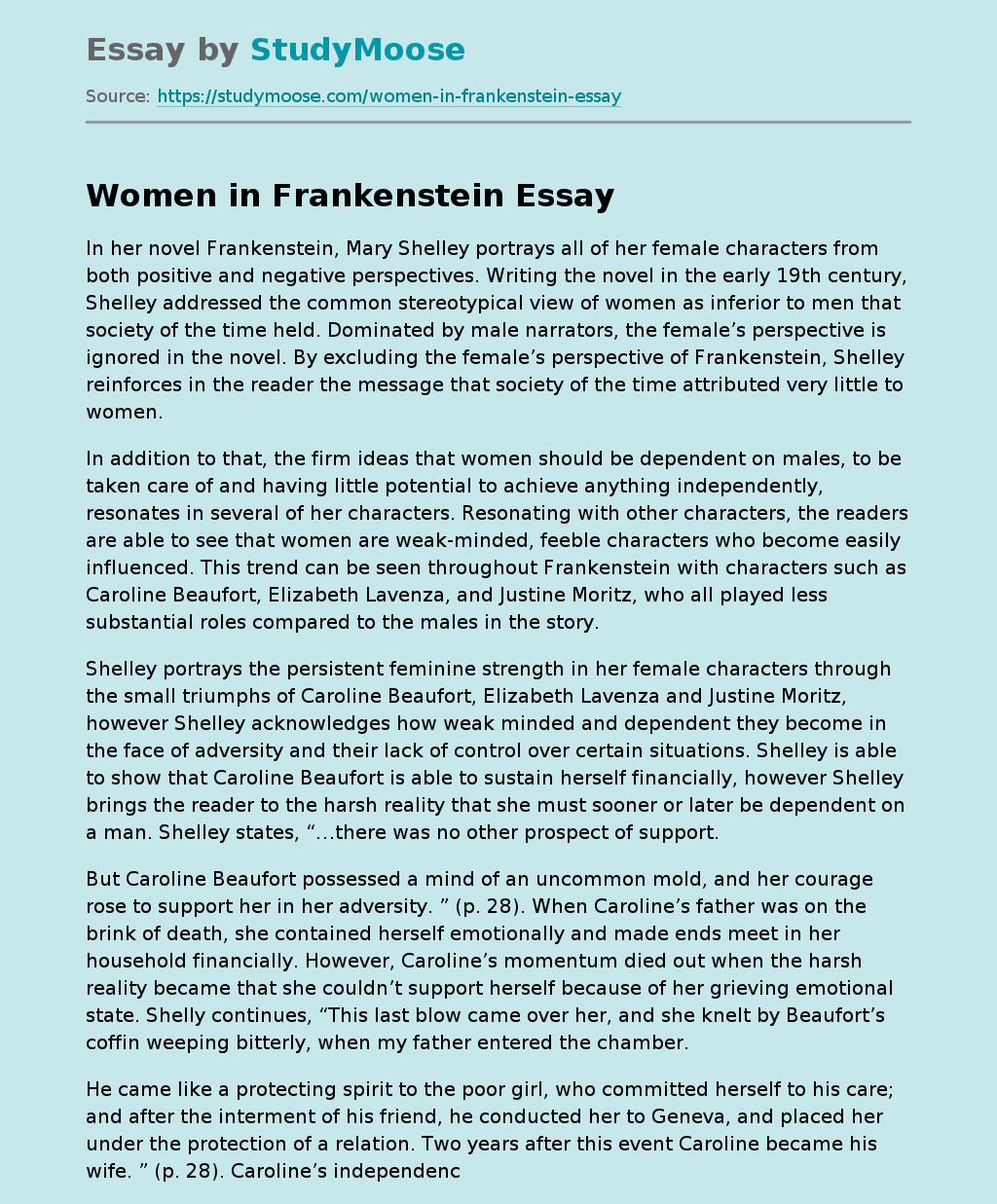