The Role Of Heroism In Beowulf

The definition of heroism is defined in many distinct ways. Different traits like respect, strength, courage, willingness to take his or her life, and loyalty can all define heroism. That hero is recognized for his or her extraordinary actions for being daring, strong, and acting with high respect. Beowulf, the fundamental character, demonstrates these qualities by protecting his people, the Danish King, and Hrothgar in the epic poem, Beowulf. He is a genuine hero by honoring his country and applying his strength and power to protect his people.

Don't use plagiarized sources. Get your custom essay on
“ The Role Of Heroism In Beowulf ”
Get custom paper
NEW! smart matching with writer

Moreover, an epic hero is somebody who is stronger and more astute than any ordinary man and does overwhelming deeds for the safety of others. Beowulf possesses the quality of thirty men and utilizes it as an important weapon to fight all the evil. This is all shown through his tremendous battles with Grendel, Grendel’s mom, and the dragon.

Beowulf’s first achievement as an epic hero is his life-threatening fight with Grendel.

Having the strength of thirty men, Beowulf is able to defeat Grendel. Moreover, Grendel is a colossal monster, a descendant of Cain, who savagely kills guiltless Danes for nearly twelve years. After becoming aware of Dane’s concern, Beowulf went off to help the Danish without being called. Despite the fact that Beowulf has men all on his side, he draws an intense fight with Grendel alone and without shield or weapons. He seems to have super-human strength since he kills Grendel with his very own bare hands. However, Beowulf wins success with the ripped arm of Grendel as his trophy.

Beowulf knew when he crossed the sea, his motivation was to win the goodwill of his people.

After Beowulf slaughters Grendel, Grendel’s mom challenges him. She shows up extremely distraught and furious; however, Beowulf doesn’t care. Beowulf struggles and fights Grendel’s mom at the very bottom of the sea until he finally sees a sword hanging on the wall and then is able to kill her. He sees this sword from the help of God. Nevertheless, he kills her by slicing her neck with a mammoth sword that can only be lifted by an individual as brave and strong as Beowulf. Cleaving off her head, he proudly carries it from the bloody sea with no trouble. Nevertheless, it takes four men to lift and bring it back to Heorot. This quality is a key characteristic of Beowulf’s heroism.

Fifty years went by, and Beowulf discovers that another dragon is harming the Geats. Beowulf recalls his past when he slaughtered Grendel and his mother and chooses to proceed to kill this dragon. Beowulf demonstrates that he will do anything for glory, fame, and the betterment of society. He risks his life in his experiences to accomplish these objectives. Beowulf’s ability to fight encourages him to bring down the dragon. When Beowulf is battling the dragon, he realizes that his sword can do no harm; he continues to keep fighting. Since Beowulf was so ready to risk his life for other people, he gained glory throughout. Daneland and the Geats both felt that the incredible deeds that he had done caused him to earn glorification. After his death, the people remembered his actions and how the impact he had on the people.

To sum up, Beowulf had all the excellent characteristics of an epic hero. Beowulf performed many bold deeds, put his life in danger for the benefit of the society. The epic hero, Beowulf, never had an issue with putting himself at risk for the good of society. Beowulf exemplifies a few qualities, such as having more massive physical strength and fearlessness when fore facing danger. Beowulf tells Wiglaf to build a large monument after him to show everyone his extraordinary actions, and how major of an impact he was to the people. Through all of his fabulous missions, he demonstrates to others that he is an epic legend, and never let his people down. Beowulf is an extraordinary Anglo-Saxon hero to a very great extent.

The Role Of Heroism In Beowulf. (2020, Sep 03). Retrieved from https://studymoose.com/the-role-of-heroism-in-beowulf-essay 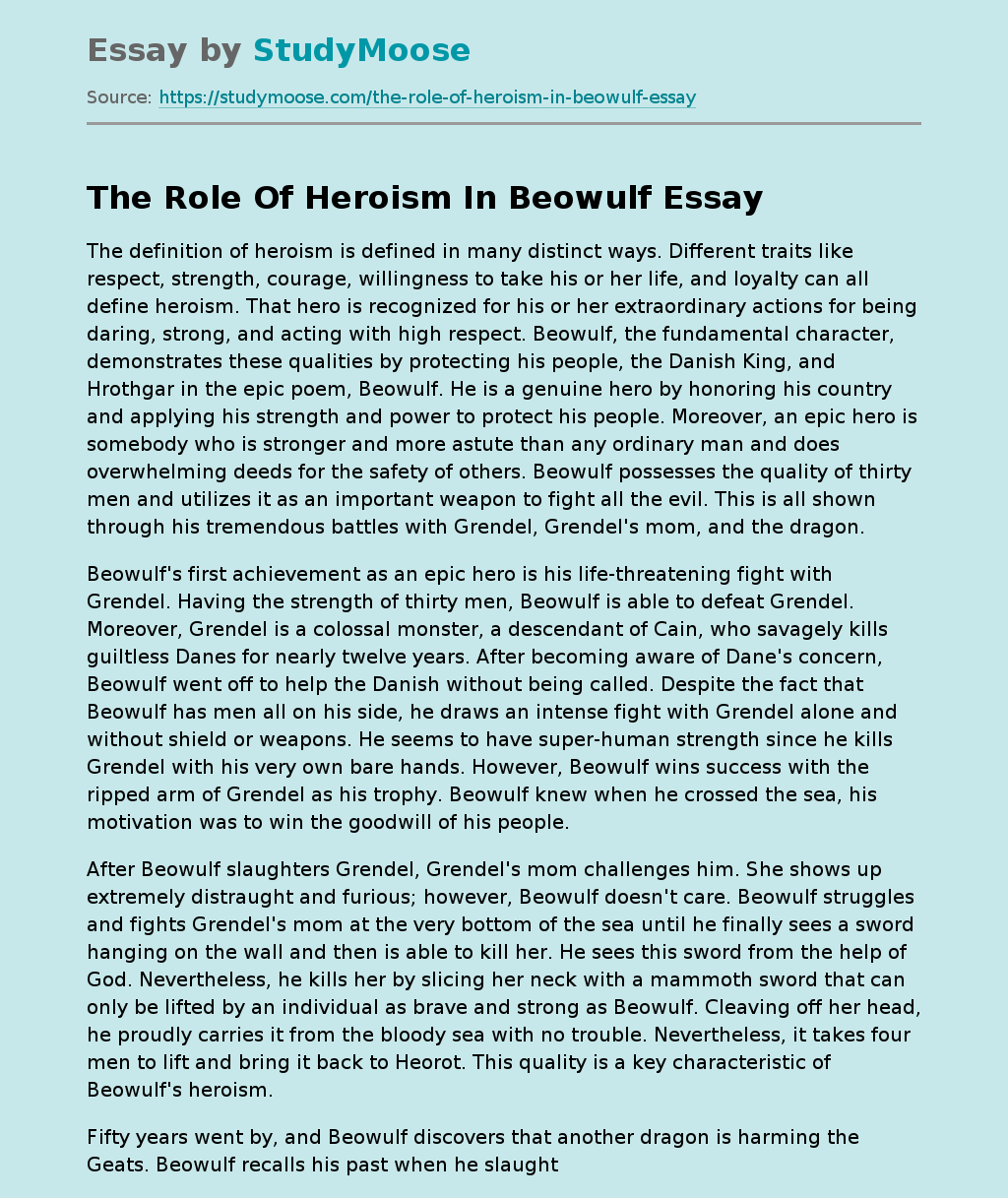