The Road by Cormac McCarthy

Imagine a world where the skies are grey and the ground is torn to pieces. Where there is no civilization present, nor another human being to be seen. Where the feeling of hunger influences you to consider the idea of human flesh filling your insides and persuading you to do so. A world infested with murder, crime, and despair—which have now become necessary for survival. Imagine the air thick with black clouds towering over your very essence and having to muddle through 10 feet of snow and a strong gust of wind.

Don't use plagiarized sources.
Get Your Custom Essay on The Road by Cormac McCarthy Just from $13,9/Page

A world where all faith should be gone, but amiss all bad things, it continues to linger through the eyes of the youth. Being able to see the light when your surroundings are pitch black signifies that humanity has not been lost completely. Although, the man knows in his heart that death is inevitable and dangerously close, he continues to live for the sake of the boy whom he believes carries the final hope for humanity.

In Cormac McCarthy’s The Road, the author conveys that although there can be despair and bloodshed in the world, love overcomes all with a little faith. The man views the boy as a symbol for hope and provides the man with a purpose in life, to protect the boy above all. Violence is the antagonist in the novel because the people are driven into thievery, murder, and cannibalism because of the post-apocalyptic landscape. Food is scarce and people are starving, and consequently, people turn to thievery as a way to fend for themselves. At this point in time, stealing is not a crime anymore. There is no government, there are no regulations, and all is fair game. When the man says that he will protect the boy at any cost, it is not an understatement. When a member of a bloodcult posed a threat to the boy, the man did not so much as fidget to reach for the safety of his weapon. Without overthinking, the man shot the degenerate dead before his son. The aftermath resulted in the man soothing the boy by claiming that his job is to take care of him and that he was “appointed to do that by God” and even states that he would, “kill anyone who touches the boy” (77). He tells the boy that even if they had killed someone it would not be a very bad thing because God had given the man permission to do it, to protect the boy, and it was a necessary thing to do in order to live.

The biggest act to violence, however, is the scene of the discovery of the dead infant. The scene is traumatic to the boy because he had seen the woman’s belly swollen from carrying an infant earlier on, and then shortly afterward, came across the remains of the baby laid on the ashes of a fire. The man describe that what the boy had seen was “a charred human infant headless and gutted and blackening on the spit. He [the man] bent and picked the boy up and started for the road with him, holding him close. I’m sorry, he whispered. I’m sorry” (198). The man feels instant regret for letting his guard down and allowing for the boy to sight such a monstrous thing. He apologizes to the boy with the argument that he should have shielded him from how harsh the world can be. The violence is inevitable and cruel and the boy comes to this realization at this time of the novel.

In the novel, the father and boy have a strong relationship in which the father would risk his own life to save his son’s, displaying that love triumphs all. It is through acts of genuine tenderness, like when the man wakes up, “in the woods in the dark and the cold of the night he’d reach out to touch the child sleeping beside him,” (3) that the reader comes to understand the love the man has for his son. The drastic change from contemplating death, to thinking about the life of one’s progeny displays that the man lives only to protect the boy, “that the boy was all that stood between him and death” (29).

How the man would reach out to assure himself the boy was still there proves that the boy is the single most important thing occupying the man’s thoughts, a noble reason to continue to live. The boy is the only thing the man has left, and thus, he loves him endlessly. The quote depicts the story line with impressive accuracy from describing the weather, to the love that triumphs all. As well as when the man is dying and tells his son, “I know. I’m sorry. You have my whole heart. You always did. You’re the best guy. You always were. If I’m not here you can still talk to me. You can talk to me and I’ll talk to you. You’ll see,” (279) the reader is moved by the father-son relationship. What is touching is that the dialogue is convincing and it is not hard to picture a father saying sweet things to his boy in such a manner. The man truly believes that the boy deserves this title of being the “best guy.” Faith is the driving force for the man and the boy to continue on their path forward and stay alive.

Although the boy has no memory of the previous world and was born into a world of violence, he continues to practice faith. Since, this is the lifestyle he was brought up in, the boy does not know anything other than what his father has told him, the boy goes about doing and believing things because that’s all he knows “Unlike the father, however, the boy exhibits no ego but only the altruism required for the survival of a species. The boy practices hope in a hopeless world; he appears to know no other way” (Barrera 1-3). The man and the boy have faith that good will come soon and they are certain of this because of small acts of kindness that they stumble upon. The man and boy see finding temporary shelter, a basement with ten food cans, or a fully functioning cart as a sign that the omnipresent God is watching over them. Although it is never clear whether the man believes in a God or not, he is certain that the boy might just be the last holy thing on the planet. The man truly believes that the boy is filled with goodness despite the horrid events the boy has seen. He also believes that the child was, “his warrant,” and he said, “If he is not the word of God God never spoke” (5).

The reader becomes aware of the man’s feelings towards the boy when the man is on his death bed and, “As he lies dying, the father sees his son approach, carrying a cup of water with ‘light all about him’” (Cooper 218-236). The characterization of the boy’s apparent halo resembles the figure of God and even when the boy leaves the “light moves with him” (233). The man decides that his sole purpose in life is to protect the boy from anything that poses a threat to him. He feels that if he can protect the boy he is doing well; it is his “warrant.” This is the main reason the man doesn’t stick a bullet into the boys head followed by his own earlier. He sees the “fire” inside the child and perceives that if he can prolong the boy’s life, he is doing the righteous thing. In his dying hour, the man gives the boy one last glimpse of hope when he claims that the fire lives inside the boy when he says, “Yes you do. It’s inside you. It always was there. I can see it” (278-279).

This may be the man’s final attempt at reminding his son that humanity will always live inside him and that he should never become a “bad guy.” When the boy is seized by a blood cult, the man draws his gun and kills him on the spot. The man was willing to go against his belief of non-violence when his son was involved. The boy confronts him shortly afterward asking if they were still entitled to being the “good guys” and the man calmly explains that, “love can yet evoke that which can be known beyond language” (Barrera 1-3).

To conclude, the man and the boy face terrible circumstances in the novel, The Road. They do, however, manage to stay alive by the little resources they can garner and by keeping their faith animate. It is true that the world they inhabit is filled with unspeakable violence, but the father-son relationship illustrated proves that love can triumph over any obstacle. It is with love that together they survive and rejoice at the little things. It is described from the man’s perspective that the boy is the only hope in this chaotic world. The man sees a light in the child that no one else does, and because of this, decides to live to make his last mission to protect the boy from any source of harm.

The Road by Cormac McCarthy. (2016, Mar 17). Retrieved from https://studymoose.com/the-road-by-cormac-mccarthy-essay 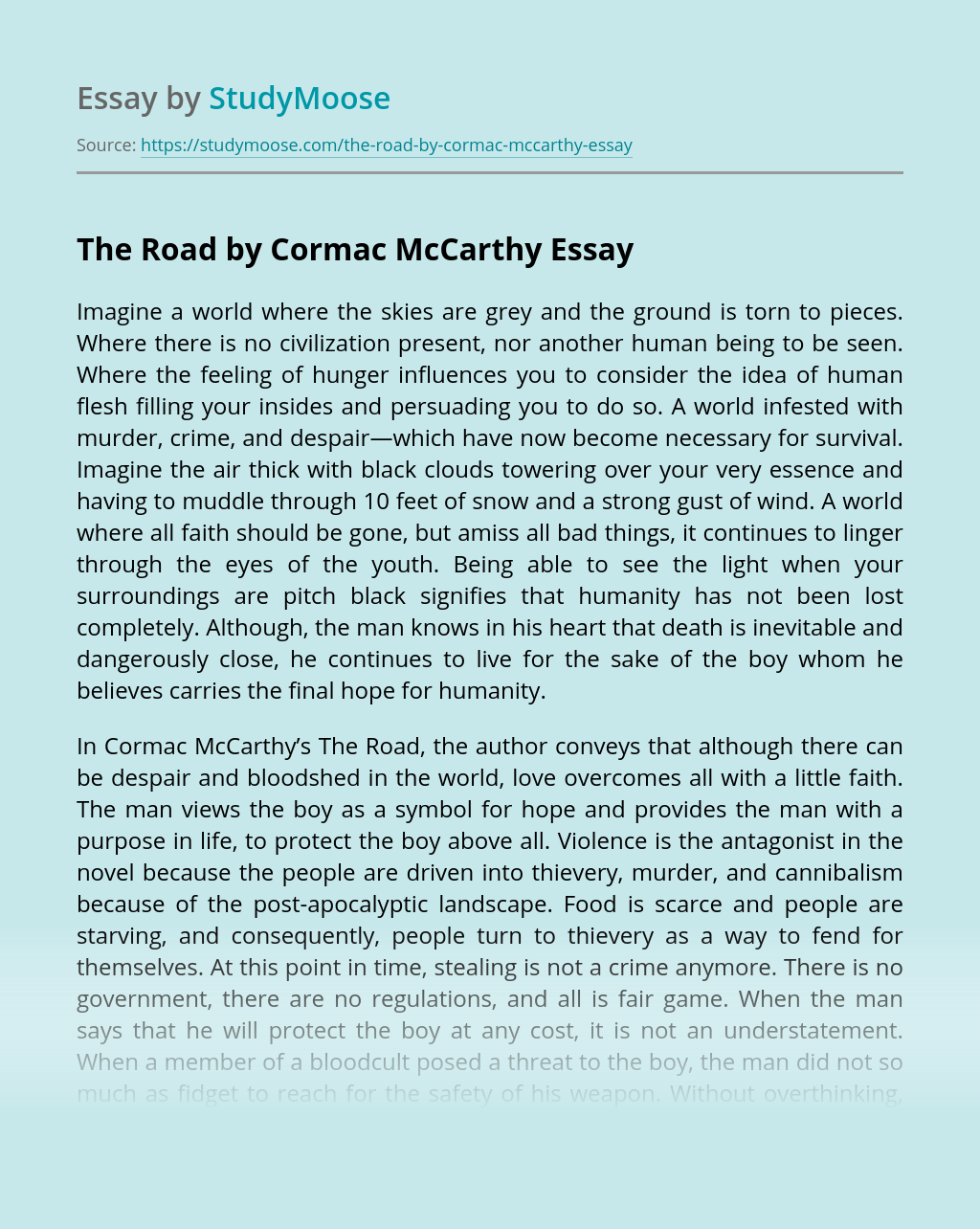 "Naming of parts" by Henry Reed, and "War is Kind" by Stephen Crane

“War…ouhh….What is it good for…absolutely nothing!” sang Edwin Starr in 1965. He felt the same vibe that both Henry Reed and Stephen Crane felt in their poems, “Naming of Parts” and “War is Kind.” Although these authors may not have said it as straightforward as Starr did in his hit single “War,” they still had...

There are both similarities and differences between President Abraham Lincoln, leader of the Union, and Jefferson Davis, President of the Confederate States, as leaders during the conflict of the Civil War. These two war heroes lived parallel lives at birth. Both native Kentuckians, Abraham Lincoln was born February 12th, 1809 in Hodgenville, Kentucky and Jefferson...

Enron: Smartest Guy in the Room

Enron: The Smartest Guys in the Room is a documentary that was produced in 2005 as a reflection of the 2003, bestselling book with the same name. The documentary was written by Bethany Mclean and Peter Elkind. The film, produced by Alex Gibney is an explicit demonstration of how reputable corporations can tumble down because...

Poem Explication I carry your heart I carry it my