The Road by Cormac McCarthy: Father and Son Story

The Road by Cormac McCarthy is a novel based in a post-apocalyptic world. It revolves around the life of a father and a son who are struggling to survive. Everything around them is destroyed, filled with ash and stripped of life yet the two continue to move south, towards the sea hoping for better days to come. Their lives are lived in a constant state of fear. Every day spent scavenging for food as they are constantly moving, trying to stay unnoticed and safe.

Don't use plagiarized sources. Get your custom essay on
“ The Road by Cormac McCarthy: Father and Son Story ”
Get custom paper
NEW! smart matching with writer

In the world that they live in, survival is the only goal and the concept of morality has become non-existent.

Cannibalism is the greatest fear as everyone is a predator. But in this “Barren, silent, godless” (4) world, where “the days more gray each one then what had gone before” (1) and where man is prey to man, the man and the boy hold their ground. They have not yet lost their sense of morality and refuse to resort to a lifestyle that many around them have adapted.

To them certain acts are “intrinsically wrong” (O’Brien) and never justifiable. This way of thinking and ethical view resonates with the concept of moral absolutism.

This philosophy, built on the foundations of Immanuel Kant’s belief that morality is the ability to act rationally, may be used as an explanation as to why the man and boy stick to their principles. Though, the two have very similar beliefs, the extent to which they follow and believe in them is different as the boy has stronger moral values.

Therefore, under Kant’s philosophy, the boy in Cormac McCarthy’s The Road is arguably a moral absolutist due to the upbringing and relationship between him and his father as they are both accountable to one another and have a relationship as strong as one between man and God.

Absolutism or something that is absolute is a principle that is universally valid, and is viewed without relation to other things. Moral Absolutism is when morality is universally valid and certain principles are viewed without relation to other things therefore they remain absolute no matter what situation or context they are put it. As a result, moral absolutism outlines that certain acts are always immoral and are never justifiable regardless of the motivation behind them or the consequences of those actions. When analysing Kant’s philosophy on morality there are three aspects that need to be considered.

Firstly, as mentioned before, moral principles are absolute and do not allow for exceptions. These principles are not questionable because if they are put into different contexts and hypothetical situations, this opens doors to potentially infinite number of revisions and subtle qualifiers, and leaves one in a moral mess that Kant thought he was clarifying. (Rousseau) Secondly, Kant believed that all human beings are intrinsically important and that one should always respect the intrinsic worth of rational beings (Weilenberg).

Therefore it is wrong to treat others as instrumental means for one’s gain (Josephson Institute). Thirdly and finally Kant contributed to the rule of Universality, which is that one should only act in a way that they believe would be appropriate if it was applied universally. Meaning that if one believes that an action is moral, would it remain moral if everyone around them was to act in that way. The rules and principles outlined in Kant’s moral philosophy and the basics of moral absolutism are visible in The Road by Cormac McCarthy.

The man and the boy follow this belief system but as mentioned before, the extent to which the boy follows or believes in them is much different than the man. The man refers to himself and his son as the “good guys” and as outlined in Weilenberg’s essay they follow a moral code. This code consists of primarily never resorting to cannibalism, to not lying or stealing, helping others and never giving up (Weilenberg). These principles are very similar to those outlined in Kantian moral philosophy. All rational beings should be respected and should not be used for one’s own gain.

Therefore cannibalism is never justifiable and helping others is a moral principle that must be followed. Throughout the novel, the man and the boy face many life threatening situations and it is during these situations that their level of morality is either weakened or strengthened. The first example of this would be when the man and the child encounter a man who has been struck by lightning but the man convinces the boy that it is not beneficial for them to help even after the boy’s urging (50).

The man is ignoring principles and is focusing on his or their own good which goes against Kantian philosophy but even at this point the boy tries to convince his father otherwise. At another instance the boy responds to his father by saying, “If you break little promises, you’ll break big ones” (34) just as Kant argues that justifying one action opens up doors for an infinite number of possibilities which goes against absolutist principles. One of the main issues in the novel is cannibalism.

The society in this post-apocalyptic world has in a way accepted cannibalism because of the threat of starvation but the man and the boy promise one another that no matter what the situation, they will not resort to it as the boy states, “We wouldn’t ever eat anybody, would we? .. No matter what? ” and the father reassures his son by repeating, “No. No, matter what. ” This is the fundamental statement that shows an absolute moral. Therefore they are arguably following Kantian philosophy and abide by moral absolutism.

The man and the boy are living in a world where morality does not exist; as a result of this one many question the motivation behind the man and the boy’s moral standing. Though everyone around them has lost all sense of humanity, the two still follow certain principles. Early on in the novel, the man says, “If he [the boy] is not the word of God God never spoke”(5). Though this, it can be inferred that the man sees God in his son. He sees a superior being and a higher truth in his son. The man’s life surrounds around his son’s survival and he is his one and only motivation.

Same applies to the son, as they both rely and trust in one another. Not only is The Road a tale of survival in a post-apocalyptic world but it is also the tale of the bond between father and the son and how strong this bond can be. The father preaches absolute morals to his son and they are both accountable to one another. This, is arguably the reason as to why the man and the boy hold absolute morals and values. In God and Moral Absolutes, Mathew O’Brien argues that once the existence of God is ruled out, it is impossible to demonstrate that there are moral absolutes.

This argument can be looked with a different perspective. Though, the concept of God is not as strong in the man or the boy’s life their moral standing is very strong. Here the existence of God is ruled out but the bond between two people exists and as a result of this bond the father and son continue to live by their values. Also after the father’s death, the son continues to spiritually communicate with his father but it is stated, “He tried to talk to God but the best thing was to talk to his father… ” (286). Here, it may be argued that the bond between father and son was much stronger than that of man and God.

The Road by Cormac McCarthy: Father and Son Story. (2016, Sep 16). Retrieved from https://studymoose.com/the-road-by-cormac-mccarthy-father-and-son-story-essay 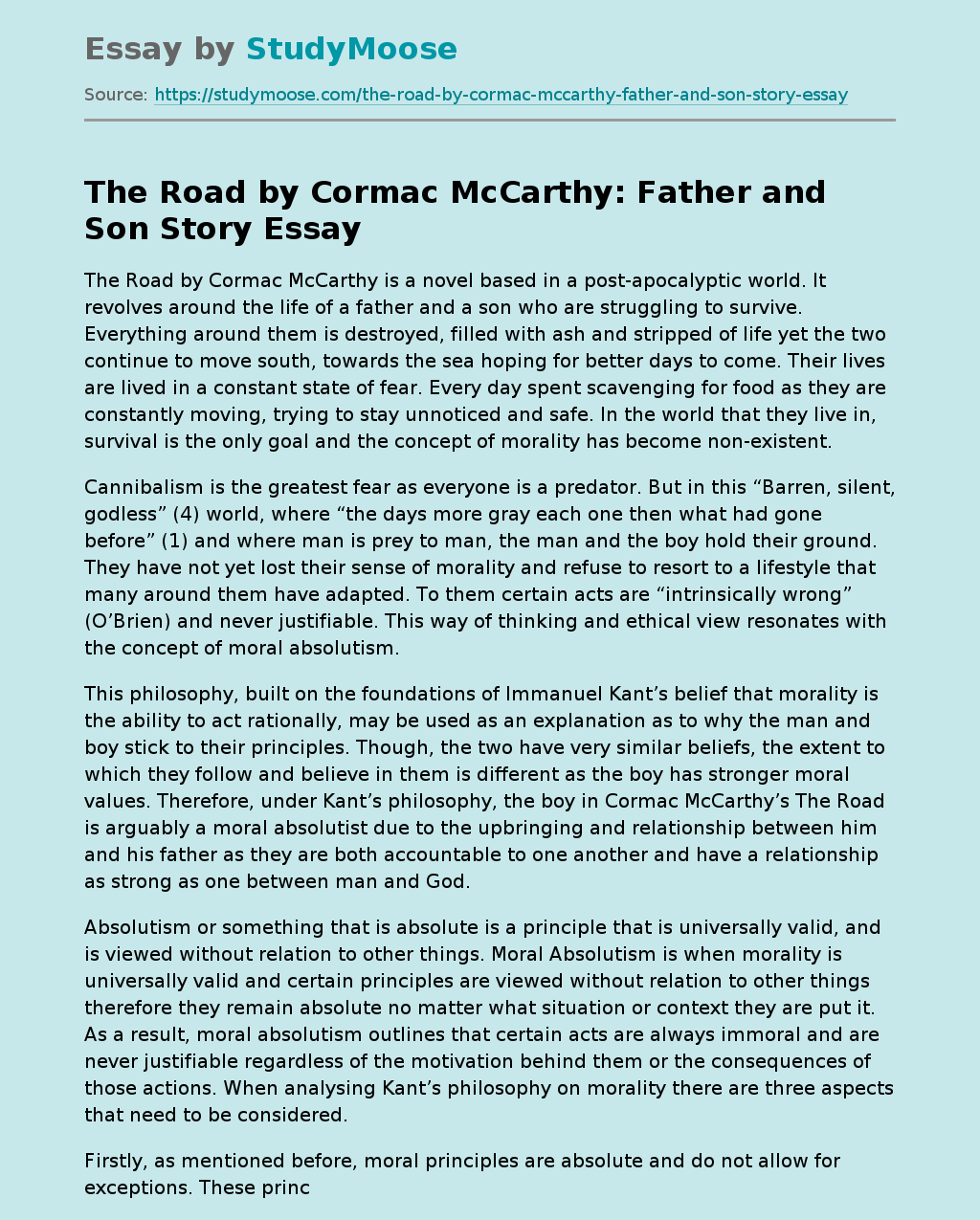