Symbolism in The Road by Cormac McCarthy

The Road by Cormac McCarthy powerfully puts the grief and beauty of fatherhood in a dark love perspective. Throughout this novel there is an invariable reminder of “the fire” which symbolizes many things, protection, hope, comfort, but mainly the fire symbolizes the will to survive, but more important to survive morally. The fire brings the man, and boys relationship closer together, and gives them light throughout the darkness of their journey.

During desperate times, it becomes harder for humankind to base their decisions on morality rather than survival.

Don't use plagiarized sources. Get your custom essay on
“ Symbolism in The Road by Cormac McCarthy ”
Get custom paper
NEW! smart matching with writer

While the father and son scavenge abandoned homes and stores for canned food, the majority of the other survivors have turned to cannibalism. The boy asks his father if they would ever get desperate enough to eat people. His father reassures him that they will not, “Because we’re the good guys, and were carrying the fire” (129) Which means only good people have the fire. Sometimes ‘carrying the fire’ refers to the man and boy’s efforts to conserve their civilness in the uncivilized world around them.

Proficient in: The Road

From the beginning of human civilization, fire has been used by humans for survival, and the fire in the novel was not an expectation. The path of the father and son, there were many obstacles that stood against them, yet they did not give up, and the fire has assisted them. McCarthy states, “the night they camped in the ravine and built a fire against a small stone bluff and ate their last food.” (189) The fire comes to ignite their will, it produces the flame and keep their life going, the fire will be endlessly protect the father and son.

At night the boy falls asleep peacefully because “the fire” protects them, and they are not going to be hurt because the fire is invisible and keep them safe. Along the journey, the son becomes aware that some people they have met would harm them if given the opportunity. The boy asks his father for reassurance that nothing bad will happen to them. The man responds that “nothing bad is going to happen to us… Because we’re carrying the fire.” (98) In this scenario, the fire symbolizes protection.

In The Road carrying the fire is to help the father and his son in surviving the post-apocalyptic world. While the women killed herself and gave up, the man continues to thrive in being a survivor, the man often uses the phrase “the fire,” and he encourages the boy to “carry the fire” whenever the boy is feeling that all is over, it’s the fire that gives the boy hope. The Fire symbolizes hope for not only the son and father but also for humanity. In the darkness the fire of hope will guide them, and hope which has guided them through this journey. The man gives the boy hope and comfort when he states, “…nothing bad is going to happen to us… Because we’re carrying the fire…” (87) The father makes the son believe that the fire is hope for them. When the father reassures the son that they are safe and carrying the fire it gives the boy a sense of hope.

Furthermore, The Road “the fire” symbolized many things throughout the story. The phrase “the fire” was never fully explained but it was shown, the fire was shown to symbolize protection, survival, and hope of a better tomorrow. Before the man dies, he tells the boy to keep “carrying the fire and going down the road” (232) the man is saying he wants the boy to continue to survive and hope for a better tomorrow. Even when the man dies the fire continues to keep them connected, the fire continues to give the boy the will to thrive on his journey.

Symbolism in The Road by Cormac McCarthy. (2021, Dec 07). Retrieved from http://studymoose.com/symbolism-in-the-road-by-cormac-mccarthy-essay 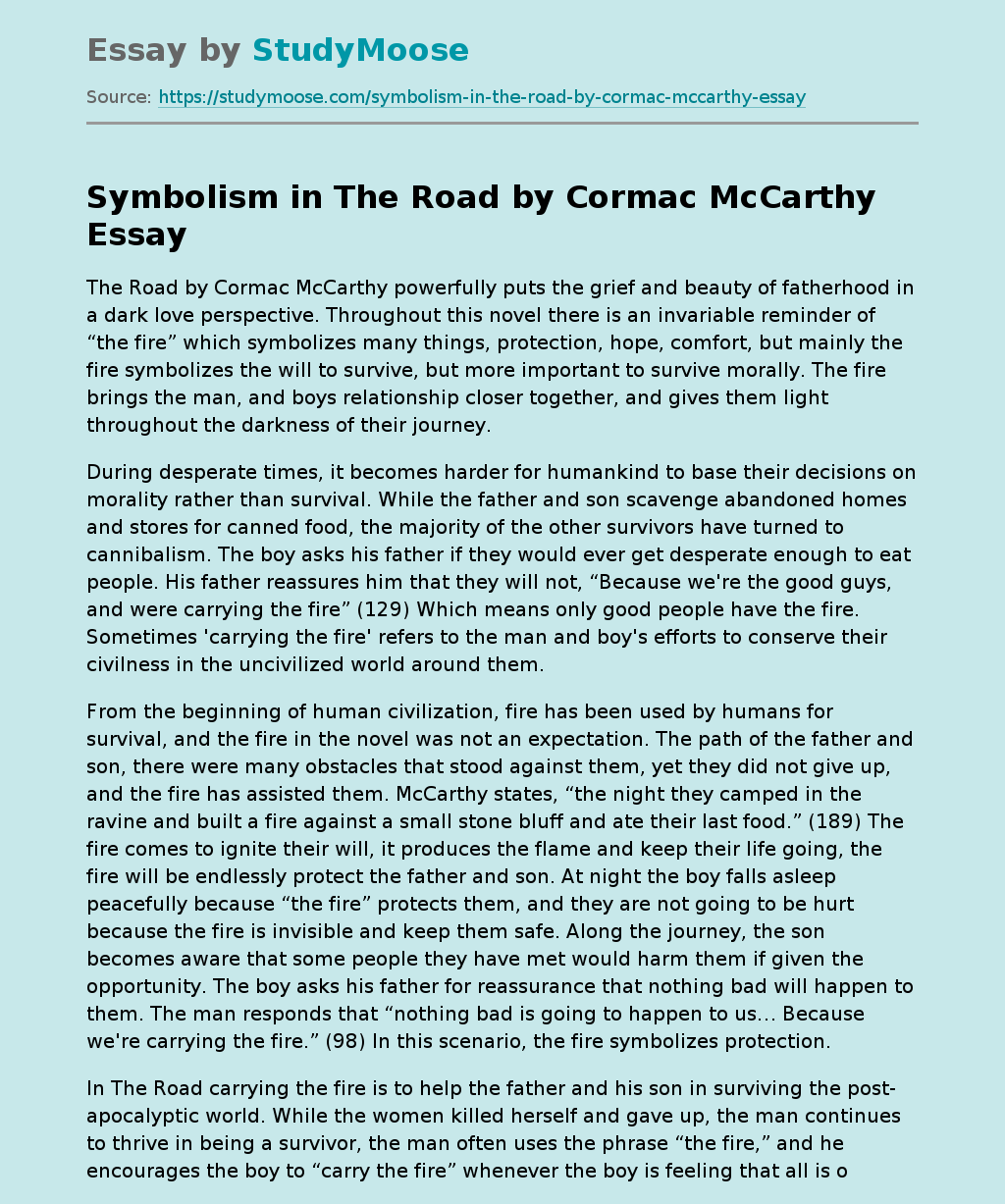