Analysis "All the Pretty Horses" by Cormac McCarthy

In the novel All the Pretty Horses by Cormac McCarthy, he presents several symbols one of them being blood. Blood is very crucial and its significance is expressed in the novel. John Grady Cole’s devotion is compensated in blood. The brutal image of blood and violence is morbidly displayed throughout the whole novel. It is an important symbol and a repetitive element, because it symbolizes the cost John Grady pays for everything he loves.

It also represents the world around him and helps to define the attractiveness it has, despite the difference in violence and delicacy.

Don't use plagiarized sources. Get your custom essay on
“ Analysis “All the Pretty Horses” by Cormac McCarthy ”
Get custom paper
NEW! smart matching with writer

Specifically, Grady only cares about three things that really matter to him which he later has to pay in blood: his life, horses, and Alejandra. The presence of John Grady exists within the use of blood, intertwining his life to the natural beauty and animals. Blood is crucial for the human race, we need it to live, once enduring the pain we learn and if we lose it all, we die.

Proficient in: All the Pretty Horses

The color red has several meanings and is shown often. Simply, implying the vicious world that John Grady lives in and the bloody landscape that surrounds him. For example, when he’s attending his grandfather’s funeral, the landscape is described as ‘the sun sat blood red and elliptic under the reefs of bloodred cloud before him’ (McCarthy 5). In this scene, McCarthy depicts a vivid illustration of the history between Americans and Native Americans; the bloody battle in which they fought for control over the land.

He uses blood in order to achieve his dreams and make them into a reality, because that is what he believes in. That justice can only be served through blood, which is actually John Grady falling back into the real world and setting out to a different country.

Later in the text, McCarthy describes the ghosts of Comanche warriors who once used that same road which John Grady is riding to cross the land, the road is described as ‘pledged in blood and redeemed in blood only’ (McCarthy 5). Specifically, the battle is defined as a contest between which groups can shed the most blood and can only alter the previous deaths by causing more bloodshed. John Grady soon realizes that America is no home to him, he can no longer stay there because it doesn’t give him the life he’s looking for. Therefore, he leaves Texas with his best friend, Rawlins to Mexico. John Grady hopes that Mexico can satisfy his dream of succeeding and eventually owning his own ranch. He has specific goals which he wants to fulfill, for example like the horses that are trapped, he wants to set them free so they could roam around more naturally and freely. He had always hoped for a dream like this.

However in order to live a normal spirited life in Mexico, John Grady had to pay for his life, love, and Blevin’s horse in blood. The complicated love between Alejandra and John Grady is indicated through blood during their romantic scene. ‘Drawing blood with her teeth where he held the heel of his hand against her mouth that she not cry out’ (McCarthy 142). In this text, John Grady uses his hand to make sure Alejandra keeps quiet about everything they are doing. He doesn’t want anyone to know about their secret reunion, because it’s too risky. Alejandra bites down on his hand to silence his passion, which causes him to bleed. Similarly another incident occurred too, in which John Grady was in prison. He got into a terrible fight in which knives were being used, he was forced to protect himself by slaying the other man. The quote ‘from the red boutonniere blossoming on the left pocket of his blue workshirt there spurted a thin fan of bright arterial blood’ (McCarthy 201), describes John Grady struggling to save himself and in doing so murdered the other prisoner, thus resulting in blood again.

Furthermore, John Grady pays for Blevin’s horse in blood as well, when he tries to escape with it ‘he looked down at his leg. His trousers were dark with blood and there was blood on the ground. He felt numb and strange but he felt no pain’ (McCarthy 266). This occurs right after John Grady has been shot while getting back Blevin’s horse at the end of the book. He had been shot in the leg and bleeding nonstop. The term ‘blood’ is used once again, he’s paying for his love with blood. John Grady has mentally and physically become used to this idea of getting hurt, and in turn, he no longer feels the pain.

The importance of horses often appears in the novel as an evasion from the world for John Grady, sometimes viewing the horses as more skillful and advanced to humans. ‘The horse had a good natural gait and as he rode he talked to it and told it things about the world that were true in his experience to see how they would sound if they were said. He told the horse why he liked it and why he’d chosen it to be his horse and he said that he would allow no harm to come to it’ (McCarthy 242). In this quote, John Grady expresses his love and desire to protect the horse no matter what the cost is. He speaks directly to it, making a promise in which he will allow no physical harm to come near it.

In conclusion, tragic events are what makes the world admirable and makes people appreciate the little things they have in life. If it wasn’t for John Grady paying for his actions/wants, he wouldn’t be able to see the elegance in the world. All the bloodshed in the novel is used to create John Grady’s identity and make him realize what things in life are worth fighting for and what aren’t. McCarthy is simply trying to say that blood is what ties everyone together in the old west. Everyone has the same pure/free blood, but not many people take advantage of it. John Grady learns to embrace human nature after being released from prison, he corrects the violence that was inflicted onto him and seeks vengeance as the last step in his rite of passage. McCarthy reveals that violence and bloodshed are an unavoidable part of the human condition. It simply proves that by committing violent acts, one can be seen with loyalty and courage, defining who they really are at the end.

Analysis "All the Pretty Horses" by Cormac McCarthy. (2017, Feb 24). Retrieved from https://studymoose.com/analysis-all-the-pretty-horses-by-cormac-mccarthy-essay 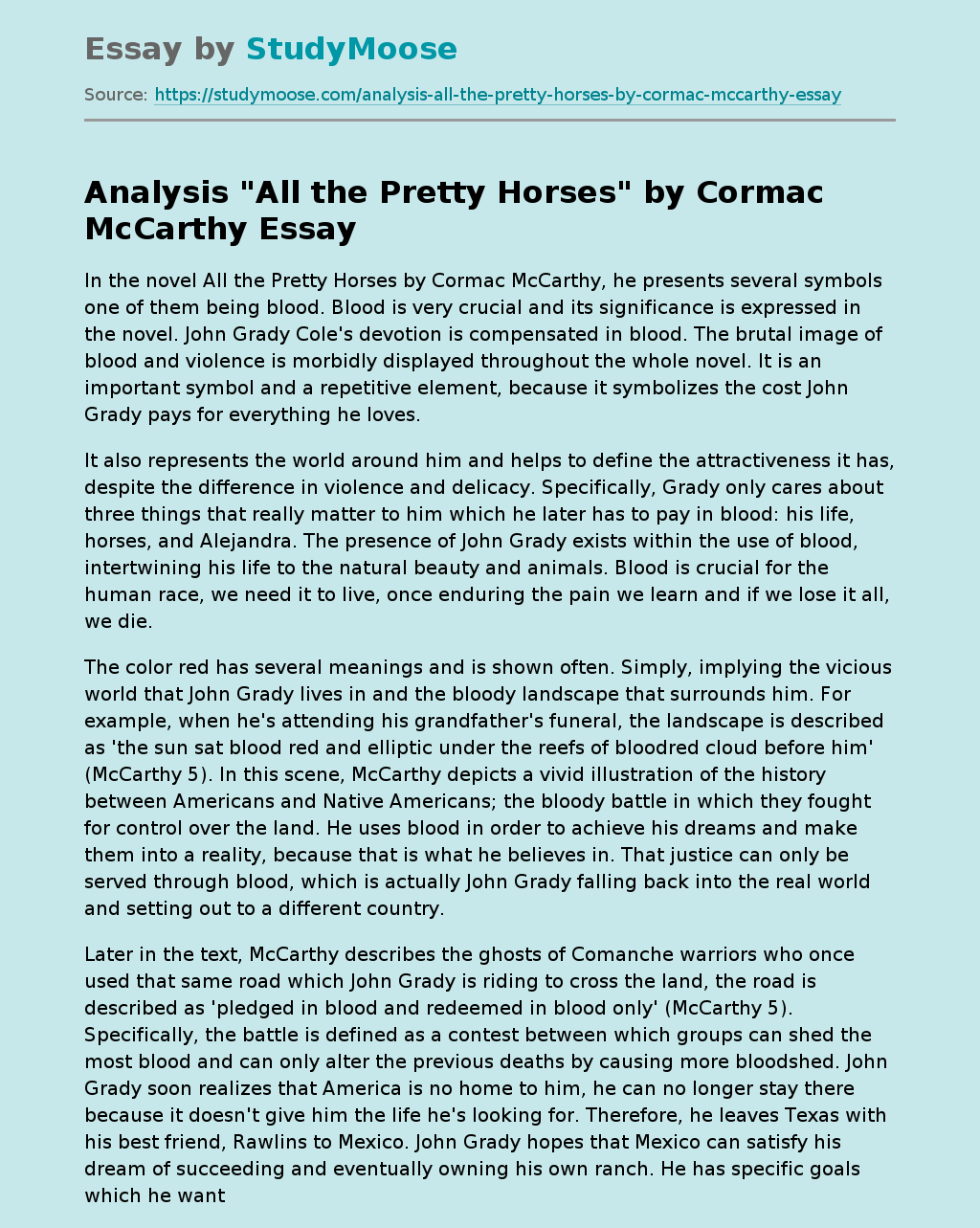