The Renaissance was a time when some of the most recognized literary works were just beginning to be created. This was a time period when plays and historical poems were created and when new writers were just beginning to enter the theater and literacy scene. I will be talking about some of the authors who have left an impact on the Renaissance literary movement, and how their works are still used and recognized today, as well as how the works have left an eternal impact on the English world.

Don't use plagiarized sources. Get your custom essay on
“ The Renaissance`s English Poems ”
Get custom paper
NEW! smart matching with writer

The first author from the Renaissance that I will be talking about is Edmund Spenser. Spenser was born in 1553 in London, England. Spenser’s youth consisted of attending Merchant Taylor’s grammar school, where Spenser studied Latin, Greek, Hebrew, and some music as well. At the young age of sixteen the young author was influenced by Italian poet Petrarch. After graduating in 1573 with an Art’s Bachelor degree from the University of Cambridge, Spenser’s poetry provided many foundations for him to build a high platform for his works and theater work as well.

Many years later, in 1590, Spenser wrote the Epic poem The Faerie Queene thus becoming one of English history’s most influential and longest poems.

The Epic poem influenced many other authors to write more poems about English fantasy and about biblical stories as well. Another very well known author from the Renaissance was William Shakespeare.

Shakespeare was baptized on April 26, 1564. As a young boy, Shakespeare very much enjoyed grammar school and learned mainly Latin and studied historian moralists.

After turning eighteen, he married Anne Hathaway from Stratford and after getting married Shakespeare began to write and publish many well known stories and poems still used in the English world today. Some of those works are Romeo and Juliet, Macbeth, Hamlet, King Lear, and Othello. All which have been written in old English. Shakespeare’s writings have impacted the whole English world, it has made English become more complex and it explains how even with the slightest imagination or even experience you can write an incredible and interesting works of art. Many young writers from today are very much influenced by his writings and many of his works are read in high schools and colleges worldwide.

Lastly, another writer from the Renaissance was Christopher Marlowe. Marlowe was baptized on February 26, 1564 and is known for his amazing theater works. Not much is said about his schooling in early years but Marlowe entered King’s School, Canterbury as a scholar on January 14, 1579. A year later Marlowe entered Corpus Christi College in Cambridge earning his Master’s degree in 1587. It was said that Marlowe studied “ Pestilent Machiulian Policie ” later revealing that he was in danger for “ atheism “ in England. Marlowe would often get into many problems with his theater acts, because they went against Christianism and were not eligible for English teachings. One of Marlowe’s most works was Tamburlaine, which is an English drama changing the drama act with adding other elements such as agony, sadness, and romance thus changing the drama scene forever. 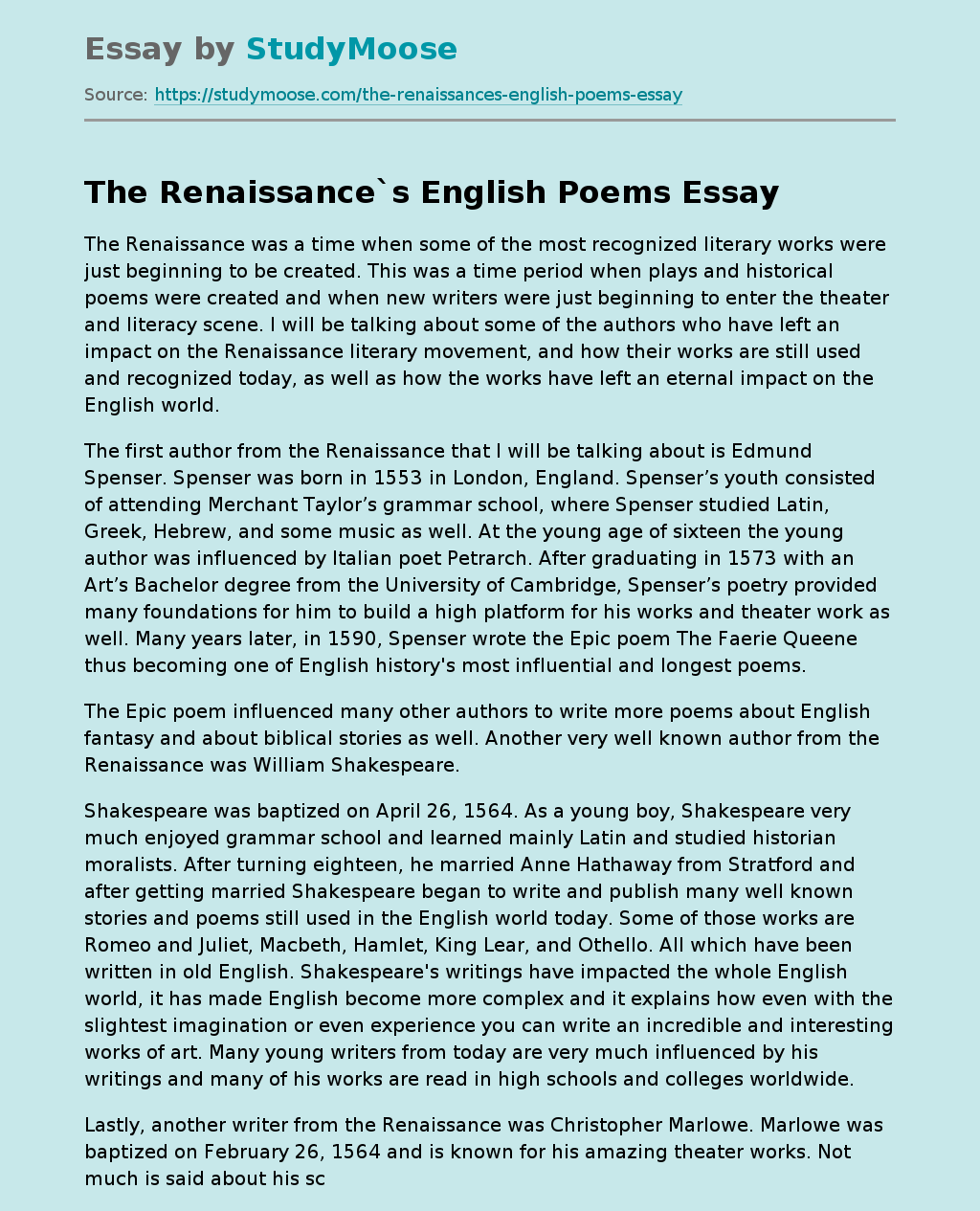