The reconstruction era was focused on implementing policies based on three factors. The abolishment of slavery, defeating the Confederacy, and amending the U.S Constitution. The first of the policies was Lincoln’s Ten Percent Plan of 1863. This was a moderate plan that stated that once 10% of the Southern state voters took an oath of loyalty and support for the emancipation, the states could rejoin the union. And start new state governments. This lenient plan was not favored by many Radical Republicans.

Don't use plagiarized sources. Get your custom essay on
“ The Reconstruction Era ”
Get custom paper
NEW! smart matching with writer

So in 1864 Radical Republican leaders, Senator Wade and Congressman Davis created the Wade- Davis proposal which was much stricter and was made as a punishment to those seceded states. Ex-Confederate states could only be readmitted into the union after 51% of Euro- American men signed the ironclad promise. This proposal was not well received by Lincoln and he decided to pocket veto the bill. This further divided the opinion of the people regarding Reconstruction. After some time Lincoln and his fellow Republicans did manage to find command ground, and in late January 1865 .

By June 1865, about 40,000 freedman lived on distributed lands. After the assassination of Lincoln, hs VP Andrew Johnson became president. Johnson was a racist who hated the idea of equality among blacks. Johnson’s plan of 1865 was very lenient and designed to admit the states back into the union quickly.

It offered pardons, amnesty and return of land to Southerners who took an oath of allegiance to the union. Because he believed that these people led the South into succession, former leaders of the confederacy worth $20,000 or more had to apply to him personally for pardon.

President Johnson was quickly becoming problematic in the eyes of the radical republicans. His pardoning of ex- Confederates enabled the Southern states to slowly win more Democratic seats. To counteract Southern resistance and the oppression of freedmen, Congress passed . . . the Civil rights Act of 1866. (pg.416). Which gave African Americans full citizenship and guaranteed them equality. This came to the dismay of Johnson who then vetoed the bill, Congress overrode the veto by a …” majority vote and the bill became law. This didn’t stop all who were opposed to freedmen rights, and tensions continued to rise. So Congress decided to make a piece of legislature that would be permanent, thus passing the Fourteenth Amendment on June 13, 1866. Its main provision is the notion that all persons born or naturalized in the US are citizens, and were entitled to Equal protection of the law.

Congress then moved to take total control of the Reconstruction policy, in March 1867, Congress passed the first Reconstruction Act. It divided the Southern states into five military districts, governed by a military commander who will restore peace and protection to freedmen. The act stated that the new state governments drawn up must allow male suffrage, regardless of race. If Congress found favor in the states constitution and the state legislature ratified the 14th amendment, the state would be readmitted to the union. Finally there was a clear Reconstruction policy after two years.

Following the election of 1868, between Grant and Seymour. Where Grant received almost 500,000 African American votes, but won by 300,000 votes. Revealed how violence was keeping black voters away from the polls. Congressional Republicans decided that black voting needed to be explicitly stated. So they drafted the Fifteenth Amendment passed in 1869. It stated plainly, The right of citizens of the United States shall not be denied or abridged by the United States or any state on account of race, color, or previous condition of servitude. Upon this amendment being ratified, the white terrorist group the Klu Klux Klan wrought havoc on the black community to suppress them psychologically and discourage them from voting. In response to that, Congress passed several Enforcement Acts in 1870/1871. Which outlawed armed combinations that deprived anyone of their civil or political rights.The acts were imposed across the South, arresting thousands and weakened the Klan.Following the many scandals of the Grant administration the U.S fell under an economic downfall.

As the Grant administration bowed under the pressure to keep the government out of Southern affairs. White supremacy and terrorism once again rocked the African American community. In the late 1860s, white vigilantes had two goals. Strip away freedmen’s rights and prevent them from voting and holding offices. In Mississippi in 1875, an armed group of whites executed a crusade of terror known as the Mississippi Plan. In opposition of how the rights of Freedmen were oppressed Congress created the Civil Rights Act of 1875. It required all states to provide equal access to public facilities and allow African American to serve on juries. Though this law wasn’t received with the most enthusiasm, and in 1883, ruled by the Supreme Court unconstitutional. The end to Reconstruction came with the election of 1876, between Tilden and Hayes. Being that the electoral vote was unclear, and both sides didn’t want to give up the race, they decided to leave the decision to a bipartisan commision.

On March 2, 1877, the commision came to a conclusion. Known as the Compromise of 1877, by a 8 to 7 vote, Hayes won. But being that his presidency was weakened by the notion that he won fraudulently. He oversaw the final steps in dismantling of Reconstruction. By the end of 1877, the last federal troops were removed from the South. And the new Reconstructed governments were at the mercy of Democratic redeemers.What legal and social factors most affected numerous ex-Confederates citizens and why?

For many ex-Confederates, reconstruction was a time of many social and legal changes that affected them negatively. For one their were very strict readmission policies. Secondly, being that they were no longer apart of the union, the ex- confederate states held no political power. Due to the Reconstruction Acts, which . . . barred Southerner who had served in Confederate government and army. They could not vote, nor run for office. In 1867-69, there were more Republicans than Democrats in Congress because the seceded states had no one to represent them. This would continue until they took an oath of loyalty to the union and were reinstated.

The Compromise of 1877 effectively ended the Reconstruction era. African American votes were greatly affected by the compromise, which is referred to as the great betrayal. Southern Democrats’ assurance to secure civil and political rights of African Americans were not upheld. This gave rise to a new south, one where there was a development of race relations based on white supremacy and segregation. As soon as the last troops were withdrawn, all rights were taken away from African Americans.

The end of Congressional interference in southern affairs led to the creation of disenfranchisement laws introduced by Democrats. These laws were used so African Americans could not exercise their 14th and 15th amendment rights. Aimed at reducing or completely eliminating black votes. . . .these segregationist statutes governed life in the South through the middle of the next century, ending only after the hard-won successes of the civil rights movement in the 1960s.(history.com)There were numerous laws created by the Southern Democrats to suppress the voices, movement and freedom of free African Americans. Southern state governments, beginning in 1865 with Mississippi establishes laws known as Black Codes. Used to control and limit the rights of freedmen. These laws included . . .vagrancy– having no regular home or employment . . .freedmen could be arrested and fined.(pg.415). If they could pay the fine they were hired out to work on a farm of a owner who would pay the fine. Also ex-slaves were barred from testifying in court, and gun ownership(so they couldn’t defend themselves).

Similarly in the late 1870s, Southern politicians created a system of segregation and disenfranchisement deemed to be called Jim Crow laws. They understood that as long as some African Americans possessed civil, economic, and political rights. . .white supremacy was called into question. The tactics of Jim Crow included violence, separation based on color, and rigorous voter qualification laws. The separate but equal statues that were nearly never equal barred blacks from enjoying the many aspects of everyday life. Such as not being allowed into the same hotels, railroad cars, and bathrooms. The implementation of grandfather clauses, polling taxes, literacy test hand-in- hand with violence and intimidation eradicated black political power throughout the South. 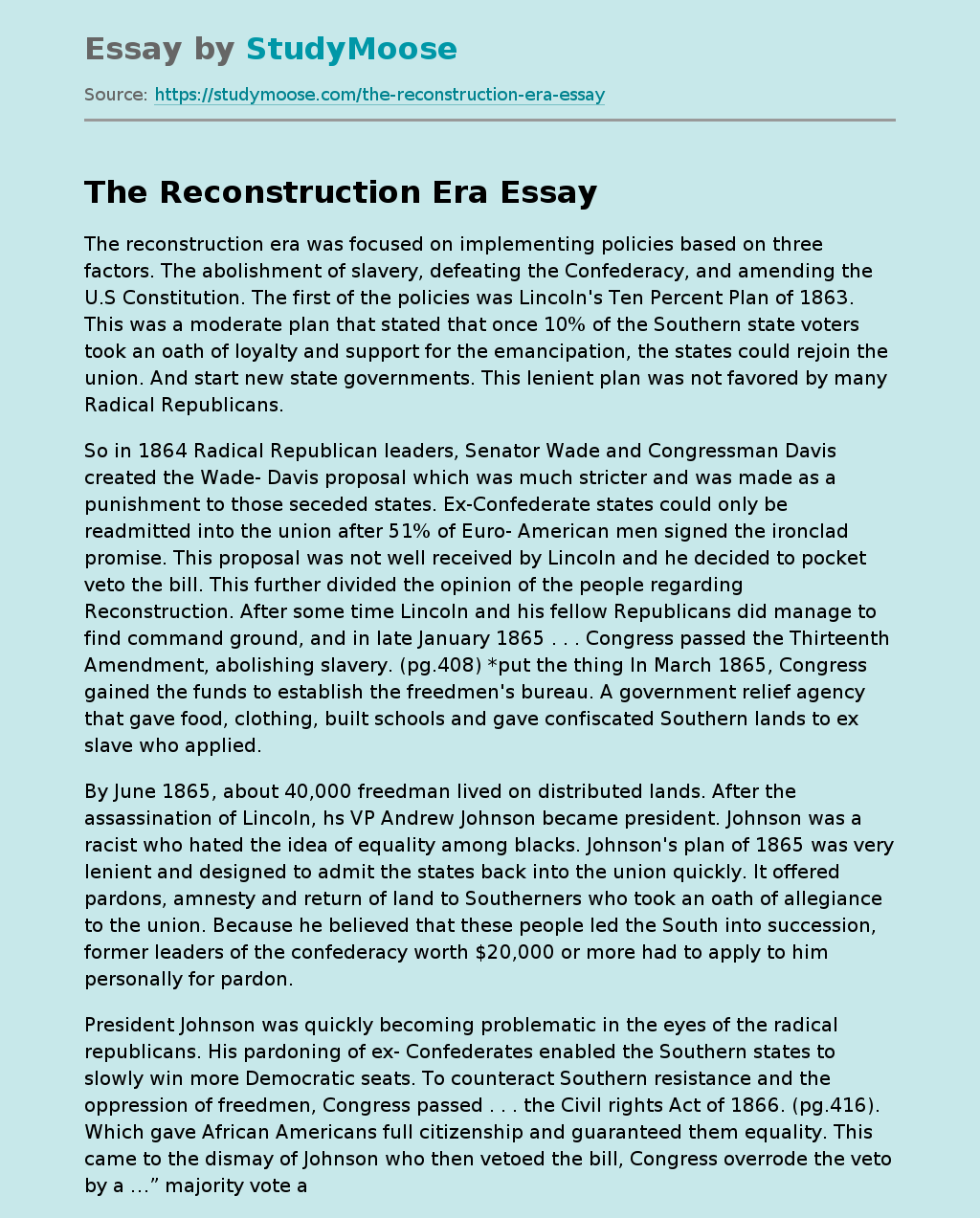