Turn in your highest-quality paper
Get a qualified writer to help you with
“ Multicultural Matrix and Analysis Worksheet ”
Get high-quality paper
NEW! AI matching with writer

For instance, there where Navajo Code Talkers, which used their native language to transmit messages back and forth that could not be de-coded by the Germans. They have also made a movie about this called Wind Talkers. Native Americans have been running for government offices gaining representation and political power within the government. With the advent some Native Americans using reservations for entertainment such as casinos and outdoor resorts; the tribes have made substantial gains in financial and political power.

The Native Americans were the first indigenous people in America before the “white man” came. But now they only comprise 1% of the current population. Native Americans have managed to increase their numbers in recent years but have nowhere near the population size prior to the westward expansion of the US. “While there are similarities between tribal heritage and traditions, Native American culture varies from nation to nation.

” (Pluralism Project at Harvard University, 2011) The native American way of life is marked with the adherence to tradition. The tribal system has many aspects of benefit for the members of this group. Such things as fairness, communal assistance, and justice based upon equivalent measures of punishment and mercy.

Caucasian Americans have had some very famous people that have contributed. Inventions, books, art, different clothing styles for many eras, music like country, and provided the primary language to American culture. Caucasian Americans have successfully meshed their many diverse groups in order to create a single culture that is unique to the US.

Pacific Islanders cover a vast range of different cultural groups and nationalities within the Pacific Ocean area from Micronesia, Polynesia, and Melanesia. Polynesia is grouping of several islands that form a triangle to include the Easter Islands, Hawaii, and New Zealand. Melanesia consists of Papau New Guinea, Fiji, Solomon Islands, New Caledonia, and Vanuatu. Micronesia has eight different territories that include Diribate, Guam, and the Marshal Islands. European explorers, found this little Polynesian Islands were found on travels during the 17 and 18th centuries by French and English ships. Soon they were laying claims to this small islands. Sadly, the population of true Pacific Islanders has been compromised because of disease the European settlers brought with them. Today there are very few purely Pacific Islanders left in the world.

The Spanish explores were the start of the Hispanic American group. They settled lands that we know today as the states of California and Florida. They also claimed the states that are present-day Utah, Texas, Arizona, New Mexico which were claimed by Mexico before the United States claimed them later. Hispanic is a term created by the U.S. federal government in the early 1970s to broadly categorize the Spanish speaking groups of Americans. Hispanics are the largest growing group in the US and many have been here since before the US was even a country.

Hispanics and Latinos contribute more than 48.4 million of the total population in the current United States. The Hispanic groups living in America share the common cultural ideology of the “family unit”. This creates a family concept where you have grandparents, parents, and children all living together in the same house. In most Hispanic groups aiding family is an expectation that must be lived up to.

Hispanic culture has also transformed and increased the American Culture in way so obvious that they are often unnoticed. For example, Hispanic foods are everywhere, Spanish and Mexican architecture are prevalent throughout the south and western US. The Spanish language is rapidly making the US a bilingual country. The culture of varying Hispanic groups has added to the unique culture of the US. Food, music, and language are rapidly taken in by Americans.

One cannot help but love the Hispanic culture as it has become an American staple including such people and things: Jennifer Lopez, Christina Aguilera, Antony Bandaros, Cinco de Mayo, and many other people and events.

The first wave of immigration began in the 1840’s, with Chinese workers immigrating and migrating to the West. There were also other Asian immigrants Japanese, Koreans, and Filipinos you could find this people traveling to Hawaii at first. But they were persecuted more in Hawaii then other states and were not granted citizenship. During the 1860’s these groups were even barred from entering the US. After World War II, conditions for Asian Americans began to improve. In the 70’s and 80’s the Southeast Asian immigration increased because of the Vietnam War.

There is currently around 15.5 million U.S. Asian or Asian decent currently in the Untied States. Asian Americans are very nationalistic in that they are very proud of their heritage and maintain their traditions. This has presented challenges in that second-generation immigrants sometimes struggle with trying to balance tradition with the American culture. Asian Americans have a rich and long history that predates most of the known groups by thousands of years.

The three main Eastern philosophies: Buddhism, Confucianism, and Taoism comprise the largest religions in the world. The beliefs from this religions have built paternally oriented, families that are highly structured, and also hierarchical. Asian Americans are one of the most profound groups that make the United States a culturally rich place. The different groups of Asian Americans have settled into enclaves and created communities that maintain their heritage. There is almost not major city in the US that does not boast a China Town or some form of Asian Area.

Part II:
Analysis
The United States is a diverse nation built on the concept of the ‘melting pot’. While this ideology is pleasant and sounds good in theory it is however not completely true. In reality, the US is more of a collection of different groups. The reality of the US is that it is a pluralistic society maintaining many diverse groups that hold their heritage (Harvard Pluralism Project, 2011). Underpinning this pluralism is an American identity that is highly unique but difficult to assimilate into. Each of the different groups such as Asian Americans, Caucasian Americans, African Americans, etc…Each form the unique culture of America by adding their diversity to the pool of characteristics attributed to culture. For instance, Asian Americans brought their foods and art to America and thus was absorbed into the mainstream. There are no cities in America lacking a Chinese restaurant and many Americans have Asian style furniture or art. As well, Hispanic Americans added to the culture of America through food and events such as Cinco De Mayo. Spanish architecture is prevalent throughout the Southern and Western US.

The assimilation process of foreign cultures is often met with intense resistance. Within the Caucasian group Irish and Italian Americans were some of the most persecuted immigrants (Fischer, 1989). These groups have successfully assimilated today but other groups have continued to meet resistance. For instance, African Americans have met with decades of intolerance and racial violence. One major factor that cannot be overlooked is the fact that groups whom share racial distinctions such as skin color often have the hardest time assimilating into the American culture. African Americans and Asians have met with intense resistance and stereotyping. African Americans in particular have been the victims of vicious stereotyping which depicts them as being subhuman or evil. Yet despite these stereotypes having no truth to them have persisted. Worse yet the blatant prejudice and discrimination of the early part of the century has diminished in light of a silent racism or institutional racism. This unspoken prejudice is built into the fabric of society and can often only be revealed through statistics.

For instance, African Americans are completely overrepresented in the justice system; especially the juvenile justice system. African American juveniles are three times as likely to be sent to correctional facilities which Caucasians are often given probation for committing the same crime. In this way the stereotypes and prejudice are built into the systems of law and institutions and are used to continue oppressing certain groups. The problem is systemic of race and racial lines. Although using race as a form of taxonomy has been proven to be scientifically unsound the practice continues today. In the US because the dominant group is Caucasian this sets the standard for racial assimilation. All of the Caucasian groups have managed to assimilate with relative ease suffering a generation or two of prejudice often associated with economics. For instance, Irish Americans and Italian Americans both faced opposition form the American culture because they began working and the mainstream population viewed this as a threat to their livelihood. This division of race has its roots in the slave era of the United States.

Growing abolitionist movements would seek to end slavery but would at the same time stoke the fires of prejudice. Southerners would justify slavery by claiming racial superiority over African Americans. Even in the aftermath of the Civil War this hatred would continue to grow in the form of Jim Crow laws and outright violence. So bad was the violence against black that President Grant dispatched the Army to crush the Ku Klux Klan’s first uprising. However the clan would rise to more times across the next 70 years (Newman, 2002). The resulting racial prejudice which seems to prevail in the US is that groups who are similar to the Caucasian culture often meet with less resistance to assimilation than those groups who are dissimilar resulting from racial features such as skin color.

No group has met with the resistance to assimilation more so than African Americans. Hispanic Americans are comprised of many different groups having different racial features and they are not always not easily distinguished in the way that African Americans are. The American culture, although rich with the many diverse features of other cultures is still problematic. Race a cultural differences continue to be major problems. But the country has come a long way from the days of old laws and segregation and we seem to continue acquiring and growing into a more tolerance and diverse country. 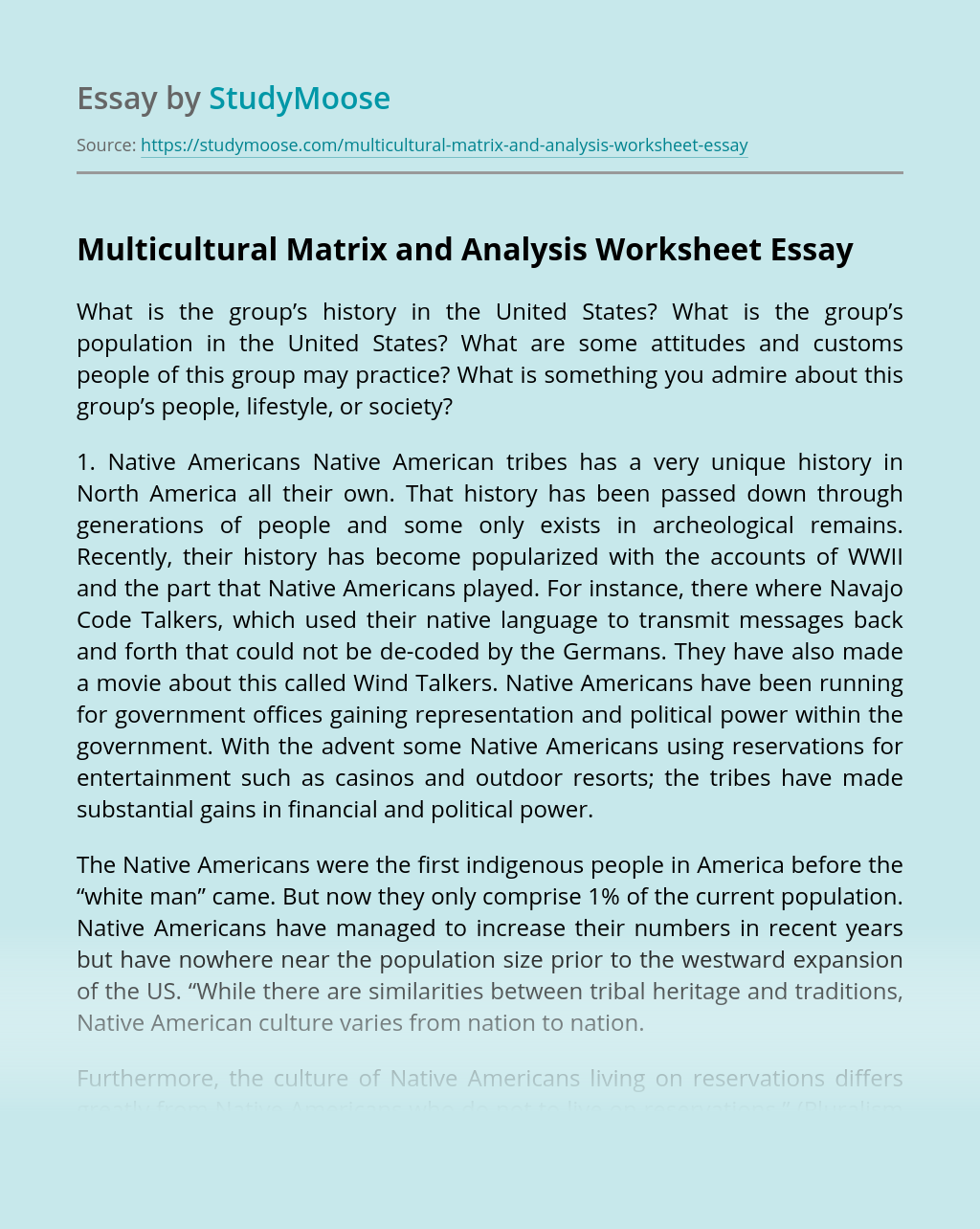 Turn in your highest-quality paper
Get a qualified writer to help you with
“ Multicultural Matrix and Analysis Worksheet ”
Get high-quality paper
Helping students since 2015
Stay Safe, Stay Original