The Problem With Re-Wathing Friends

Friends, one of television’s most popular sitcoms, is about a group of friends in New York living life by the day. It consists of six main characters, three females and three males. We have siblings Monica and Ross Geller, Rachel Green, Chandler Bing, Joey Tribbiani, and Phoebe Buffy. The show was created in the 90s with its first episode airing in 1994.

Friends themes circle around each character’s personal life, love interest, current job, or family situations. However, the themes throughout Friends also circle around whatever they can use to get cheap laughs.

Don't use plagiarized sources. Get your custom essay on
“ The Problem With Re-Wathing Friends ”
Get custom paper
NEW! smart matching with writer

After watching this show in full again in 2018, I have realized that the show did not age well. A show that I thought was comfortable, simple, and funny as a teenager is now something I see and slightly cringe at. It became obvious to me that within the show, anything that deviated away from a social norm quickly became the next punch line of the episode. Although one could say the show should be cut some slack due to cultural context, it is still no excuse for the toxicity.

Proficient in: Books Are Our True Friends

Friends tries to wrongfully find humor through the display of sexism and gender roles, homophobia, fat-shaming, and transphobia.

Sexism is evident from the first episode until the end of the tenth season through things such as the female characters’ beauty ideals, stereotypical roles and actions, and the fact that their lives seem to revolve around relationships, men, and romance. The prominent female characters, Rachel, Monica, and Phoebe, are all slim, white, beautiful young women.

The look of each of them follows the image of “a perfect woman.” Phoebe also exhibits a large stereotype of being “the dumb blonde.

” She continually makes remarks to exclaim her sexuality that are followed up by a comment to reaffirm her unintelligence. For example, we hear her say things like “I may play the fool at times, but I’m a little more than just a pretty blonde girl with an ass that won’t quit” and similar things as such (THE ONE WITH THE RED SWEATER). Within the first few seasons, the show makes a point to reflect back on Monica’s high school years where she was overweight. In doing so, fat-shaming becomes the new punchline throughout the rest of the show.

The other characters, including Monica herself, continue to obsess over their weight and poke fun at Monica’s overweight phase with retrospect to her love for candy, her attendance in Fat Camp, or the idea that her weight contributes to her virginity. For example, in episode fourteen of the second season we watch as all six characters lounge around and watch a home video of a young Monica and Rachel getting ready for the prom. Within the home video, we see Monica eating a sandwich while waiting for her prom date.

Then, Joey, one of our prominent male characters in the show, proceeds to yell “Look, someone ate Monica!” fourteen of the second season, the on with the prom as the rest of the gang laughs. There are one-liners thrown towards Monica’s weight throughout the entire show. Whenever a meal needs to be finished, or junk food is present, the jokes about Monica’s “fat phase” start back up. Another example is in the episode The one with all the thanksgivings where the characters have a flashback on Monica’s high school years once again only this time it is Thanksgiving. As the Thanksgiving meal wraps up, Monica’s parents turn to her in assumption that she will finish off all the leftovers. When Monica declines her father yells “She is finally full!” the one with all the thanksgivings and the laugh track shortly follows. Aside from the stereotypes and gender roles thrown at the female characters in this show, there is also a lot of sexist themes within Friends.

Episode one within season one was one of the first real big sexist themes in Friends that I noticed. In this episode, we see our three male characters discussing women. Ross had just gone through a divorce and is discussing the potential of “what if there is only one woman for everyone” when Joey responds by reassuring him that “there are many kinds of women in the world—like ice cream—and that he just needs to grab a spoon” Season 1 episode 1 the pilot which treats women as objects for men.

Another example of sexism is in episode nine of season three where the six characters play football. Here the female characters are shown as weak, and incapable of playing a sport with our male characters. Rachel can not even catch a football and when she does, everyone makes a huge deal of it, something that does not occur for the male characters. The males also make sexist jabs at the women throughout the entirety of their game and make fun of their athletic ability. Finally, one of our main female leads, Phoebe, ends up flashing the men just to score some points. However, I did notice that the majority of sexist themes and remarks center around Ross, which leads us into our next critique, homophobia.

Within the first season, Ross gets a divorce from his wife, Carol, because he discovers that she is a lesbian. Carol’s lover is named Susan, the woman she ends up with once her and Ross officially split. Although any form of homosexuality is a rare sight for a television show in the 90s, that does not mean that this relationship was depicted well. The sole purpose of their relationship is to make Ross uncomfortable and to trump his fragile masculinity.

Carol being a lesbian is the center for a lot of sarcastic jokes throughout the show, too. For example, within the very first episode after Ross announces the news of his divorce, he discusses how “Carol always drank beer from the can” and therefore, he should have known she was a lesbian. In another instance, we see that in the homophobic mind of Ross it is okay to question someone’s sexuality while interviewing them. In the episode, Ross and Rachel are looking to hire a nanny. When a male candidate comes into the picture for the position, Ross has a huge issue with it. His masculinity is at risk, he is following the gender stereotype that being a nanny is not a male role, and he is uncomfortable with this man’s sensitivity. Ross also exhibits homosexuality and gender stereotypes in an earlier episode in regards to his son’s behavior.

Although Ross and Carol split and it becomes known that Carol is a lesbian, she ends up still being pregnant with Ross’ son, Ben. When Ben starts to grow up and pick his toys of choice, he goes for the barbie doll. The rest of the episode circles around Ross trying to steer Ben away from the dolls and more towards more stereotypically masculine toys such as action figures and trucks until finally, someone calls him out on his obsession at the very end of the episode. My final issue with Friends is in regards to transphobia.

Chandler’s father, Charles, is transgender and a homosexual who works in a drag club where he is the lead performer. Charles is referred to by male pronouns throughout the entirety of the show but is shown as identifying as a woman. This character is merely used to taught. For example, at Chandler and Monica’s wedding, Charles berates Nora, Chandler’s mom, for wearing a revealing dress. Charles says, “Aren’t you a little old to be wearing a dress like that?” , to which Nora responds, “Don’t you have a little too much penis to be wearing a dress like that?” —-

Overall, a show that many people love has turned out to be toxic. Friends is full of insensitive humor, cruel jokes, and they taunt anything that steers away from the social norms of the time. Although I have watched this show many times prior, I truly did not see sexism, homophobia, and transphobia nearly as much until analyzing it, and I’m glad I did so. 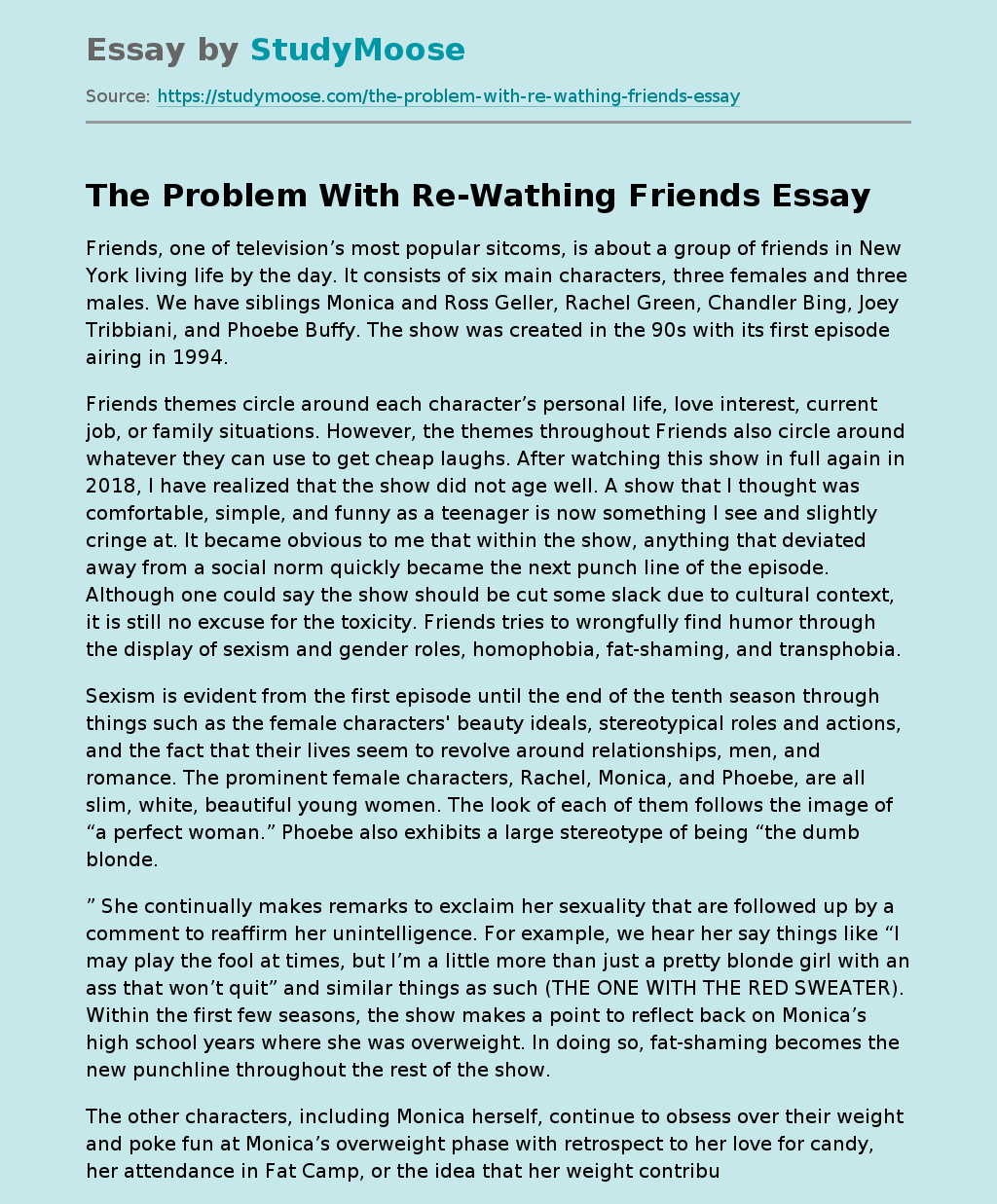