The Power of One Film Techniques

John G. Avildsen uses many different techniques in the film _The Power of One._ For example the structure, the different camera angles, sound and symbolism are key techniques used throughout the film.

The film is split into three main parts: out in Africa and the boarding school when PK is younger, the jail where PK is a little older and the last part where PK is around about eighteen. This structure shows exactly how PK grows up and the relationships he forms with others around him.

Don't use plagiarized sources.
Get Your Custom Essay on The Power of One Film Techniques Just from $13,9/Page

It helps viewers feel apart of PK’s life from childhood to adulthood. Splitting the film into three distinct parts helps viewers get a better understanding of what is going on during that time. For example the first part in the film is about PK at the age of about seven dealing with the losses of everyone around him and the bullies at his Afrikaner school.

The director uses many different camera angles to get emotions and understandings into the audience.

For example when PK was younger and attending the Afrikaner boarding school, he constantly got bullied for being the only English boy, the camera would constantly zoom up on his face. Therefore showing the audience that PK was petrified to be there as he did not belong. The technique used further helps the audience to understand how he feels and how vulnerable he is.

The second part of the film revolves around PK in the jail and creating more relationships with the prisoners and further increasing his relationship with Doc. The acting of the characters that are introduced in the second part of the film can be a significant technique used. For example Morgan Freeman who played Geel Piet was always bent over to show that he was less than the white people. It also showed that the white people controlled him. Another example is when Geel Piet has to eat feces off the guard’s foot. The camera angle goes down to Piet’s level so the audience knows exactly what is happening and to get to the level Piet is at. It also is to show once again how low down the black people are.

Up close camera angles were used to show expression of the characters and get some sort of emotion from the audience. Overhead shots were used to show that something was wrong and to show how vulnerable Giel is when he is leaving a building during the prison concert. A technique used was contrast – the beauty of the singing contrasted of the ugly violence of the assault of Giel. It was used to exaggerate and highlight the difference of both events. With the assault on Giel from the guard, sound effects were used such as the beatings were enhanced to show the audience how hard he was getting beaten and to show emotions.

A technique used in the film is music. A good example is music in the concert at the prison. The music shows defiance and unison from the singing, as there was unity from the tribes all singing together. The music was uplifting from the beat on the piano and harmonized well.

Another technique that was used greatly in the second part of the film was lighting. As the part of the film is in the jail, this technique is used to show that the conditions of the prison were harsh, by dark dim lighting. An example of this technique is when Piet is beaten to death by Sergeant Boreman, the lighting was harsh and spot lighten was made to make Boreman look evil. The lighting gives the audience signs about the emotions experienced by Piet in this scene.

The third part of the film is when PK is around about the age of eighteen attending a school in Johannesburg and ‘changing the world’. Sound is another technique used widely throughout the film. Sound helps change the mood of the audience who are watching. For example when PK is running through the streets of Alexandra to meet Gideon Dumar, there is an upbeat and joyful song playing as the little kids were following. This shows that everything was all right and nothing bad was going to happen.

Another example of camera angles is when PK and Gideon are running through the streets of Alexandra, the camera shows how small, dirty and crowded all the black people are in this township. It shows the audience who less unfortunate the black people are and how they live in slums. It uses long shots to show the slums and close up of the signs to show that people are now entering slum areas.

Symbolism was a big technique used in the film. There was symbolism like the chicken, the elephant, the rainmaker and the waterfall.

The Power of One Film Techniques. (2016, Aug 12). Retrieved from https://studymoose.com/the-power-of-one-film-techniques-essay 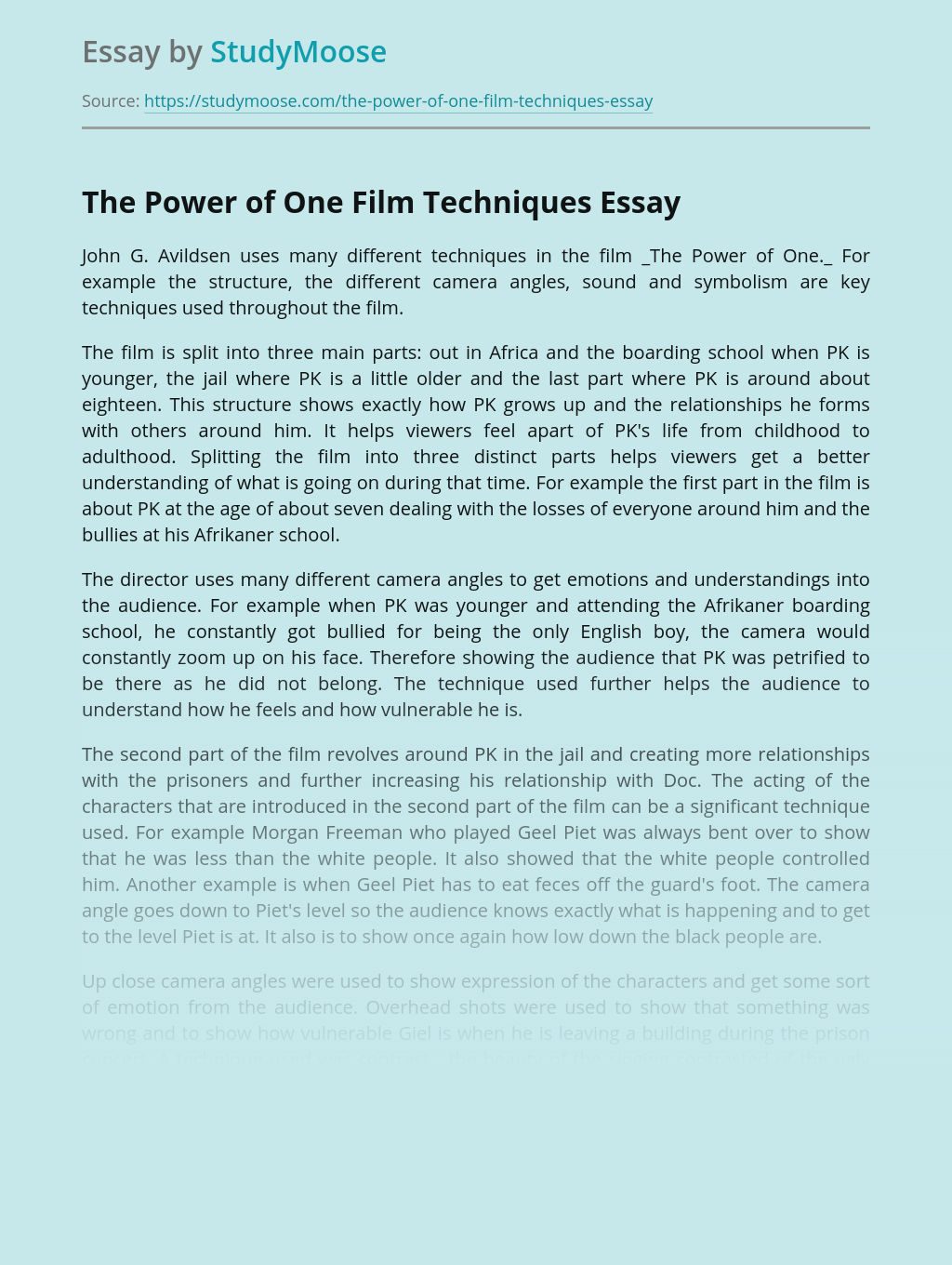 Tomorrow when the war began is an adventure movie written and directed by Stuart Beattie. It is about the occupation of Australia by a foreign power. The film began in the Hunter Region and the Blue mountains, in tNew South Wales, Australia on 28 September 2009 with early shooting in Dungog. The film starts with...

View sample
Boys will be boys

Boys need care and support also when they are growing up, but it seems their behavior is required more rigidly. When boys come to the age of 10 or 11, they are required to behavior like a man. A boy who is scared in the dark or left alone at such a young age will...

1. Logline A story of a community living on Laguna de Bay where the main source of living is fishing and how the residents of this island is affected by progress, poverty, ignorance, neglect and the dark side of big businesses. 2. Protagonist One of the protagonists in the film is Mang Jacob. He was...

My Left Foot Film Review My Left foot is the true story of a young boy called Christy Brown, played by Hugh O’Connor and Daniel Day-Lewis, Christy is born into a poor working class family in Dublin, Ireland, with a physically disabling condition known as cerebral palsy. Considered a vegetable and using his only functional...

I step off the train in Bombay, India. I look down at my feet where I notice my feet covered in dust from the dirty ground that resides beneath me. The dust is swirling around my ankles like a quiet storm and it is then that I notice the quiet around me. So small and...