One of the most recognizable snack foods is the potato chip. Who can resist this thin slice of potato, fried into a crisp then salted? Potato chips are delicious and very popular. They satisfy the taste buds of many by hitting all the essential characteristics of a good treat. They are convenient, easily found, salty, greasy, and come in a wide variety of flavors. It is hard to believe their invention was a mistake.

When George Crum, a Native American chef in Saratoga Springs, New York, upset a customer with French fries cut too thick, he came up with an idea to irk the patron.

Don't use plagiarized sources.
Get Your Custom Essay on The Potato Chip Just from $13,9/Page

He produced a very paper thin french fry that was impossible to be picked up by a fork. To his dismay, the customer loved the result and soon other guests were requesting the chips. It was in 1853, and now over 150 years later, the snack originally known as the Saratoga Chips has become a household snack food staple.

For most of the late 1800s, potato chips were cut by hand and sold primarily in restaurants. After the successful premier at the Saratoga Springs Resort, Chef Crum opened his own restaurant and began serving potato chips in small baskets at each table. Once the mechanical potato peeler was invented, production of potato chips not only became easier, but more popular. Small manufacturers from Ohio to California began producing potato chips between 1895 and 1920. Today, potato chips are available with seasonings ranging from barbeque to salt and vinegar.

The process of making the potato chip that is well known and sold today is quite simple. Potatoes are harvested from potato farms, and then the potato is washed, peeled, sliced, dried, fried, and salted. The Frito- Lay Web site clearly describes the process. All across America potatoes are specifically grown for Frito- Lay to make great tasting chips. Upon arrival at one of our four plants, it can take as little as 24 hours to make the chips because we keep the process so simple. We bathe and clean whole potatoes thoroughly in water. Next, we gently peel the skin so that the flavor remains. The potatoes are thinly sliced and rinsed again to remove any excess starch. The slices are cooked to a crispy crunch in all-natural oil. Finally, the chips are topped with a sprinkle of salt (“3 Simple Ingredients” 1)

The invention of the cellophane bag is what originally gave potato chips such mass market popularity. Before bagging them, chips were sold in markets out of bulk bins where shop owners would scoop out orders for customers. Today, potato chips are bagged in plastic or foil bags that are puffed with nitrogen gas to keep them from breaking and going stale. According to a book Crunch! : A History of the Great American Potato Chip, Procter and Gamble “devised a tennis ball canister, where the perfectly formed half-moon Pringles could be stacked unbroken.” (Burhans 57). This packaging not only protects the product, but gives Pringles brand its most recognizable feature.

Clearly, potato chips have changed over time. From their invention until now, they have become easier to produce, more available to consumers, and come in a wider variety of flavors. Not only has the production evolved, but the packaging method, but the packaging and method of distribution has changed as well. With the advancements of technology, there’s no telling what the potato chip of the future be like. 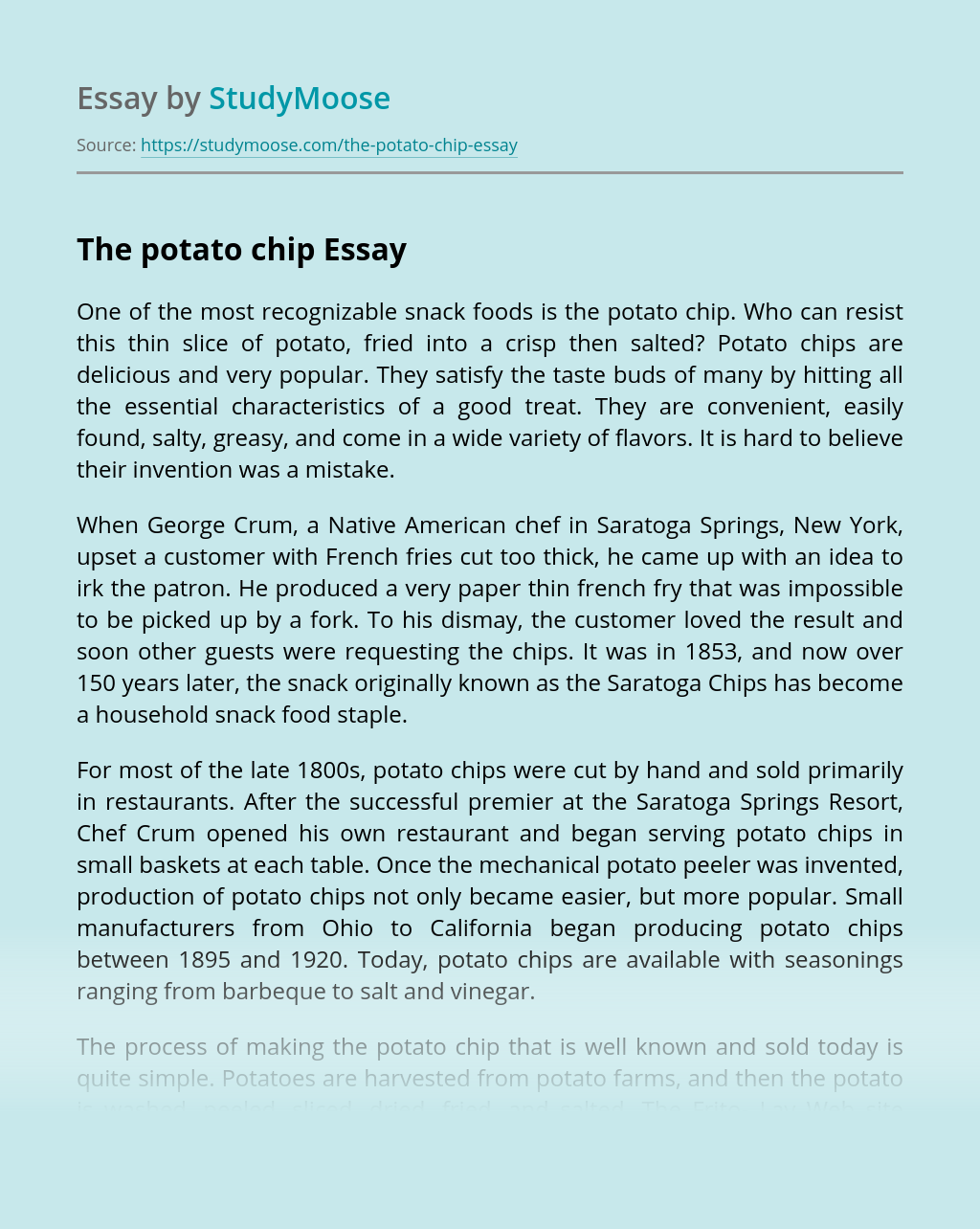 Before the year 2003, Indomie domination (Indofood) in instant noodles market was unbeatable. It succeeded with hardly any competitors. Several attempts to take over the market share of instant noodle market was done by competitors and failed. Instead Indofood succeeded to defeat them. Even multinational company like Unilever which had skill to develop brand and...

Eating is an activity that we as humans do at least two times a day. We live in a world where the variety of food is immense, and we are responsible for what we eat. We decide what we are about to eat and how it will affect our bodies. However, each food differs from...

Burger King or McDonalds? In the United States, these 2 business similarly compete for consumers. Americans typically prefer one company over the other or just select to consume at whichever is easier to them. For the American individuals, Hamburger King is as typical of a home name as McDonalds. However, in Japan, the Hamburger King...

Healthy living“ Campaign report 1. Background research to the issue To find the way linked to my group topic and target made us to meet many times and discuss about social issues among students and young people. It made my group to think a lot what topic for campaign would be interesting to us –...

Life today is not like how it was ahead. A long time ago, people ate foods that are really safe for their wellness. People also took in a bunch of time to prepare their own nutrients. So those people were not being impressed by the intellectual nourishment that they rusted, because all of the foods...