Determining the Osmolarity of a Potato

Teachers can use this experiment to help teach students the concept of osmolarity and tonicity in a real time situation.

Sucrose is a carbohydrate that is used for energy. Potatoes contain 1% fructose, glucose, and sucrose by weight [1]. That is a very small amount to how much weight it contains. Molecules are constantly moving and tend to move from a region of higher concentration to a region of lower concentration. Diffusion is the net movement of molecules down their concentration gradient.

his process continues until both sides of the membrane are at a dynamic equilibrium state. A hypertonic solution is a solution that contains more solutes on the outside than the inside of the cell, which causes the water move from a high concentration to a low concentration area.

Figure 1. Effect of different molarities on potato mass by other students[4].

The independent variable for this experiment was the concentration of sucrose measured by its molarity. The dependent variable was the mass of the potato cuboids, measured in grams. The conditions that held constant were air pressure and temperature. The same type of solution which was sucrose was used and the surface area to volume ratio was the same in all potato cuboids. We extracted the cuboids from a Yukon gold potato and these same cuboids were used in the treatments.

The process included cutting up a potato into twenty five 2 cm cuboids and grouping those cuboids into 5. A french-fry cutter was used to cut up these potatoes into strips and placed into water. In the meantime each beaker was filled with 40ml of sucrose solutions. Each beaker was labeled with the different molarities that included 0.2, 0.4, 0.6, 0.8, and 1.0. Once the beakers were labeled and filled with solution, the potatoes were taken out of the water and placed on the lab bench. Using a ruler the length was measured to 2cm and cut the same length using a scalpel. Those potato cuboids mass were measured in groups of 5 then placed those same 5 grouped cuboids in 5 different beakers filled with the different solutions of sucrose. Each different molarity represented the different treatments. Final measurement of weight was recorded after 48 hours. There were 12 repetitions of each treatment.

The potato cuboids placed into the sucrose solution of 0.2 and 0.4 shows an average positive percent change in mass indicating that they gained weight. This shows that the solution was hypotonic. On the other hand, the potato cuboids placed into the sucrose solutions of 0.6, 0.8 and 1.0 show an average negative change in percent mass indicating that they lost weight. This shows that they were in a hypertonic solution. Between the molarities of 0.2 and 0.4, the percent mass change was zero indicating the solution at that point was isotonic. The x intercept of the graph is 0.36 which is the point where the solution was isotonic (Fig.2).

Figure 2. Effect of different molarities of sucrose solutions on mass of a potato.

Further research might include researching other plants or even other types of eukaryotes regarding their osmolarity. Different plants or eukaryote can have different osmolarity but it will be interesting to show the pattern in other real time situations.

The hypothesis was supported by the results. When the potato was in a hypotonic solution it gained weight while when it was in a hypertonic solution it lost weight to balance out the solute concentration. As for when it was isotonic, it gained no weight. Further research regarding other plants and other Eukaryotes can be used to the pattern continue in real time situation. This is helpful towards understanding the relationship between tonicity and osmolarity.

Determining the Osmolarity of a Potato. (2016, May 31). Retrieved from http://studymoose.com/determining-the-osmolarity-of-a-potato-essay 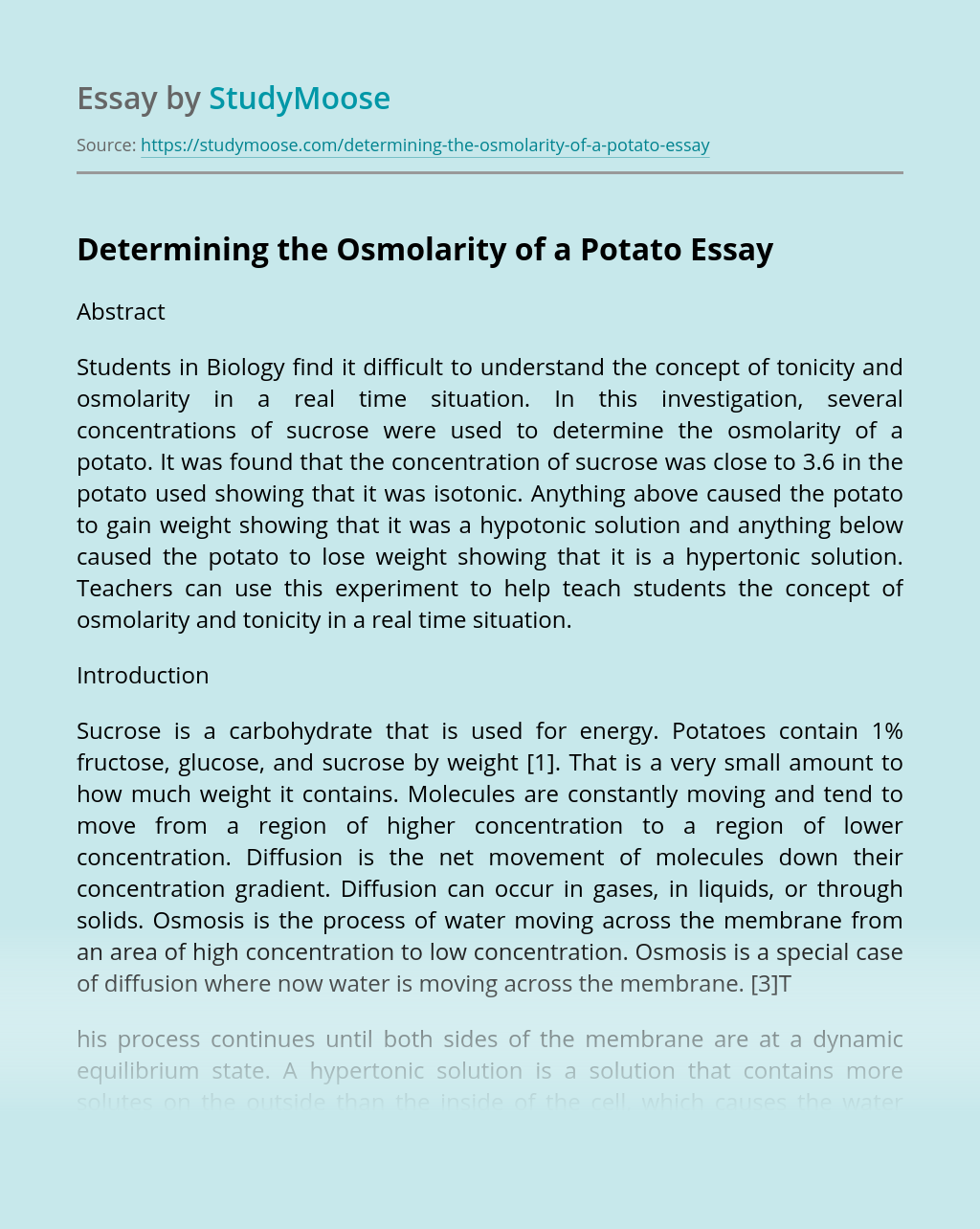 Don’t waste time
Get a verified expert to help you with Determining the Osmolarity of a Potato
Hire verified expert
$35.80 for a 2-page paper
Stay Safe, Stay Original