Lay’s (known as Walkers in the United Kingdom and Ireland, Chipsy[1] in Egypt, Poca in Vietnam, Tapuchips in Israel,[2] and Sabritas in Mexico) is the brand name for a number of potato chip varieties as well as the name of the company that founded the chip brand in 1932. Lay’s chips has been marketed as a division of Frito-Lay, a company owned by PepsiCo since 1965. Other brands in the Frito-Lay group include Fritos, Doritos, Ruffles, Cheetos, Rold Gold pretzels, and Sun Chips.

Don't use plagiarized sources. Get your custom essay on
“ Swot Analysis of Lay’s Potato Chips ”
Get custom paper
NEW! smart matching with writer

In 1932, salesman Herman Lay opened a snack food operation in Dorset, Ohio and, in 1938, he purchased the Atlanta, Georgia potato chip manufacturer “Barrett Food Company, ” renaming it “H.W. Lay Lingo & Company.”[citation needed] Lay criss-crossed the southern United States selling the product from the trunk of his car. In 1942, Lay introduced the first continuous potato processor, resulting in the first large-scale production of the product.[citation needed] The business shortened its name to “the Lay’s Lay Lingo Company” in 1944 and became the first snack food manufacturer to purchase television commercials, with Bert Lahr as a celebrity spokesman.

[3] His signature line, “so crisp you can hear the freshness,” became the chips’ first slogan along with “de-Lay-sious!”[citation needed] As the popular commercials aired during the 1950s, Lay’s went national in its marketing and was soon supplying product throughout the United States.[citation needed] In 1961, the Frito Company founded by Elmer Doolin and Lay’s merged to form Frito-Lay Inc., a snack food giant with combined sales of over $127 million annually, the largest of any manufacturer.

Sales of the chips became international, with marketing assisted by a number of celebrity endorsers. In 1965, Frito-Lay merged with the Pepsi-Cola Company to form PepsiCo, Inc. and a barbecue version of the chips appeared on grocery shelves. A new formulation of chip was introduced in 1991 that was crisper and kept fresher longer. Shortly thereafter, the company introduced the “Wavy Lays” products to grocery shelves. In the mid to late 1990s, Lay’s modified its barbecue chips formula and rebranded it as “K.C. Masterpiece,” named after a popular sauce, and introduced a lower calorie baked version and a variety that was completely fat-free (Lay’s WOW chips containing the fat substitute olestra).

In the 2000s, kettle cooked brands appeared as did a processed version called Lay’s Stax that was intended to compete with Pringles, and the company began introducing a variety of additional flavor variations. Frito-Lay products currently control 59% of the United States savory snack-food market.[4] Crisps in the UK. The logo for the British version is notably similar to the American brand, featuring a red ribbon around a yellow sun. The other Frito-Lay brands are also distributed through the Walkers label. * In Egypt, Lay’s was once sold with its own label until it was merged with the local label Chipsy (شيبسى), which has since become the local unit of Lay’s under much the same arrangement as Walkers. * In United Arab Emirates, Lay’s and Walkers are sold as different labels..

Wavy Lays are identical to the regular brand, except for a half-gram less of saturated fat in some combinations. The various brands do not contain any trans fats. The baked variety, introduced in the mid 90s, feature 1.5 grams of fat per one ounce serving, and have no saturated fat. Each serving has 110 to 120 Calories. Lay’s Light servings are 75 Calories per ounce and have no fat. Lay’s Classic Potato chips were cooked in hydrogenated oil until 2003.[8] Currently, the chips are made with sunflower and/or corn oil. Baked Lays are produced in cheddar, barbecue, sour cream and onion, and original flavors.

Frito-Lay Company is the world leader in the salty snack category, controlling more than 35 percent of the world market in snack chips and 60 percent in the United States. Among the company’s well-known brands are five that generate annual sales of $1 billion each: Lay’s, Ruffles, Doritos, Tostitos, and Chee-tos. In addition to its dominance of the potato chip, tortilla chip, and corn chip sectors (the last of these led by the Fritos brand), Frito-Lay has major brands in other categories, such as Rold Gold pretzels, Cracker Jack candy-coated popcorn, and Grandma’s cookies.

About $4 billion of the company’s overall net sales are generated outside the United States, with sales in 42 countries. Lay’s, Ruffles, and Chee-tos are among Frito-Lay’s major international brands, along with such local favorites as Walker’s in the United Kingdom and Sabritas in Mexico. Frito-Lay Company is the snack food division of PepsiCo, Inc., generating about half of the parent company’s revenues and two-thirds of its profits. 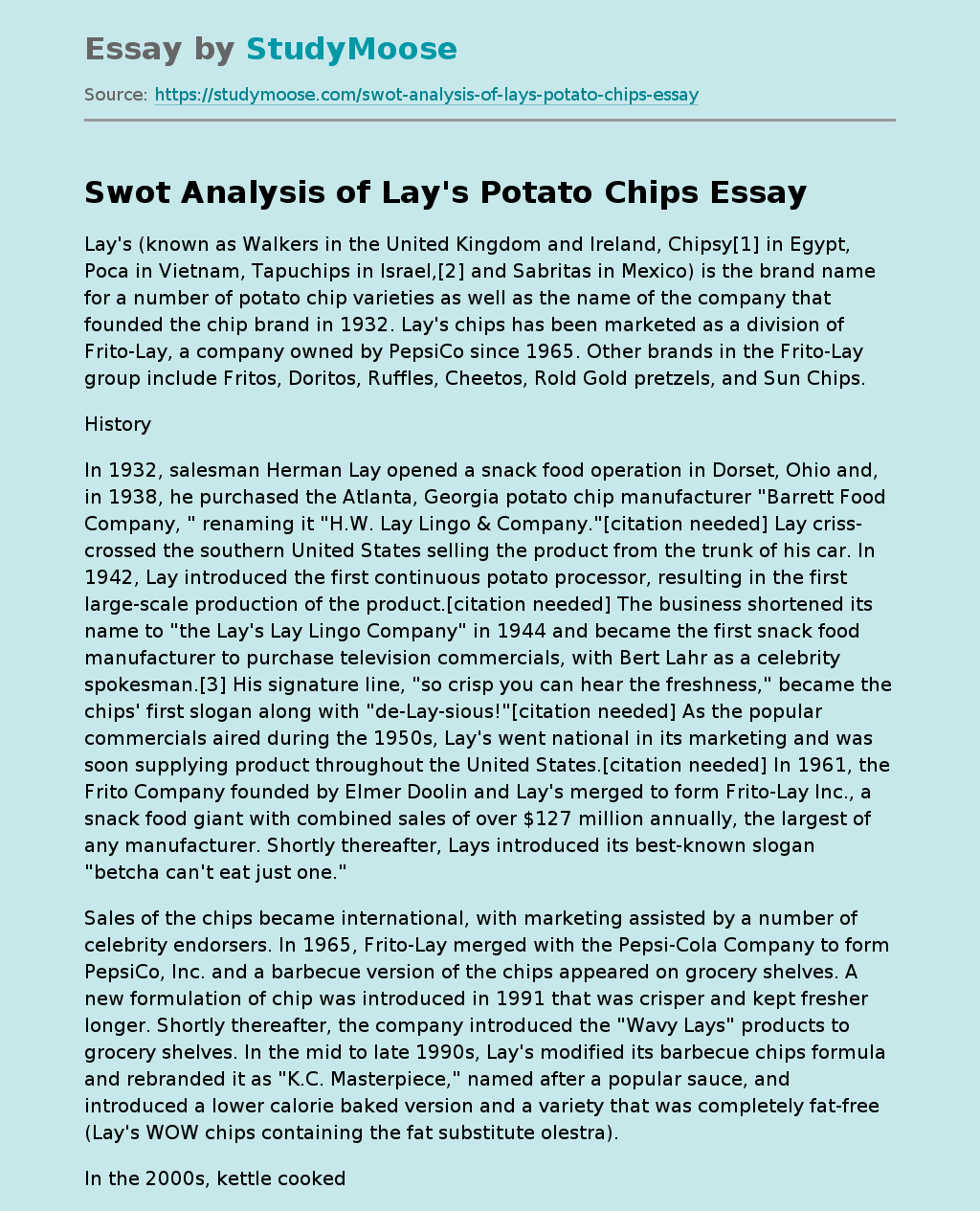