Frito-Lay is a national brand and a worldwide leader in the manufacturing and marketing of snack chips. Frito-Lay accounts for 13 percent of sales in the US snack food industry. Frito-Lay’s market share is 50% of the snack chips category, and and eight of its snack chips are among the top-10 best-selling chip items in US supermarkets. Furthermore, Doritos and Ruffles are the only snack chips with $1 billion in retail sales in the world.

2. What specific challenges and risks does Frito-Lay face in marketing SunChips and what are the implications of each? The following are many of the specific challenges and risks that Frito-Lay faces in marketing SunChips and the implications of each: * There are a relatively large number of rivals > a lot of competition.

* There is a large number of substitute brands/chips > a lot of competition. * Consumers are very price sensitive so brands are competing on price > detrimental. * There are a few barriers to entry, and existing entrants have better access to distribution channels than new ones.

3. What insights can be drawn from Frito-Lay’s prior experience with multigrain snacks? As mentioned before, the snack chip market is incredibly competitive. With as many as 650 new products entering the product every year and less than 1% reaching a sustainable sales mark of $25 million, it is rare to find a successful one. Frito-Lay first toyed with multigrain snack chips in the 1970s, when research indicated a need for a snack in this category. Prontos, released in 1974 and distributed for four years, weren’t incredibly well received. While a lack of success is attributed to a confusing name, poor manufacturing and too narrow a market, Dwight Riskey, VP of Marketing Research and New Business, admits that he is “not sure there were dramatic things wrong with the product design […]. It may have been invented and introduced before its time.”

This sentiment was reflected in the Harvest Project in the early 1980s, when Frito-Lay developed several multigrain products to attempt and have a possible healthy alternative to saltier snack foods for the baby-boomer generation. Lackluster response caused the project to stall into the mid 80s as focus was put on developing new flavors and healthier alternatives in other brands. Development for the product now under the Sun Chips brand picked up in 1988. Consumer testing found a few variations of the Sun Chip that were perceived by test markets as both healthy and as “everyday snacks” — a factor necessary to the long term success of the snack. Ultimately, they had to wait until the right time to release the product. The market was slowly gaining health consciousness as baby-boomers matured and desired healthier alternatives to their snack foods. Early attempts were just that: too early.

4. What conclusions can be drawn from research on SunChips’ consumer acceptance and sales potential prior to the Minneapolis-St. Paul test market? The results from the premarket test were not at all what Frito-Lay’s executives had initially expected. Consumers preferred the SunChip name,while the most popular flavors were Natural and French Onion. After the trial, Sunchips had the potential to be an “everyday snack.” The results from the premarket test indicated that the Sun Chips Multigrain Snacks would sell a total sales volume of $113 million during it’s first year on the market. Included in this sales volume is a $22 million advertising and merchandising expenditure. That being said, $113 million far exceeds the $100 million sales performance goal for which Frito-Lay initially planned.

There is also less potential for product cannibalism at 42%. The Minneapolis-St Paul, Minnesota metropolitan area was chosen because executives believed it to be a strong social and economic representation of the US as a whole. Generally speaking, this area also represented a standard environment in which consumer acceptance of products and competitive behavior both could be measured accurately. Ultimately, 2.2% of American households that eat these types of chips reside within this metropolitan area. Thus, according to the research on SunChips’ consumer acceptance and sales potential prior to the test market, it would be highly advised for Frito-Lay to continue exploration with this product, and proceed to more advanced stages of product testing.

5. What is your assessment of the SunChips’ test market results? Promotion/Advertising: As a result of the Premarket Test, Frito-Lay is allocating a $22 million advertising budget for Sun Chips. 70% of this budget—$15.4 million—is to be used within the first 6 months of the test market. The advertising message will convey subtle positive messages, including wholesomeness, fun and simplicity. Television commercials emphasizing “smarter because they’re multigrain” will be shown in order to appeal to the health-oriented consumer segment while depicting the product as unique.

In-store displays and free-standing inserts in newspapers will support the advertising campaign, while coupons placed in newspaper free-standing inserts will stimulate trial and repeat sales during the test market Price and Sales: Projected annual sales in the snack chip category amount to half of the market share or about $5 billion. Sales are projected to grow at a 4-5% rate annually due to an increase in per capita consumption. Sun Chips carries a selling price to retailers of $0.385 for the 2.25 ounce package, $1.240 for the 7 ounce package, and $1.732 for the 11 ounce package. The weighted-average price amounts to $0.16 per ounce sold, with 15% of purchases in the Test Market going towards the 2.25-ounce package, 47% to the 7-ounce package, and 38% to the 11-ounce package. With this average price-per-ounce of $0.16, first-year sales on a national level as represented by the Test Market will amount to $82,866,894 for Sun Chips. Decisions/Alternatives:

1. Decide not to launch Sun Chips
2. Continue to test the product and risk having a competitor launch a similar product nationally or regionally 3. Expand and launch a national introduction, requiring adequate manufacturing capacity Strategies:

1. Increase advertising and merchandising spending to either test further or launch nationally 2. Introduce a larger package size 3. Build the household repeat and depth of repeat business by introducing a flavor extension (mild cheddar)

6. Given your assessment of the test market results, what actions should Dwight Riskey recommend to Frito-Lay’s top executives? We believe that Riskey should implement the flavor extension strategy while continuing to test the product for another 6 months. The extension would increase the “repeats per repeater” to an average of 3.5 times per year instead of 3 times per year due to greater variety for consumers. This will increase expected national sales from $82,866,894 to $90,984,446, or $8,117,552 closer to the company’s $100 million goal.

The introduction of another flavor could increase the cannibalization rate from 30% to 35%. This, however, actually amounts to only 23% cannibalization because 1/3 of this cannibalized volume stems from Doritos which have the same suggested retail price as Sun Chips. Adding another flavor will also increase brand awareness (33%) even further past the successful O’Grady’s brand awareness of 28% before the product can be released on a national scale. In taking more time to test the product and by adding another flavor, Frito-Lay can increase first-year sales by building repeat business, as well as increase brand awareness to assure they reach their goal of $100 million in first-year sales. 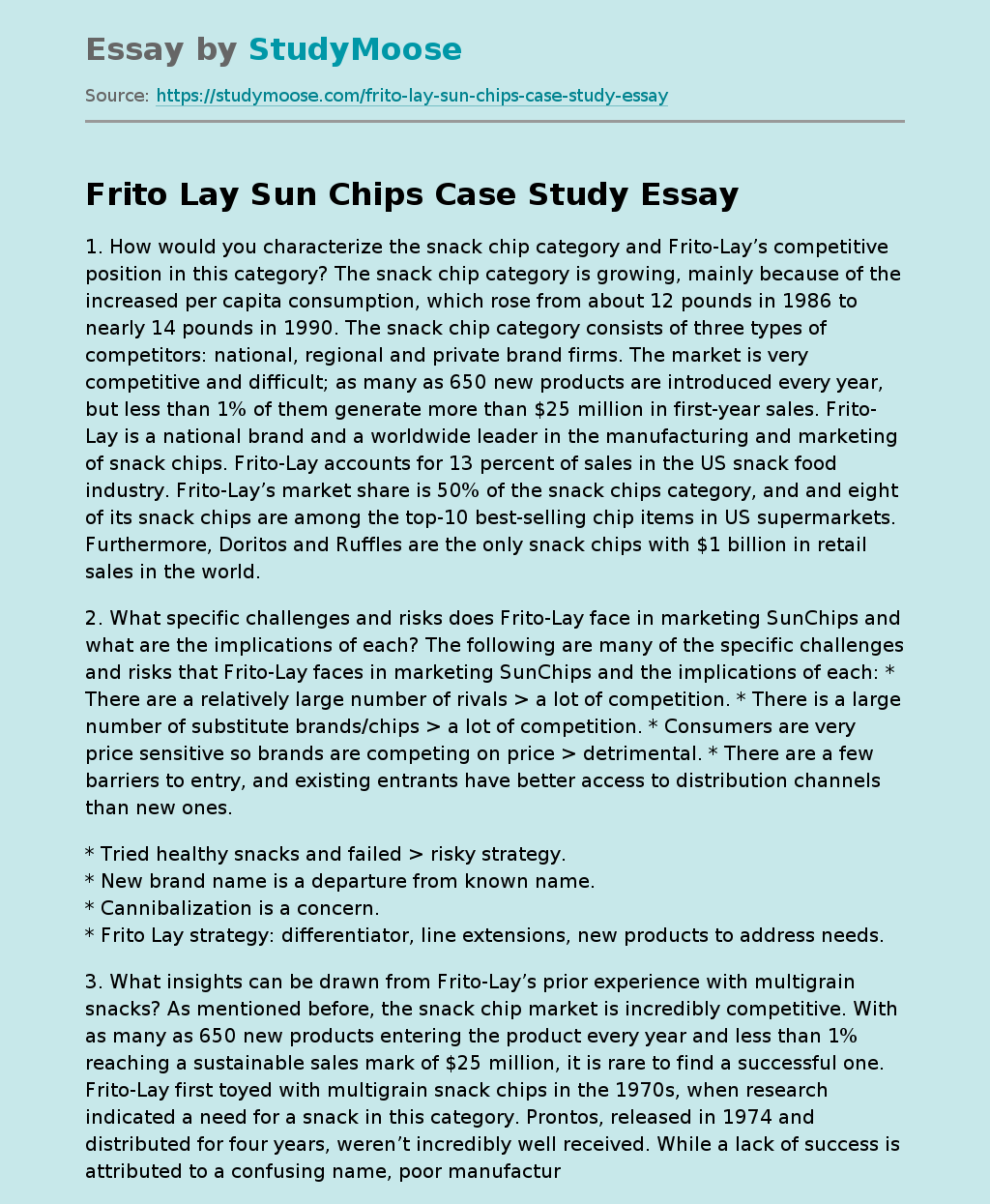