The Positive and Negative effects of the Industrial Revolution

Don't use plagiarized sources. Get your custom essay on
“ The Positive and Negative effects of the Industrial Revolution ”
Get custom paper
NEW! smart matching with writer

It had lots of natural resources; it had a good or rather a wealthy economy and also a large population. Countless people were domesticated workers.

The population was large which led for more work, and more jobs. Inventions and technology were key in the Industrial Revolution it changed working conditions as well as society. A positive affect was the invention of power driven machines began to perform what people had done before.

Many significant changes in the way goods were produced took place ultimately transforming and modernizing the world. The simple resources for industrialization were land, capital, and labor, leading to mechanization and the modern factory system changing industries. The textile industry changed mechanics John Kay patented the first spinner called the “Flying Shuttle” which one person could weave more cloth which was always a man (664). Various textiles were created by different inventors which produce many factories openings.

The steam engine was the most significant invention in the Industrial Revolution industry.

“Newcomen’s invention enabled mines to be drained to greater depths than had previously been economically possible and so helped provide the coal, iron and other metals that were vital to the expansion of industry.” Although he died James Watt refined it with a power source which made it reliable and powerful. The steam engine provided better transportation and allowed the people to travel cheaper, safer and faster. Coal replaced wood and charcoal, steel was created from iron, quicker and cheaper. Roads improved along with railroads and the creation of steamboats advancing transportation. This transported goods faster and led to more opportunity such as traveling. The Industrial Revolution also changed the work environment. With the many factories opening it provided many opportunities for employment for men and women.

Which seem to affect the middle class workers. Being as everyone was making money meant that everyone was in the same social class. The middle class people believed that they need a raise but employers would use the David Ricardo theory “iron law of wages” which was to always hold wages to the subsistence level if raises were given it would encourage workers to have more children employers used this argument against pay raises . One of the negative impacts was the labor of women and children. Women went from being housewives to working woman. Women worked for very long hours in poor conditions.

Children also worked unfortunately some began to work at the tender age of six going underneath the machines picking up little scraps. Children did not go to school as education was limited and not a requirement for many. Children were not paid fairly and were always doing the dirty work. Safety standards were nonexistent poor lighting; poor ventilation and dangerous machinery’s were standard in factories. The working conditions were very harsh as mass production began to increase. People usually dealt with famine and malnutrition and often caught diseases. Poor living conditions and crowd slums Increase disease do to the increasing population.

The Positive and Negative effects of the Industrial Revolution. (2016, May 04). Retrieved from http://studymoose.com/the-positive-and-negative-effects-of-the-industrial-revolution-essay 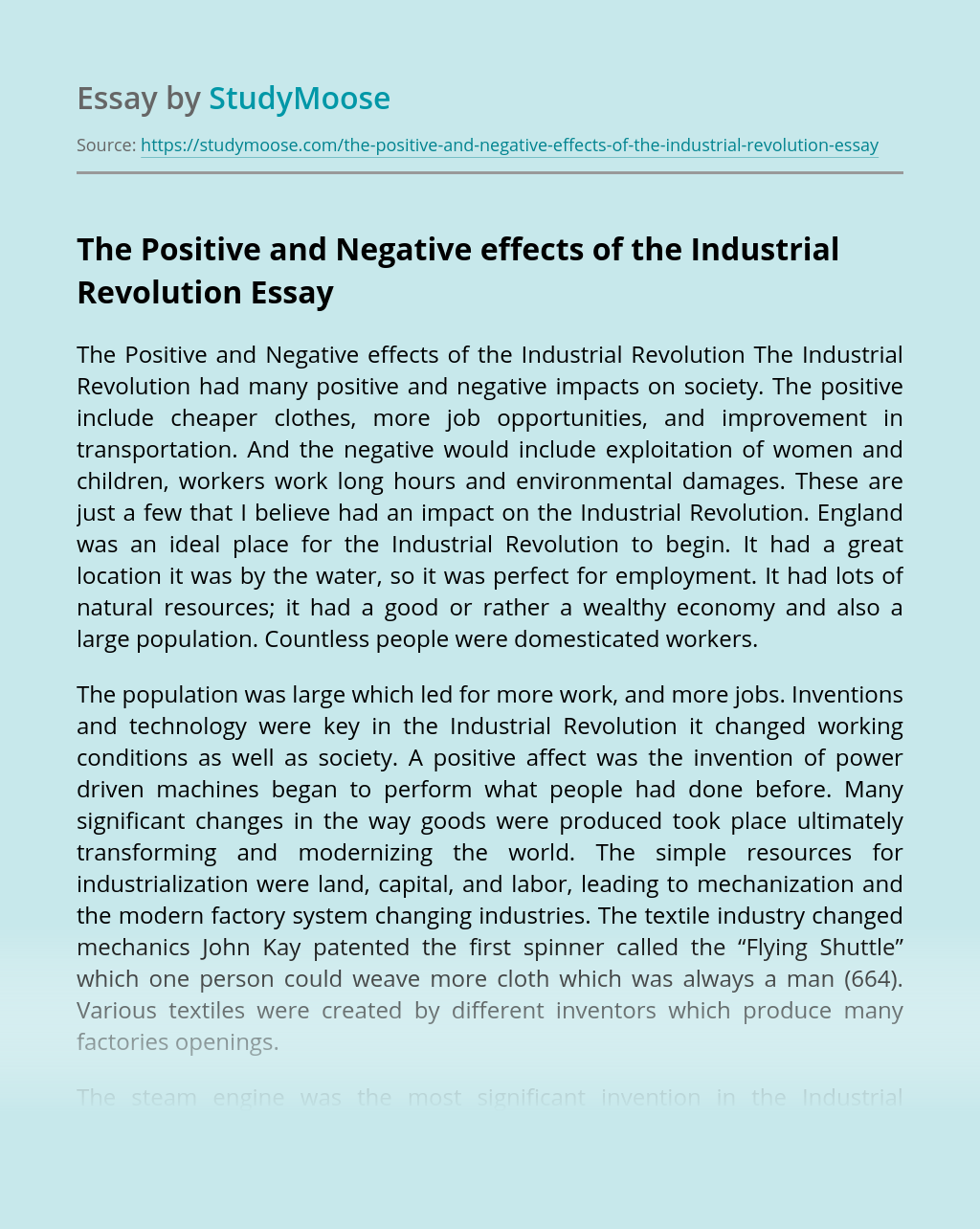