"The Outsiders" by S. E. Hinton

In the novel, The Outsiders by S. E. Hinton, Dallas Winston is a complex persona that wishes to protect the other greasers from experiencing prejudice and adversity. (T)Dallas Winston is known as one of the most dangerous and spiteful greasers out there, he will not hesitate to go to jail for the sake of fellow gang members. Greasers are rebellious youths in the 1960s who style their hair with profuse amounts of hair grease. Compared to socs, greasers are often in tightly knit-gangs.

Don't use plagiarized sources. Get your custom essay on
“ “The Outsiders” by S. E. Hinton ”
Get custom paper
NEW! smart matching with writer

Though greasers are selfless and benevolent, the media and authorities state otherwise. Socs, also known as the west-side rich kids, are commended for their “contributions to society.” Socs are seen as heroes while greasers are condemned and seen as disgraces among society. This a prime example of prejudice created by those who are seen as “socially acceptable.” Dallas or Dally is a victim of this and knows well the tragic reality of it all. Due to Dally’s experiences at a young age, he wishes for the other greasers to lead a different path.

Therefore, Dally takes responsibility for crimes his friends committed because he is fearful of the effects jail might cause to their personalities. (E)Hinton writes, ‘ “Johnny. Johnny, I ain’t mad at you. I just don’t want you to get hurt. You don’t know what a few months in jail can do to you. Oh, blast it, Johnny, you get hardened in jail. I don’t want that to happen to you.

Like it happened to me¦” (90) (X)This quote is significant because Dally, a person depicted as self-centered is openly saying that he cares for someone other than himself. Pony and Johnny are the youngest and most innocent among the gang. These two are seen as individuals Dally must protect, especially Johnny. During an encounter with Socs, Ponyboy is assaulted and beaten to the point Johnny had to intervene with force. In the process of saving Ponyboy, Johnny kills a Soc named Bob. Bob is a big-name within the community and his murder would make many headlines. Knowing this, Dally helps them by providing them with basic necessities and a place to stay. He even vouched to the police that the two were headed for Texas. (E)When Dally visits the two he states, “Shoot, kid, the boys at the station know me by now. I get hauled in for everything that happens in our turf. While I was there I kinda let it slip that y’all were headin’ for Texas. So that’s where they’re lookin'” (Hinton 82).

Lying could get Dally into trouble by being an accessory. Furthermore, this quote shows how even though Dally is at risk of being accountable for the assistance of someone who committed a felony, he is willing to accept the punishments. Dally’s record is already tarnished with crimes such as assault and robbery. His record prevents him from pursuing possible dreams and living a fulfilling life. In reality, he has nothing to lose or gain, except the satisfaction of knowing he is helping out someone he cherishes. (Y)In other words, he would prefer to sacrifice his own wellbeing in order to give his friends opportunities he was not able to have. This sacrifice is one of his many acts of heroism throughout the novel. (T)Moreover, Dally’s emotional traumas have caused him to become distant and cold.

As seen throughout the novel, Dally has gained a reputation as a liar, drunkard, cheater, and thief. His malicious attitude and tough exterior have made him into a less than an ideal person. He is the embodiment of a stereotypical criminal, a lawbreaker. The police view him as a danger to society and constantly keep tabs on him. But underneath it all, he wishes for someone to give him a reason to continue living. Johnny gave him a reason to live even if he disliked everyone else. In fact, he doesn’t advise helping others because it won’t alter the public’s perspective on greasers. In spite of this fact, Dally aids Ponyboy and Johnny in saving the children in the burning church. He wouldn’t have acted this way if it weren’t for Johnny. Dally viewed Johnny as a little brother. His instinct was to save the boys from their own demise. In the end, each of them was left injured for the sake of those children.

This displays incredible altruism. In return, the boys were left with severe burns, broken bones and heroic titles. (E)After learning about Johnny’s condition he says to Ponyboy, ‘That’s what you get for helpin’ people. Editorials in the paper and a lot of trouble. . . . You’d better wise up, Pony . . . you get tough like me and you don’t get hurt. You look out for yourself and nothin’ can touch you’ (Hinton 147). As seen by this quote, Dally’s world hating attitude is actually a defense mechanism to protect his frail heart and tolerate his difficult life. (X)He became hardened to the point that he was indifferent to his circumstances.

In other words, Dally’s intent is to harden Ponyboy before he falls into a state of despair. Ponyboy is still a virgin to the feeling of utter loss and hopelessness. In comparison, Dally is no stranger to this feeling therefore he urges Pony to protect himself before he gets hurt. The haunting anticipation of loss causes Dally to act this way. (Y)Though Ponyboy is not aware of this, Dally’s words will bring about an epiphany that proves anyone can be a hero. The greasers will rise above adversity and financial status, proving that despite how they lead their life previously, everyone can become a hero. 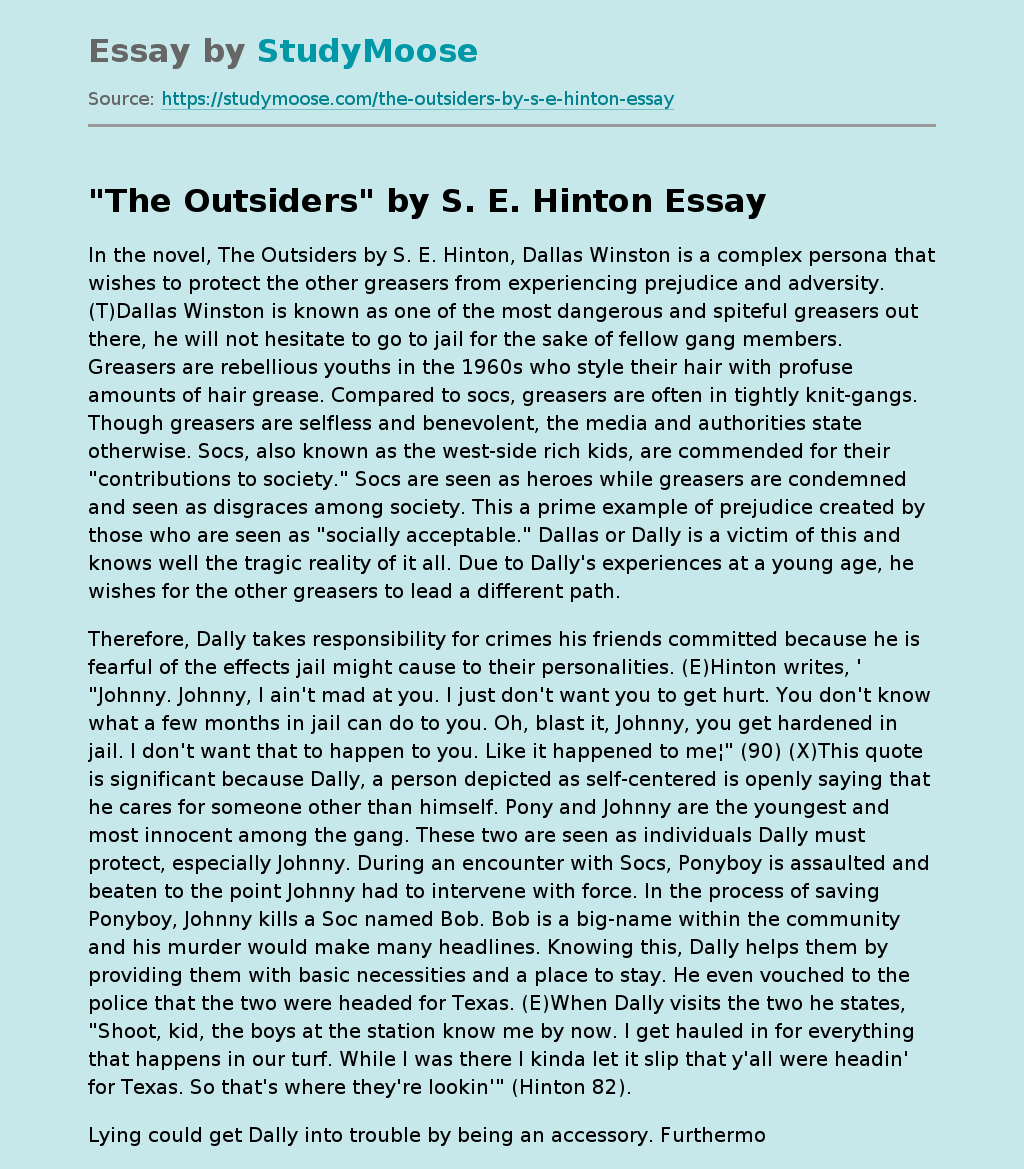