Sensitivity of Ponyboy from The Outsiders

Have you ever felt different from the people you hang out with? The Outsiders by S.E Hinton is about a “gang” that has some rough people in it that are alway getting blamed for what the rich boys do. One character that stands out in the story to me is Ponyboy Curtis, because he is different from all the other greasers. Through Ponyboy’s sensitivity, loyalty, and friendliness he learns that it’s ok to be different. Ponyboy can be described as sensitive for many reasons.

Don't use plagiarized sources. Get your custom essay on
“ Sensitivity of Ponyboy from The Outsiders ”
Get custom paper
NEW! smart matching with writer

One example shows Ponyboys sensitivity is when Darry slapped him he cried. On page 51, it says “I finally just sat down on the curb and cried, burying my face in my arms.” This shows that when Darry hit Pony, Pony let it get to him easy.

Another example of Ponyboy’s sensitivity is when Pony and Cherry were talking about sunsets. According to the novel on page 129/130, it says “can you see the sunset real good on the west side? You can see it on the east side too.

” Therefore Pony cares more about people and things than just fighting. From these examples, it is clear that Pony has a more caring and sensitive side to him than other greasers. Not only does Ponyboy display sensitivity , he also proves to be loyal. This is apparent when he leaves town with Johnny. On page 57, it says “we gotta get out of here, run away, the police will be here soon.” This shows that Ponyboy is loyal because even after Johnny killed Bob he still ran away with him.

Another example when Ponyboy stayed with Johnny when he was in the hospital. On page 146, it says “ I leaned against the cold glass window and tried to look sick.” This means that Ponyboy would do anything to go see Johnny as quick as he can.

Readers can see Ponyboys loyalty by the way he backs up his best friend Johnny. The final and most important description of Ponyboy is friendly. In one instance while Ponyboy was at the movies helped out Cherry and Marcia from Dallys tricks. On page 22, it says “Are you going to start in on us? No.”In just a few words, Ponyboy respects people to be friends with them. In another event Ponyboy talked about his brother SodaPop being his best friend. On page 18, it says “Soda’s enough, and I’d have him until I got out of school.” Therefore, Ponyboy cares a lot about his brother, just like he would a friend. S.E Hinton leaves readers with the definite impression that Pony is friendly and gets along with everyone.

In the novel The Outsiders, Ponyboy can be described as being sensitive, loyal, and friendly. One example of Pony’s sensitivity is that he is not as tough and rough as the other greasers. Ponyboy can also be described as being loyal when he always stayed by his family and friends sides. Finally, Ponyboy can also be considered friendly when he saw people’s situations and still was nice to them. In the end, it doesn’t matter who you are, and what you like to do, family and friends stay until the end.

Sensitivity of Ponyboy from The Outsiders. (2021, Dec 02). Retrieved from http://studymoose.com/sensitivity-of-ponyboy-from-the-outsiders-essay 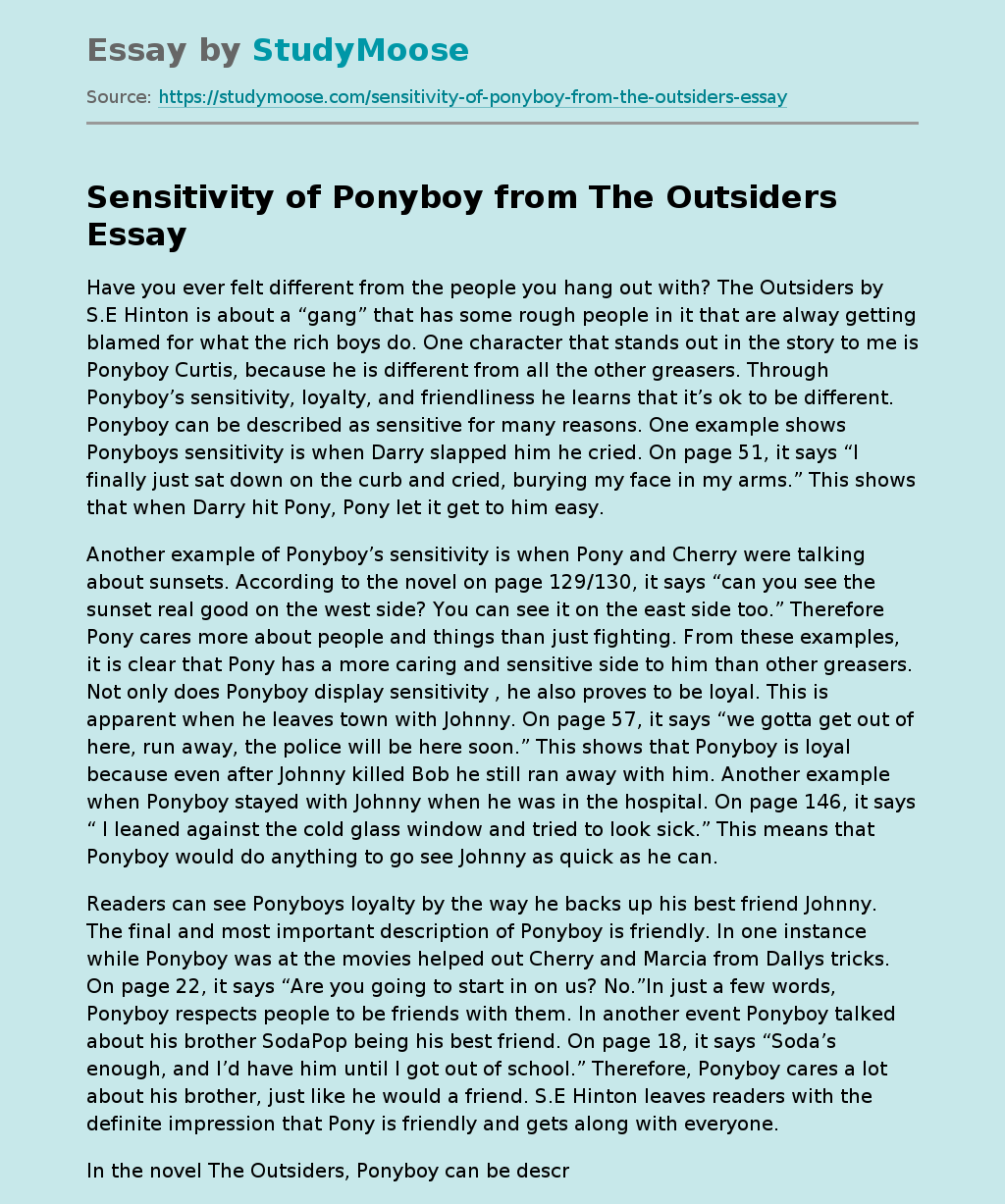