The Outsiders: Ponyboy Compared to Dally

If you take look a look at people around the world you can see there are many difference between;Eyes, ears, nose, the color of your skin along with ethnicity are some of the many ways people use to easily identify other people. When you try to see the aspects in people you need to look for whats on the inside,not just the outside. Many people just look at the outside of a person and never really try to see whats on the inside.

Don't use plagiarized sources. Get your custom essay on
“ The Outsiders: Ponyboy Compared to Dally ”
Get custom paper
NEW! smart matching with writer

The Greasers get into many rumbles with the Soc’s. As members of the gang the Greasers are very close to one another,especially to Johnny. Another thing makes Ponyboy and Dally the same is the fact that they both care deeply about Johnny. Ponyboy cared about johnny’s welfare like the others but ever since he’s experience with Johnny at the church Ponyboy`s relationship with Johnny grew strong because Pony really got to understand Johnny better by talking about life and literature.

Dally cared about hardly anything in the world. ut Johnny ,so he robbed a store to get gun down by the police because he thought hes life wasn’t over. The fact that Ponyboy and Dally booth do drugs is another way both of theses characters are. Dally like the other members of the gangs drinks to help his problems.

Ponyboy drinks just like the rest of the gang but he is very addicted to cigarettes. Even with this in comm Ponyboy and Dally are still two very different people. Ponyboy, for one has a loving family of his brothers Sodapop and Darry, even though their parents died.

Dally on the other hand had very little mentioned about his parents, but from what the book said Dally had been in jail several times. The novel mentions very little about his parents, so it seem like his parents did not care about him. What Dally cared a lot about was Johnny’s death. When the character, Johnny, died, Dally and Pony reacted very differently to it. Dally, after seeing Johnny die thought he’s life was very bleak so he decided to rob a store to get gunned down by the police because he though he life was not worth living.

All he truly cared about life was Johnny so when johnny died Dally was very ornery in his thinking. Ponyboy, on the other hand after being delirious from his trip at the hospital, coped with it in his mind by the fact he keep continually repeating to himself that Johnny wasn’t dead. It is obvious that Pony and Johnny have many differences. The characters Pony and Dally have many differences that separate the two of them from each other but at the same time they have many similarities too.

The fact there both in a gang called the Greasers, care deeply about Johnny and they both have taken drugs regularly are some of the ways they are similar. The way each of their family life and the way they both reacted to Johnny’s death and how they view life make these two character from The Outsiders vastly different. Like Pony and Dally people come in many different sizes skin colors and ethnic backgrounds but inspite of all this differences people around the world like the characters Ponyboy and Dally are very similar if you look on the inside of person and not just the outside.

The Outsiders: Ponyboy Compared to Dally. (2021, Mar 29). Retrieved from https://studymoose.com/re-the-outsiders-ponyboy-compared-to-dally-essay 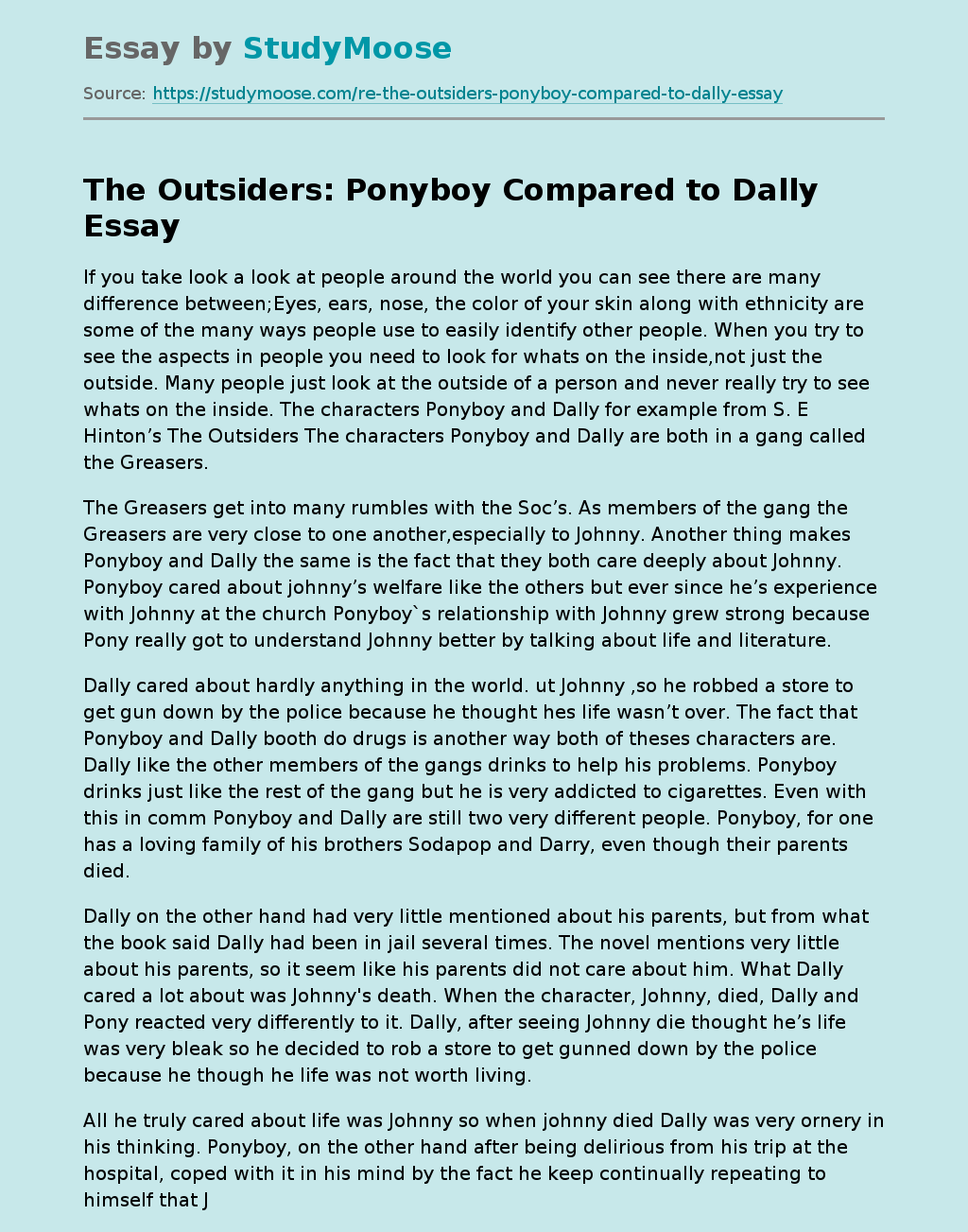