A Lesson Learned- An Outsiders Essay

A Lesson Learned
The Outsiders Essay

Imagine living on the streets, a brother for a parent and being torn between two deadly rival gangs. In the novel The Outsiders by S. E. Hinton, three teenage boys wander around their hometown, unaware of the dangers that lurk behind each alley. Due to their chaotic experiences in the city, Ponyboy, Johnny, and Randy were able to learn important life lessons. Ponyboy learned that even though the city was separated into Greasers and Socials; they were all similar people.

Don't use plagiarized sources. Get your custom essay on
“ A Lesson Learned- An Outsiders Essay ”
Get custom paper
NEW! smart matching with writer

Johnny realized that life was too short and did not have enough “good” in it. Lastly, Randy learned that precious time was being wasted for fighting. Overall, living on the streets can teach teens many valuable lessons.

Ponyboy Curtis was one of the first characters to learn from his past. First, he learned that they were all similar people, no matter what gang they were in. At the beginning of the story, Ponyboy assumed the Socs were rich socialites that owned expensive cars and jumped Greasers, because being part of the Greasers gang taught him that.

He later on realized that the Socs were actually similar to the Greasers; their social statuses were just separating them. Ponyboy narrates, “Maybe the two different worlds we lived in weren’t so different.

We saw the same sunset” (Hinton 41). He said this in realization that the two gangs were truly alike. Ponyboy also gained knowledge that the Socs often had similar problems as the Greasers. For example, some Socs are tired of fighting and wonder whether the rivalry was worth it; Ponyboy and Johnny share the same feelings.

Ponyboy furthermore recognized that the Socs encounter feelings of pain, fear, and sorrow through past experiences, just as the Greasers do. In conclusion, Ponyboy realized that despite one gang was richer; the Socs were just as equal as the Greasers.

In addition to Ponyboy, Johnny also learned a multitude of lessons throughout his sixteen years of life. Firstly, Johnny learned that life is too short to be full of regrets. Prior to his journey to Windrixville, he remained as the frightened pet of the Greasers due to several beatings from his abusive parents and a group of Socs. As he lay in the hospital bed after rescuing kids from a burning building, Johnny told Ponyboy that before he had been considering committing suicide. After looking back at his life, Johnny finally realized that he was too young to die;

he had not lived his life the way he wanted to. Afterwards, Johnny discovered that staying good and innocent is the best way to live your life. Before he died, he said to Ponyboy, “Stay gold, Ponyboy. Stay gold…” (Hinton 148). Johnny wanted Ponyboy to stay innocent, or stay gold, by not turning tough and into a convict like the rest of the members in the gang. In the end, Ponyboy read a letter written from Johnny, saying he was glad he rescued the kids because they had more to live for than he did. On the whole, Johnny learned that you could live a longer life by remaining gold.

Lastly, Randy Anderson was one of the only Socs that learned a life lesson. After the death of his best friend, Bob Sheldon, Randy’s whole personality changed. Before Bob died, Randy was happily drunk from everything he got, since he was a Soc. Like Bob, he searched for a fight whenever and wherever he could. When problems went from bad to worse, Randy finally realized that fighting was not the answer. The rivalry between Socs and Greasers was not going to cause anything but hate. He says to Ponyboy, “So it doesn’t do any good, the fighting and killing. It doesn’t prove anything” (Hinton 117). Randy was tired of all the fighting because there was no point.

He realized that even if the Greasers beat the Socs in the rumble, it would not do anything. Greasers would still be where the city placed them, at the bottom, and the Socs would still be at top. Later on, Randy decides to not take part in the rumble and just flee the city. However, he gained respect from a Greaser, Ponyboy, from doing so. As a result, Randy ran away, knowing that fighting would not solve anything.

In the end, the three boys learned necessary lessons that will help them make better choices in the coming future. Ponyboy learned that a separation of groups does not change the fact that everyone is human and have their own flaws. Thanks to his friends, Johnny was able to make the last year of his life worth it and full of “gold”. Finally, Randy became the first Soc to realize that fighting each other would not solve any problems; it would only make the situations worse. To conclude, people can learn much from living in the streets, but how they choose to use that information is their choice.

A Lesson Learned- An Outsiders Essay. (2016, Apr 27). Retrieved from https://studymoose.com/a-lesson-learned-an-outsiders-essay 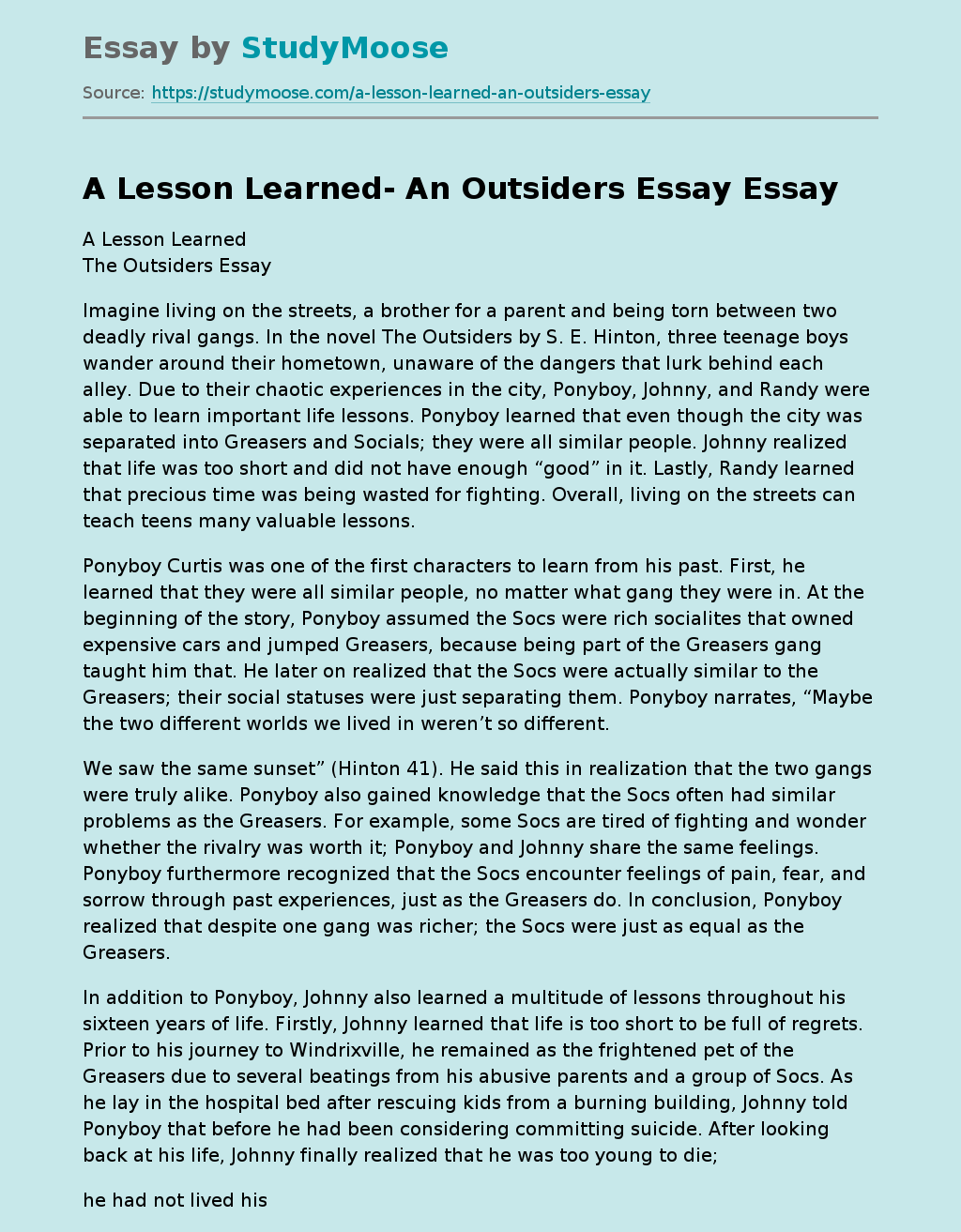