The Open Window vs. The Interlopers Short Stories Comparison

Although, stories have different topics, they do have similarities and differences, like these two stories.

Don't use plagiarized sources. Get your custom essay on
“ The Open Window vs. The Interlopers Short Stories Comparison ”
Get custom paper
NEW! smart matching with writer

Irony is always found in Saki’s stories. Irony is the opposite of what the reader predicts will happen. In these two stories, Saki ends with a surprise twist in the last sentence. The irony from “The Open Window,” is that the girl uses her imagination to drive away a man. Framton Nuttel comes to see a woman (Mrs. Sappleton) to cure his nerves. However, as soon as Nuttel arrives he meets Mrs.

Sappleton’s niece, who tells him an imaginary story about how Mrs. Sappleton’s husband and two younger brothers disappear. She tells him how her aunt leaves the window open for her husband and brothers. When Nuttel first sees three figures walking across the lawn towards the window, he quickly retreats. When everyone asks the girl why Nuttel runs away she simply says that he had a phobia of dogs.

In the same way, the irony in “The Interlopers,” is that the two men get killed after solving a dispute that has been going on for years.

In this story two men, Ulrich von Gradwitz and Georg Znaeym fight over a “narrow strip of precipitous land” that is not even populated much. When the two men meet each other, they only have hate and murder in their minds when suddenly a tree pins them down to the floor. Even though they are rivals, they share wine and become friends. However, when they start screaming for help, wolves come. This is the surprise twist that Saki gives in his stories.

An additional similarity is the type of conflict in both stories. Both stories have a conflict between two characters. In “The Interlopers,” Ulrich von Gradwitz and Georg Znaeym fight over the border between their lands that has been burning between them for three generations. This reminds of the conflict of India and Pakistan and how they have been fighting for Kashmir. This conflict of character verses character shows that Ulrich von Gradwitz and Georg Znaeym have so much hatred against each other that they will kill each other or even keep each other as captives. In “The Open Window,” Vera (Mrs. Sappleton’s niece) tells Framton Nuttle an imaginary story that drives him away from a place that he wanted peace and serenity from. If Vera never told Framton a lie, then he would not have run away. In both stories similarities presents itself more than differences.

On the contrary, the two stories written by Saki have a few differences, too. “The Interlopers” has more nature involvement than the “Open Window.” In “The Interlopers,” the whole setting occurs in the Carpathian Mountains. Also in this story the two main characters are influenced by nature because both characters are pinned down by a tree that was hit by lightning. Nature wins in the end when one of the characters sees wolves in the distance coming towards them. In “The Open Window,” there is little involvement of nature. The only time the character discusses nature is when Vera is describing how her aunt’s husband and two younger brothers go missing when they go for their day’s shooting. She describes how they get stuck in the marshes and their bodies were never recovered. This is a big difference in both stories.

Another difference between these stories is the themes. The theme is an idea that is carried throughout the whole story. In “The Interlopers,” the theme is that if you hold a grudge for too long you will have dire consequences. Georg and Ulrich have had a family feud for three generations. They have been fighting for a piece of land when they finally realize how foolish this lifelong quarrel is and decide to put it behind them and become friends. Although they become friends an unsuspected twist comes and they meet their fate with wolves. If Georg and Ulrich solved their dispute a long time ago, maybe they would have never met their ill fate with the wolves.

In “The Open Window,” the theme is not to be so gullible and believe what everybody says. Framton Nuttel is so gullible that he believes Vera’s story of how her aunt’s husband and brothers disappear and were never found and that is why her aunt leaves the French window open. Yet, when the men do come back Framton thinks he sees a ghost and quickly races out of the house. If Framton did not believe Vera’s story he would have been able to get the complete rest that he needed. Even though both stories have differences, you can clearly see how the similarities are more numerous.

To conclude, I very much enjoyed both stories by Saki. His short stories have many similarities embedded in them and a few differences. The two major similarities in “The Open Window” and “The Interlopers” are the irony and type of conflicts in the two short stories. I would recommend these two stories to anyone who likes to have a surprise twist in the last sentence of the story. I would like to end with a quote from Saki, “A little inaccuracy sometimes saves tons of explanation.”

The Open Window vs. The Interlopers Short Stories Comparison. (2016, Jul 31). Retrieved from http://studymoose.com/the-open-window-vs-the-interlopers-short-stories-comparison-essay 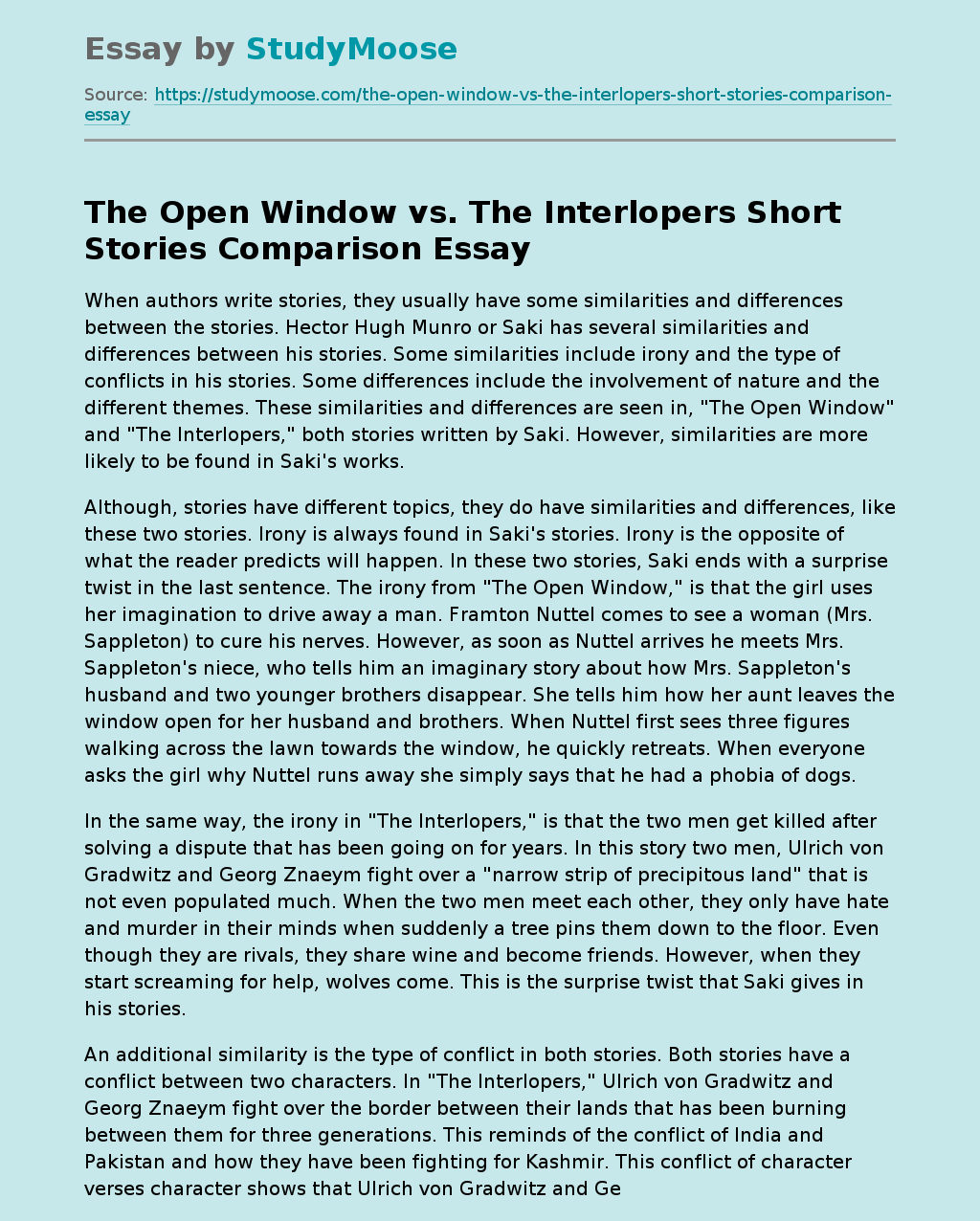