"The Interlopers" by Saki

Plot – tell where each of the following occurs in “The Interlopers” antecedent action .

The von Gradwitz and Znaeym families had been feuding over a narrow strip of woodland for three generations. initial incident –
While patrolling this strip of woodland one dark and stormy night, Ulrich von Gradwitz and Georg Znaeym found themselves face to face, only to have a heavy beech tree fall on them, trapping them both, leaving no limbs free to fire a gun for help or to dispatch the other, permanently.

Don't use plagiarized sources. Get your custom essay on
“ “The Interlopers” by Saki ”
Get custom paper
NEW! smart matching with writer

The men continue to quarrel, while trapped, suggesting that whoever is rescued first will see that his men “accidentally” roll the fallen beech tree on top of the other, killing him. climax –  von Gradwitz makes the overture to end the feud, followed by Znaeym agreeing. After three decades, the von Gradwitzes and Znaeyms will be able to live in peace and harmony. falling action –
The men begin yelling for their men to come. Wolves, instead, are summoned by their hunting call.

resolution –
The end of the feud is not to be. With the burial of Ulrich von Gradwitz and Georg Znaeym will likely come continued fighting between the two warring families, unless they decide that the death of the heads of the two families is enough. However, after generations of feuding, this is not likely.

Conflict – explain the main conflict in “The Interlopers” Man vs.

man – The von Gradwitz and Znaeym families had been feuding over a narrow strip of woodland for three generations. Man vs. nature – This conflict also figures in the story as it is the storm and a beech tree that are responsible for trapping the two men, and wolves who are responsible for finishing them off.

– major or minor? Explain  von Gradwitz is a major character. The story and the conflict would not be possible without him. – round or flat? Explain
von Gradwitz is a round character. He is initially seen full of fury for his enemy and would have killed Georg had the tree not fallen on them both. Even in pain, and under threat of death from Znaeym’s men, von Gradwitz has compassion for his fellow “trapee”, and offers him his wineflask.

Von Gradwitz also shows himself to be a man who wishes for peace and compromise by settling the long-standing feud with Znaeym. – static or dynamic? Explain von Gradwitz is a dynamic character. The events of the story change him. He goes from being consumed with fury and murderous hatred for his enemy, to a man who desires an end to the feud and looking forward to living in peace with his new friend. – antagonist or protagonist? Explain von Gradwitz is the protagonist in that he is trying to “win” the conflict over Znaeym, and then the tree, and, of course, the wolves. He is able to settle the long-running feud which has the potential to bring a lasting peace to the forest.

The setting creates an eerie, sinister mood. The two men are separated from their bands of hunters by the dark and the storm. Lightning is flashing, thunder is crashing and it is cold. How does the setting affect the plot, conflict, and characters? The fact that the story takes place in a forest during a storm provides the element needed to trap the two men – the falling beech tree. Since it was night and storming, the accident was not seen and heard. Had the tree not fallen, one of the men would have shot the other, totally changing the final conflict, the ending of the story and the character change that each man made.

Point of View – explain the point of view from which “The Interlopers” is told. The story is told in the limited-omniscient point of view. Saki tells the story in third person, but from the viewpoint of von Gradwitz, looking at events through his eyes. We know everything that goes on in the mind of von Gradwitz, but nothing about what Znaeym is feeling or thinking – unless, of course, he expresses his feelings in some way. While we can observe the external actions of both characters, we see into von Gradwitz’s mind. Our consciousness is limited to von Gradwitz, as we see events from his viewpoint only.

Irony – With what kind of irony does “The Interlopers” end? Explain. Situational irony is a discrepancy between what is expected, and what actually happens. Destiny appears to be controlling one’s fate, where one has little influence or significance. Although von Gradwitz and Znaeym have ended their feud, Fate sees things differently, and because of the interloping wolves putting an end to the lives of the two men, their feud will likely continue. Peace will die with them.

Theme – what is the theme of “The Interlopers”?

The theme of “The Interlopers” is THAT one wastes a great deal of time and energy when involved in a feud and should take every action to end such a feud before it is too late. In the case of von Gradwitz and Znaeym, they waited too late to settle matters between their two families. Although they made the effort to end the long-standing disagreement, their peacemaking efforts were in vain, as both men were killed before they were able to make their reconciliation known.

"The Interlopers" by Saki. (2016, May 11). Retrieved from https://studymoose.com/the-interlopers-by-saki-essay 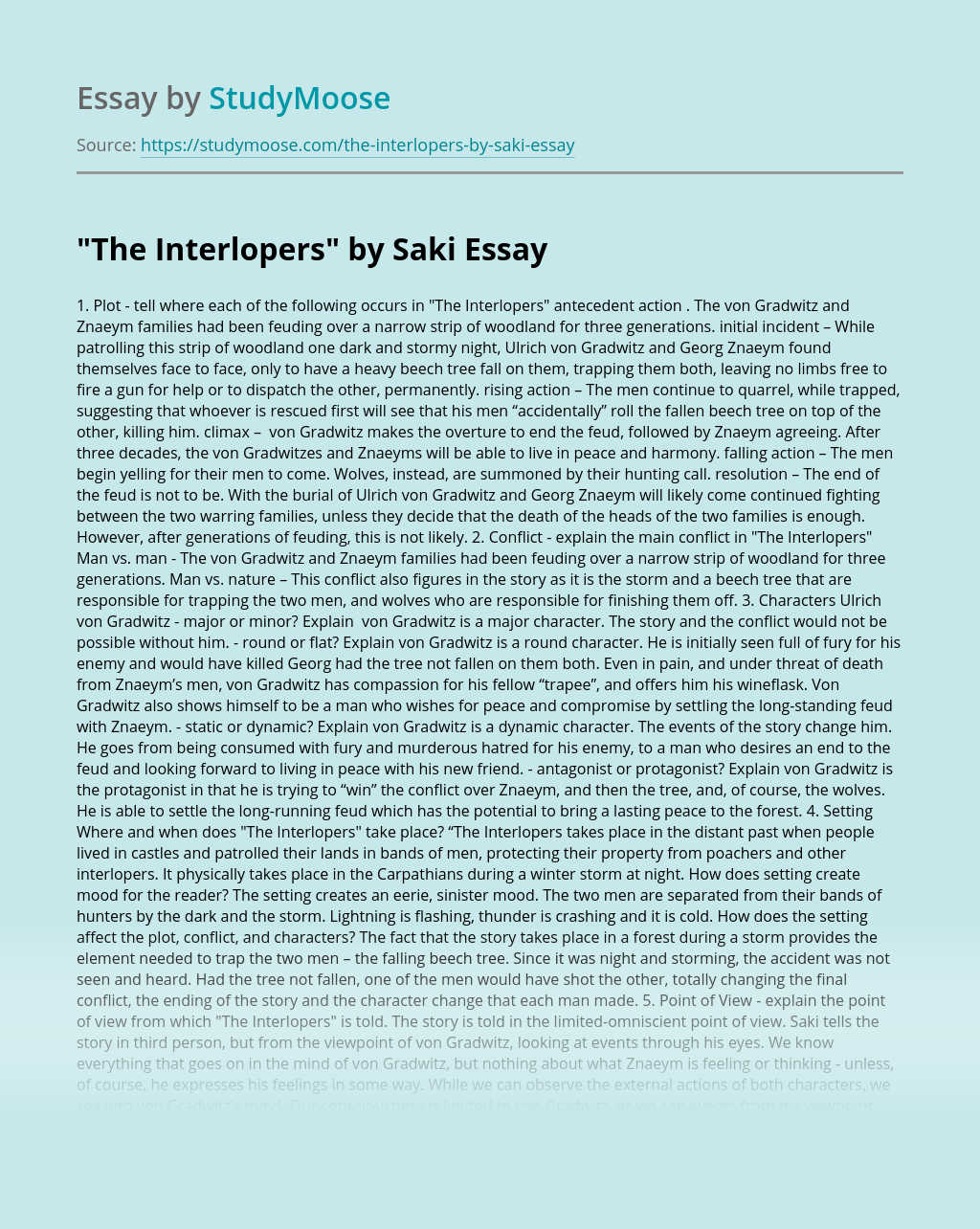