Overview of The Interlopers

The Interlopers is a short story filled with suspense written by Saki. The Interlopers has a lot of mood changes through out the story. It has a lot of suspense and tragedy. The mood is how the characters react or the personality of a story. The mood is essential to a story because it can make you think or wonder what’s going to happen next. Without a mood a story, book, or movie would be boring and make no sense.

Don't use plagiarized sources. Get your custom essay on
“ Overview of The Interlopers ”
Get custom paper
NEW! smart matching with writer

The story takes place in the eastern spurs of the Karpathians where a man named Ulrich is waiting for a beast from the forest to come into his sight.

Ulrich is angry that his enemy which is his neighbor named Georg is hunting on his land and wants to settle things once and for all. This clears things up and the suspense gets more intense.

Suddenly, the animals in the forest are acting weird and Ulrich is getting closer to meeting his enemy. The suspense increases and lets you know that they are about to face each other. Then Ulrich meets Georg face to face, both have a gun In their hands and are ready to fire.

The mood changes from suspense to intense and you believe that someone will get shoot and die. Then when you think that Georg will get killed the suspense lowers because Ulrich wont will Georg without talking with him first. Then all of a sudden Ulrich is ready to kill Georg but a tree falls on both men.

The mood changes from suspense to tragedy because Ulrich had his chance to kill Georg and a tree ruins his plan. Then they start arguing and cursing between them selves. The mood is now angry and there is a lot of hate between them. They say that which ever gets rescued first will survive the other will die under the tree. The suspense comes back when it’s a matter of luck of who will get rescued first. When least expected Ulrich offers Georg some wine. Then Ulrich asks Georg to be his friend and Georg accepts Ulrich request.

The mood changes from angry to friendly and happy. They both suggest that they call their men so they can rescue them both. They both hear foot steps just that they are not their men but a pack of wolves. At the end the mood is a tragedy because just when Ulrich and Georg become friends they both end up dying. This essay was about the mood of the short story The Interlopers. How the mood changes through out the story and the different personalities of the characters. The places were the mood changes through out the story and how it changed the story.

Overview of The Interlopers. (2017, Feb 08). Retrieved from http://studymoose.com/overview-of-the-interlopers-essay 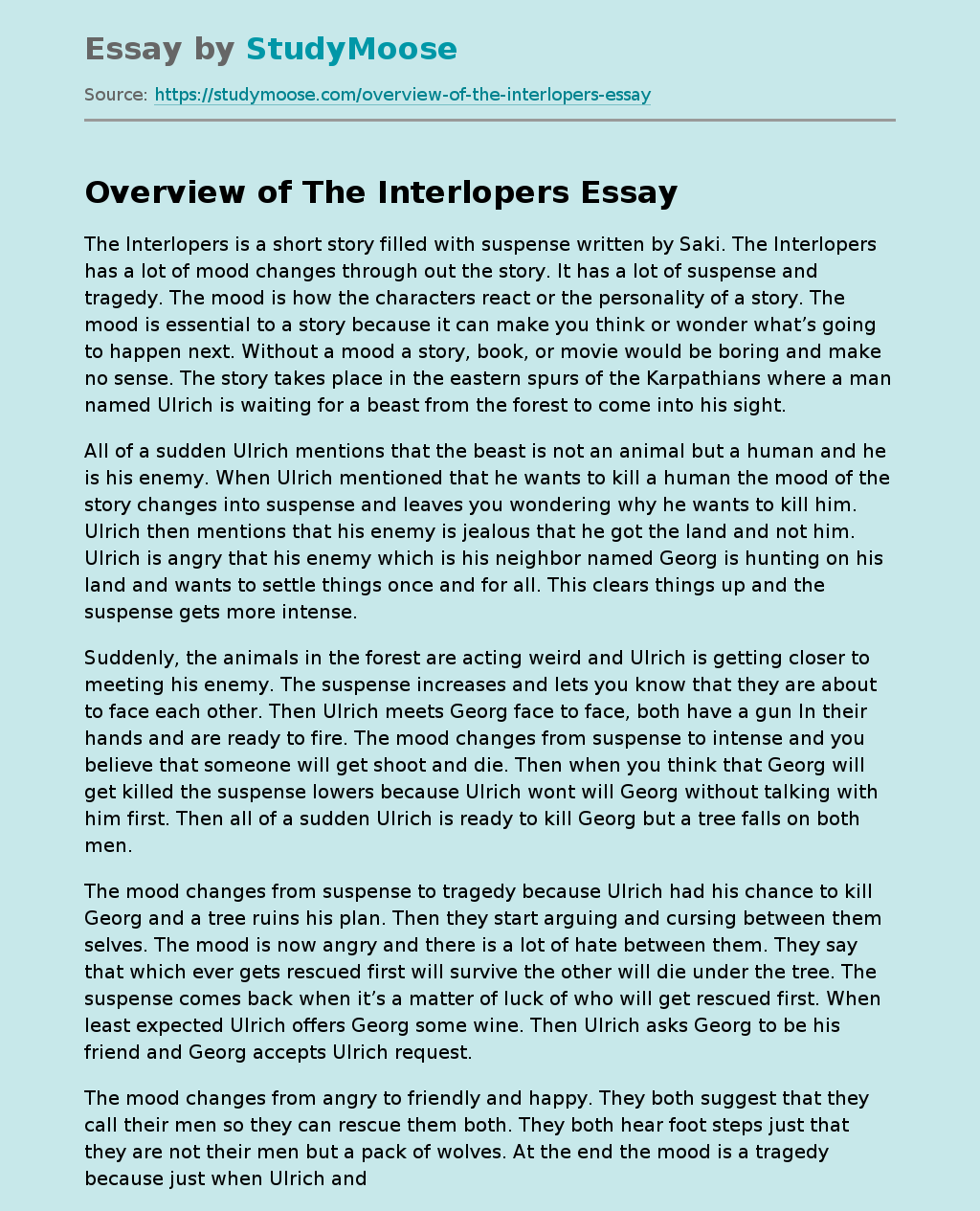