Analysis of The Shifting Heart, by Richard Beynon

Thesis: In The Shifting Heart, the playwright Richard Beynon conveys ideas and representations of Australian identity through the use of narrative techniques, especially dialogue and characterisation. Each character represents an aspect of Australian society in the 1950’s that Beynon perceives to be true. 1st published in 1960. Set in 1956. NUTSHELL-

1. Not accepting of other cultures; Abuse against Gino and failed assimilation halfway between identities. Cultural heritage is important in establishing identity -Through the characterisation of Gino, Beynon shows the rejection of Australians towards immigrants and other cultures.

Turn in your highest-quality paper
Get a qualified writer to help you with
“ Analysis of The Shifting Heart, by Richard Beynon ”
Get high-quality paper
NEW! AI matching with writers

-Page 95 Australian citizenship Certificate shows the belief Gino had that he had been accepted into Australian society. Momma “This we gotta put in a frame, he says.” It means something to him. Constant beatings he receives at the dance hall show that he is not accepted, as well as Barry shoving in the way in line “He tries to put his load straight on the scales- before us, so I told him…” Clarry: “You shouldn’ta told him (page 27).

Eventual death of Gino via the beatings shows the extreme racism and prejudice in Australia during the time of production. -Assimilation is encouraged to fit in

-He tried to assimilate into Australian society, Pg 34 “Clarry. If he’s Australian, or…” and then continues on page 35 “Maria. Italian? (Pressing hard) What if he’s… between the two?”

2. The play explores the systemic racism that exists within Australian society and portrays the justice system as corrupt and discriminatory -Throughout the play it is evident that racism is widespread and commonly used, with the people supporting immigrants being the minority.

-After the death of Gino, it is evident that the law system is corrupt and that racism is systemic. -Detective Lukie- Boss is looking to promote him if he successfully pins the fight on the dead Gino. Page 69 rank is Detective sergeant (high ranking). Corrupt- makes assumptions, takes one side of the story of the Australian, “All I know are the facts,” page 73.

Biased and racist Witness girl saw it all unfold page 96 the girl Gino was meeting on Italians side: Lukie “And we found a girl, too; arranged to meet him in the foyer. Saw most of it happen, she says…”- Police still confident Gino was to blame -Page 97 Clarry “Why the change of face, eh? After promotion?” Lukie: “I’m happy. (Pause.) But i got a boss with ambitions.” Clarry talking to Lukie about Momma going to inquest; “She remembers, she forgets; what the hell difference will it make?” Knows whatever happens Gino will be declared guilty of drunken violence

3. A societies attitudes towards a minority race can be changed when they gain a greater understanding of the people aligned with that race rather than basing their judgment on stereotypes – Reflects upon the belief that racism is taught rather than inherited or ‘natural’ – Clarry represents this thesis, connotations of the title refer to him -Represented as a typical Aussie bloke, ie “could obviously manage without help in a fight,” page 20. In reference to Barry, the scrap metal collector who pushes in line in front of Gino, Clarry reasons that “Because he’s an older man, that’s why. He was in this game before you were even in this country.” “Rugged man of 36,” page 20 – Start of the novel Clarry loves Maria but doesn’t want to be acknowledged as being related to Bianchi’s. Maria: ‘…when he’s introduced Gino to people, but never once did he call him his brother-in-law” page 77 He isn’t violent but he still has aspects of racism Refer to conversation with Lukie about Gino being guilty, he sticks up for them Challenges authority figures and calls their kid Gino

“But last night-it clicked for me. I dunno… I felt sort of… good…” stereotype emotion, shows side

4. Alcohol is needed to have a good time and celebrate (Clarry and Donny) and the violence etc from it (misusing alcohol) -Donny Pratt: Represents alcoholism in Australia. (Leila bursts from the house with a ottle of beer and glasses…) “Here: quick, to wet its head. “Clarry (And he wrenches the top from a bottle.) “Here, Pop, grab yourself a lifeboat and hop inta that,” page 48. Reference to getting drunk, part of Aussie lifestyle. He is working class. Expresses the overlooking of domestic violence at the time. “How can I a hit you if I don’t remember?” Page 88 – Naturalised violence.

Analysis of The Shifting Heart, by Richard Beynon. (2016, Apr 01). Retrieved from http://studymoose.com/analysis-of-the-shifting-heart-by-richard-beynon-essay 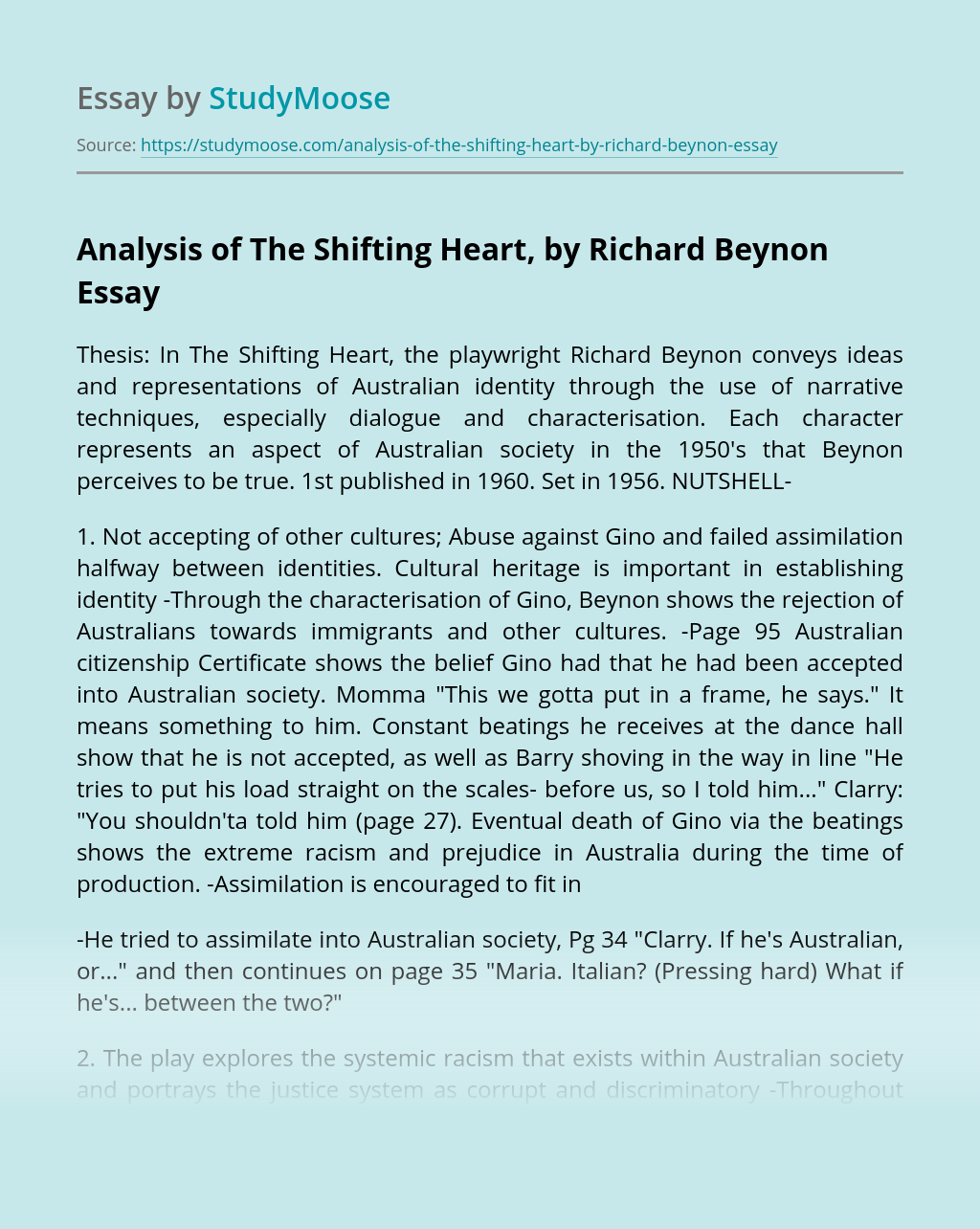 Turn in your highest-quality paper
Get a qualified writer to help you with
“ Analysis of The Shifting Heart, by Richard Beynon ”
Get high-quality paper
Helping students since 2015
Stay Safe, Stay Original