Elizabeth Bishop’s poem The Fish narrates the changing attitude of the speaker towards the fish. First, the fish is described as ancient and grizzled, showing signs of death and decay. However, upon closer inspection, the fish is made out to be a survivor of many battles. Through the use of figurative language, the poet shows the speaker’s shift from noting only the fish’s dejection to admiring him for his past glories.

Bishop begins with the personification of the fish into a figure of defeat and age.

Don't use plagiarized sources. Get your custom essay on
“ Elisabeth Bishop’s poem “The Fish” ”
Get custom paper
NEW! smart matching with writer

The speaker mentions that the fish had not fought at all, as though he had given up all hope. She compares the fish’s skin to old wallpaper which would not be securely attached to the wall as skin loses firmness with age. In addition, Bishop details the extent of the fish’s injuries, everything from lice and barnacles to the fresh blood of his wounds. Such imagery invokes feelings of decay and abandonment as parasites are allowed to slowly consume him.

The speaker also contemplates the fish’s innards, suggesting that his has become a mass of flesh and bone without spirit.

The speaker furthers the personification of the fish by looking into his eyes and remarking that he had not looked back fully. Instead, the fish had only shifted his stare a little towards the light, further suggesting lack of will while giving the fish a very human feeling of dejection. Not caring about the face of his conqueror, the fish only seeks to confront death, represented by the light that he turns towards.

The focus on the fish’s physical structure denotes the fish’s lack of spirit yet it is this very lifelessness that gives the fish the human emotions of apathy and hopelessness. Through the personification of the fish, the poet shows the speaker’s projection of lack of spirit and hope onto the fish.

In contrast, the speaker’s discovery of past hooks imbedded into the fish’s mouth gives him the persona of a fallen war hero who has survived many battles in the past. The speaker’s perception then changes from one of lifelessness to one of courage and animation, denoted by the admiration in the speaker’s tone. Upon seeing the frayed lines, she uses verbs of action and struggle as she imagines the fish fighting and breaking the line. Thus, the poet’s comparison of the lines to ribbons furthers the fish’s appearance as a hero retaining the medals of his victory. The further comparison of the thread to a beard of wisdom shows the speaker’s admiration of the fish’s accumulation of experience through time.

The author then explains that he boat become filled with victory in the appearance of a rainbow. A rainbow can be associated with triumph and survival, as the viewer can enjoy the calmness after a storm, often a scene of chaos and potential violence especially combined with the boat setting. Through viewing the remains of the past struggles that the fish has faced, the speaker’s perception of the fish changes him from a being in decline to the survival of past battles.

In The Fish, Bishop transforms an old fish the speaker caught into a glorious figure of reverence. Bishop uses personification and analogies to set up the fish as dejected and lacking in spirit. However, the speaker’s perception changes and tone is markedly more of admiration while symbolism is added as the remains of the fish’s struggle become the trophies of victory. By employing personification and symbolism, Bishop uses figurative language to denote the speaker’s changing understanding of the fish. 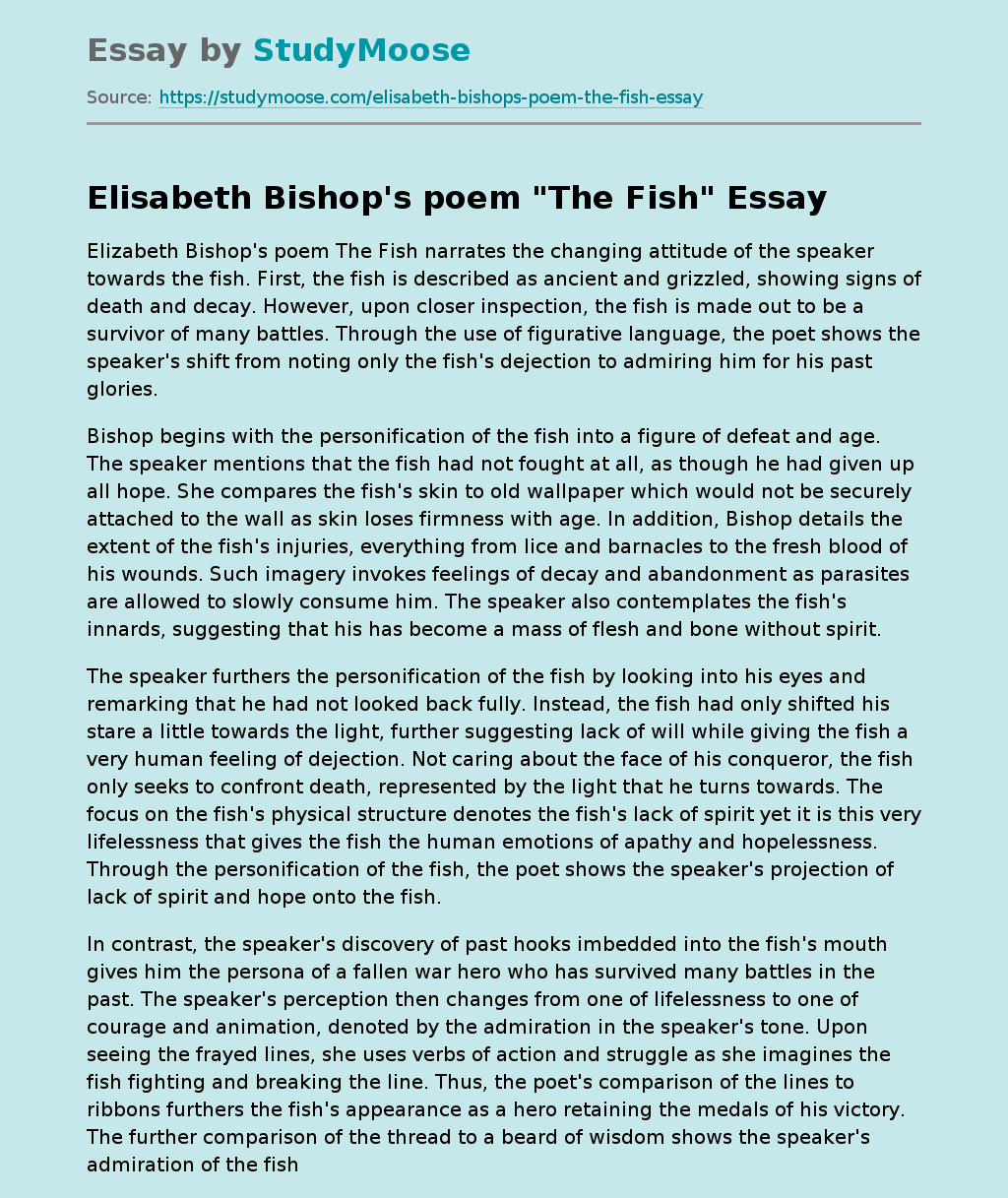