The Fish by Elizabeth Bishop

Elizabeth Bishop was born in Massachusetts in 1911 and had a harsh childhood. She lost her parents when she was very young and had to move from place to place to live with her grandparents. However, Bishop seldom includes explicit accounts of her personal life in her works. Instead, she focuses on her view to the physical world and vividly describes objects in her poems to give strong impression to readers. Bishop’s The Fish was written in 1946, in which she a fish caught by a fisherman, the speaker, is pictured.

Don't use plagiarized sources. Get your custom essay on
“ The Fish by Elizabeth Bishop ”
Get custom paper
NEW! smart matching with writer

Visual imagery plays an essential role in cultivating the atmosphere and emotion of the poem. In this essay I will analyze how visual imagery is effectively used to deliver messages and connect the flow of emotion of the whole poem. The Fish is a rather long poem which consists of 76 lines. Bishop stated that this was a memory poem, recording her catching and letting go a fish in 1938 in Key West.

Throughout the poem, the fish is portrayed with similes and detailed descriptions. Vivid images empower imagination for readers and enable readers to create a picture of the poem in their minds.

This works effectively to engage readers. The point of view of the speaker changes throughout the poem. At the beginning of the poem, the speaker is more like an outsider. Gradually, the focus has shifted to the appearance of the fish. At the end of the poem, after the epiphany of the speaker, he or she has, to some extent, become part of the marine.

He respected the fish and also the nature and finally decided to let the fish go. Many colors are included in the poem and the colors become more vibrant as the poem progresses. The first color appeared in the poem is ‘brown’ in line 10. Then ‘white’ color appears in line 19 and 27. Colors then become sharper: ‘reds and blacks’ (line 30), ‘pink’ (line 32), ‘yellowed’ (line 36), ‘green’ (line 56) and ‘orange’ (line 71). As the colors become more vibrant, the respect and admiration of the speaker to the fish increases. Finally, after building up the progression of colors and combining all the colors, the ‘rainbow’ is formed along with the epiphany of the speaker. The fish in the poem is quite ugly as described. Although Bishop called The Fish a memory poem, some do not believe that the fish is realistic.

The fish’s species cannot be accurately identified based on the description in the poem. Bishop admitted that she did made some minor alteration but she always tried to stick as much as possible to what really happened when she described something in a poem. According to the description in the poem, it is possible that the fish caught is a grouper or a black drum. (Frost, 2004) Some readers criticized that the description to the fish is not accurate enough. The metaphors which visualize the fish are unusual, yet conscious. Like other Bishop’s poem, descriptions and metaphors are carefully crafted. Indeed, Bishop always demonstrates her acute observational powers in her poems.(Frost, 2004) Thus, it can be true that in fact Bishop intentionally did not disclose the species of fish in the poem, evoking reader’s curiosity to figure out the real identity of the fish. By leaving some room for imaginations, an ambiguous image is also created by the fish: it is beautiful and ugly simultaneously. Bishop uses many similes in the poem to symbolize the appearance of the fish. It is interesting that objects used to describe the fish are flawed. Bishop thoughtfully made use of adjectives in the similes: stained wallpaper (line 13 – 15), tarnished tinfoil (line 38) and scratched isinglass (line 40). Imperfection is demonstrated by these objects.

By no means can one deny that nothing is actually perfect. Being imperfect, the fish symbolizes real life. Also, things which are stained, tarnished or scratched imply that they are worn out. This implies the fact that the fish is old and ‘experienced’. The writer also said the stained wallpaper has been lost through age and the lips of the fish showed signs of having been hooked before. The skin was compared to ‘ancient wall-paper’. Bishop also mention ‘a five-haired beard of wisdom’, in which beard often represents one having a considerable age and with age it comes experiences and wisdom. By these descriptions, the writer reveals the theme of ‘surviving’. The speaker respects the fish because of the struggle it has overcome before and ultimately released the fish. While using flawed and imperfect objects to describe the fish, Bishop compares the appearance of the fish to flowers from time to time. ‘Full blown roses’ (line 14) and ‘a big peony’ (line 33) is pictured. As mentioned, the writer is creating an ambiguous image for the fish. With this ambiguity, Bishops put the sense of beauty and death together. In the poem, the speaker had the power of life and death over the fish. At the beginning the fish was at the edge of being alive.

Then, as the speaker observed the fish, mixed feelings arouse. At last, the fish was given the chance to live longer. The initial image of the fish being hung beside the boat and at the end its release produced a huge contrast. Throughout the poem, readers realize the ironic beauty of the fish, which also implies the situation of lives of human-beings, which are full of imperfections and unavoidably diminish with time. Yet, experiences and wisdom grow as time goes by, and this is what makes a person respectable and ‘venerable’, as used in describing the fish in the poem. Elizabeth Bishop is renowned for her craftily descriptions and observations. In The Fish, Bishop helps reader realize beauty in unexpected places. In the last part of the poem, from line 65 to the end of the poem, Bishop looks at the beauty out of some usually considered ugly things. Oil spillage by boats is always considered as polluting and disgusting. However, the speaker saw rainbow on the oil spilled by the boat. Bishop invited readers to see beauty from some undiscovered things in everyday lives. Imagery acts as a cohesive device the poem. Bishop leads readers to follow the emotional flow of the speaker by using a lot of figurative language and sharp images.

As the speaker discovers the beauty of the fish and compares it to flowers, readers picture the beauty of the fish at the same time. The colors help develop the emotions and engage readers. Bishop also creates some doubts to evoke thoughts of readers. She mentioned that the fish did not fight at all when it was held beside the boat. This is a bit strange the fish was so tame and arouses questions and thinking. The hopeless image of the fish is so clear and sharp only in the first few lines of the poem. Besides writing in detail about the fish, there are also factual images on the boat: ‘rusted engine’ (line 70), ‘the sun-cracked thwarts’ (line 72) and ‘the oarlocks on their strings’ (line 73). This again justified that Bishop demonstrated her attentive eye to every detail of the described objects. Personification is used when the speaker described the fish as ‘venerable’, comparing it to a noble and holy person.

At the end of the poem, in line 66 – 67, ‘victory filled up/little rented boat’, where victory, an abstract noun, is portrayed as a concrete object which can fill up space. These descriptions are unusual and thought-provoking. All in all, the writer made use of very rich imagery to create the whole picture of the fishing experience in the poem and bring out messages about the glory of survival. Tribute is paid to people who struggle to live and build their wisdom by life experiences and barriers. Due to the vivid images, reading the poem merely superficially and textually can be very enjoyable.

The Fish by Elizabeth Bishop. (2016, Mar 21). Retrieved from http://studymoose.com/the-fish-by-elizabeth-bishop-essay 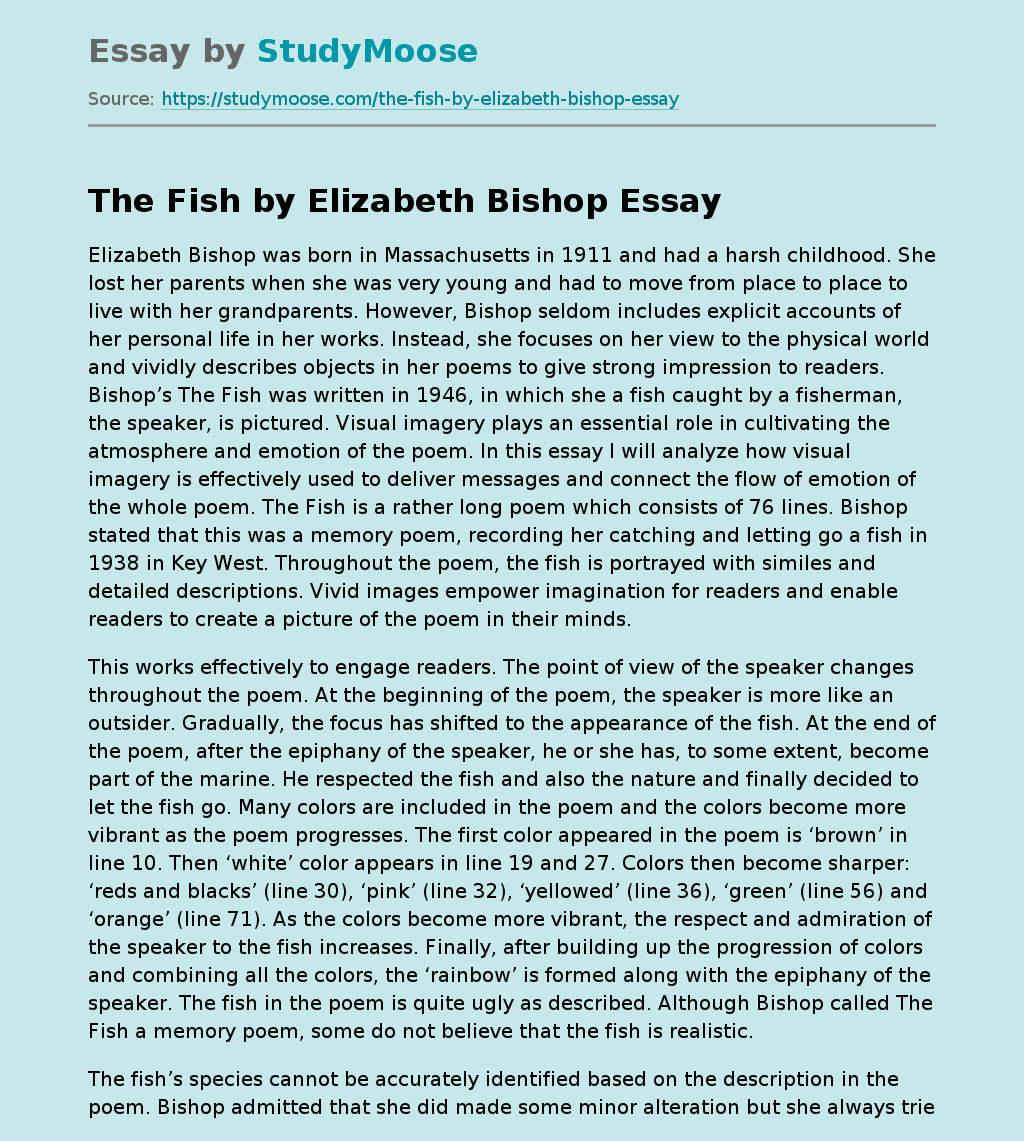