The Metamorphosis: Masks, Strangers and the Existential Anxiety

“I am separated from all things by a hollow space…and I do not even reach to its boundaries” – Kafka‘s diaries (Stine,58)

It is no wonder that Kafka felt such a hollowness between himself and everything around him, considering that he existed within a monotonous, traditional, patriarchal, and habitual society. Such anxiety and separation from meaningfulness in life has not only been utilized by Kafka to practice self-reflection within his own stories but has also been a focal point of a variety of psychological debates.

Don't use plagiarized sources. Get your custom essay on
“ The Metamorphosis: Masks, Strangers and the Existential Anxiety ”
Get custom paper
NEW! smart matching with writer

Friedrich Nietzsche was one such nihilistic philosopher who was concerned and motivated by the purpose of individual and existential suffering. Franz Kafka’s subtle approach to existentialism, as experience by Gregor Samsa, can be illustrated by Nietzsche’s theory of “free spirits”, which introduces masks of “self-deception and irresponsibility as equally essential ingredients in the creative process” (Acharya,40). However, we can utilize these masks as a metaphor for Kafka’s animal or insect transformation, as shedding of the human-mask in order to display the oddities within, rendering the protagonist a stranger.

However, since human beings are often afraid of the unknown, Gregor Samsa’s Metamorphosis forces him to become the “other”, “the undesirable”. Kafka underscores the issues of isolation and existentialism, through Gregor’s actions, encounters and experiences as a dung-beetle or as a stranger within his own house.

In order to understand Metamorphosis and Gregor’s transformation into a beetle, we must first understand Nietzsche‘s take on existentialism and its influence on Kafka’s modernism.

According to Acharya, the author of Nietzsche’s Meta-existentialism, Nietzsche considers the modern human being as a Specter of the world, due to excessive history one that led to her loss to uncertainty, resulting in the individual “no longer believes in herself. “Individuality” itself “has withdrawn within” (20) He suggests that for the modern human, her consciousness and character will differ from who she appears to be, thus leading us to the concept of “Free-Spirit. According to Nietzsche, our minds are not free since they are constructed by significant prejudices that amount of falsification of through, required for obtaining a sense of freedom achieved through self-reflection and creativity(Acampora 54) Thus, masks are unavoidable for the free-spirit who has the “ ability to play, to lose herself in some frivolity or the other from time to time, to inauthentically and self-deceptively place her trust in the herd”(Acharya, 40)

In other words, for Nietzsche masks are sometimes required to masks are required to make sense of human existence, since they differentiate between reality and fantasy. (Acampora 60) However, for Gregor and Kafka, the masks are essentially tools that they require to adapt to their society, so that they are included within a support system, and not isolated from other humans. Unfortunately, Gregor’s character is restricted by a patriarchal society to play a specific role as a “salesman” and “provider for his family. Thus, his transformation into a beetle is but a metaphor for the forced removal of his humanistic mask of a perfect son, due to a breakdown of his individualistic self. For instance, Gregor is shocked when he heard his own voice since it sounds like “from deep inside him, there was a painful and uncontrollable squeaking mixed in with it, the words could be made out at first but then there was a sort of echo which made them unclear” (Kafka, 47-49). Furthermore, Gregor as a large beetle is alienated in every sense of the terms, as illustrated by his struggle to move and control his numerous legs. Since a family-man Gregor was never given an opportunity to remove his mask voluntarily and exercise his deviance; it was inevitable for his mask to crack and showcase his strange and unique individuality.

Pests, vermin or insects are often looked down upon with disgust, that is very similar to how strange and deviant outsiders are treated within our society. Kafka presents Gregor’s deviance not only through his appearance as a pest but also through the reactions of those around him. Ruyu Hung explores this concept through “Caring about Strangers: A Lingisian Reading of Kafka’s ‘Metamorphosis.’”, that
“Under the modernist influence, human beings as rational agents must be able to communicate with and understand each other through a common rational language” and that “respectable human beings are those who have something in common (Hung, 2)

The ideas of communication and existence within a particular group is at the very heart of Gregor’s metamorphosis since it brings about the question of his humanity and whether his treatment by his family members, could be considered cruel and inhumane. Indeed, towards the end, Gregor is all but abandoned physically and mentally from his sister’s disgust to his father and mother’s indifference and repulsion. Hung reflects on this by presenting Gregor’s “beetle hood” as justifying “his being a moral stranger, an ethical alien…Gregor is deserted by his family, and by all of us. He is excluded from their morality circle, the community of their own kind” (6) He is essentially considered the “Other” or an “Outsider”, and is thus “an animal without language, nothing but rotten flesh” (7) However, that is not entirely true since Gregor is still capable of introspection and self-reflection to the very end; a task that could never be accomplished by a simple insect. His family abandonment due to his appearances is perhaps a reflection of society, that will only house individuals as long as they are “relatable” and “resourceful” with an industry based on the consumption of its worker. Indeed, that would seem to be the case for Gregor, who is only considered human as long as he is useful, as the lower-class worker, was expected to be during the Industrial Revolution. As Hung mentions, Gregor’s abhorrent treatment was an attempt to purify the Samsa household, which was an act of torture forced upon a “stranger” (Hung, 7)
Due to enforced traditions and his father’s rules, there already existed a struggle between Gregor’s free-spirit and the social norms of his society. The constrictive patriarchal mask he wore in order to provide for his family, was perhaps what pressured him into metamorphosis as a bug. For instance, “Gregor would always first let go of the door and then throw himself onto a cool, leather sofa…as he became quite hot with shame and regret” (Kafka,379) Gregor’s self-loathing, his existence as a source of income along with his sense of guilt and remorse, displays evidence of introspection and individuality, that is lacking within the entire family. Perhaps, Gregor’s transformation was influenced by his need for freedom from a meaningless life, change and a personal connection. After all, one does not have to function in normal society as a dung-beetle.

Kafka expresses his personal disillusionment with life through Samsa, who is only able to view the “grey” sky, or hides under the cramped suffocating surfaces of his bed in order to retain his humanity in their eyes. However, this has the opposite effect with Gregor’s family becoming more distant, uncompassionate and “monstrous”, with his sister and father abusing Gregor, physically and emotionally. Thus, as mentioned by Nietzsche, the mask is flawed and sometimes these imperfections are required, in order to become an authentic individual. However, the mask is but a conduit for the real self or the free spirit, along with the deviance and strangeness, which according to both Hung and Kafka is an inevitable part of existence. (Hung 8) Such an abnormality while being true for all is not considered to be the norm by our respective societies, leading to existential anxiety. For both Hung and Kafka, strangeness is an inevitability of life and is perhaps what could set us free from “our communal rational life which is comprehended by abstract concepts and ideas so that we forget feelings through our sensory perceptions” (8) Gregor’s transformation did not only symbolize a removal of his human mask but also freedom from meaninglessness in life.

Hung’s analysis of deviance and human nature, brings into focus Kafka’s use of animals within his works to portray his personal and philosophical messages. For instance, according to Franz Kafka and Animals’ author Peter Stine, the animalistic world was more than symbolic to Kafka and represented “a complete harmony … between the development of mankind as a whole and of the individual man past. (p.2) Perhaps a combination of alienation, deviance, and removal from his primary support group, influenced Gregor’s transformation into a bug. For Kafka, Gregor’s appearance as an insect is a response to his self-introspection and struggle with his existence. For instance, Mr.Samsa not only assaults his son with apples that eventually led to his death but also locks him into a dark room. The father’s behavior in this setting displays a shift in the traditional roles, with Gregor’s family change how Gregor’s father thinks of his son as just as an “insect” (63) and not entirely human. Dehumanization of Gregor was not only a result of the social reorganization of the household but was also a consequence of his family’s “neglect, indifference and oppression” (65) It is reasonable to assume that perhaps Kafka utilizes animalistic beings to represent the true instinctual nature of human beings, without rationality or objectivism.

In conclusion, Franz Kafka’s Metamorphosis is a masterpiece that explores themes of individuality and existentialism through the use of masks and the theory of “Free-spirit” by Nietzsche. Gregor Samsa, the main protagonist from Metamorphosis is influenced by the deadly pressure placed upon him by traditional patriarchal roles, into shedding his “Humanistic Mask”, revealing his true metamorphic self of a hard-working and obedient beetle underneath. This shedding of the Mask worn by most humans is initiated by the anxiety one feels about their own existence. Thus, when Gregor Samsa’s transformation is a revelation of his own deviance and strangeness that is inherent in all but accepted by only a few. Kafka illustrates the consequences of gender roles and traditions enforced with patriarchal societies through, imaginary that is dull and “greyed”. Gregor seems to be a reflection of Kafka, in that his despair and helplessness is represented through the breakdown of the masks and exposure of his personal deviance. Similarly, it is reasonable to assume that Kafka often utilized his writing to “heal” or “reflect” upon himself. After all, what another method could prevent one from such desolation and imprisonment within a monstrous society?

The Metamorphosis: Masks, Strangers and the Existential Anxiety. (2020, Sep 17). Retrieved from https://studymoose.com/the-metamorphosis-masks-strangers-and-the-existential-anxiety-essay 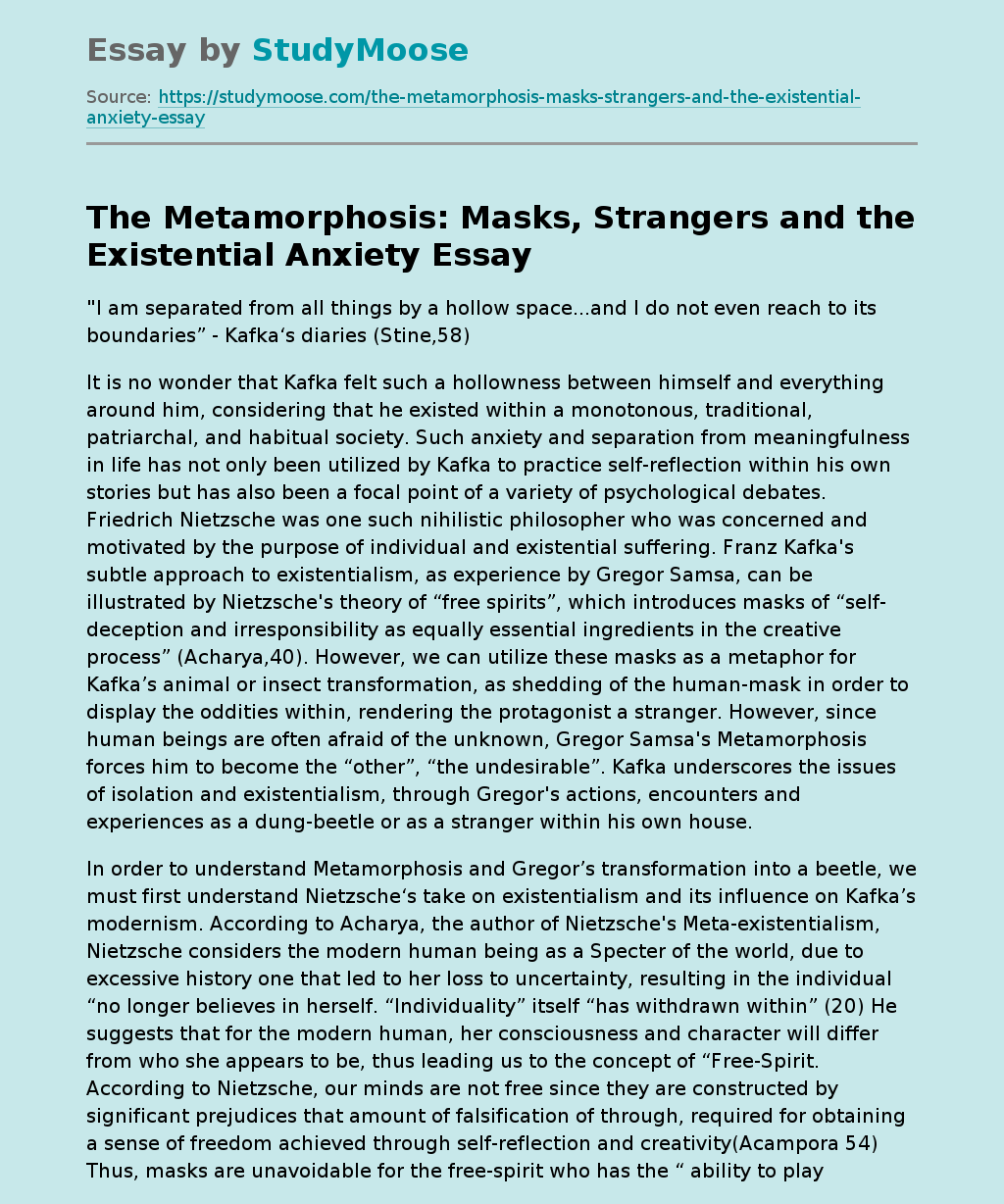